In the event of injury, illness or death howsoever caused while enlisted, any Australian military serving person deserves full comprehensive insurance coverage for themselves and for their direct dependents for the duration of their lives.  Properly and honourably, the level of financial coverage must reflect the inherent occupational risk as a combatant and presume a military life career of income at each advanced rank, role and risk.

The military term “illness” must be medically holistic and necessarily include mental illness, howsoever caused, including any time post-enlistment.

The very instant a member of the Australian Defence Force signs up for active service needs to deem that member a “veteran“, thus automatically triggering comprehensive financial protection under a new national government-guaranteed Military Pension to properly support that member and his/her direct dependents for the term of their lives.

This is the accepted value of serving one’s country, which may involve risk of injury, illness and death.  Such government standards of respect for our Defence Force personnel are proper Australian moral standards.

But a current official study into the mental health status of ADF personnel in 2012 has found:

But the Military Superannuation and Benefits Act is so insubstantial and archaic as to be demeaning for Australian military personnel that it should be immediately revoked.  The Australian Defence Force (Army, Navy Airforce) compulsorily deducts 5% from the wages of serving personnel to pay into the Military Superannuation and Benefits Scheme.  This does not happen in civilian life, so why do ADF personnel have to?  It is only to fund the MSBS with cashflow, almost like a blood bank monopoly.

The marketing by the Australian Defence Force (Army, Navy, Airforce) is that it contributes superannuation of between 18% and 28% per year of your salary, averaged out over your last three years of service.  But who actually gets this as a payout?

Our Australian Defence Force personnel deserve exceedingly better than a commercially vulnerable superannuation scheme, subject to market fluctuations in shares, property and interest rates.  Superannuation was initially imposed upon Australians by Keating Labor’s ‘Superannuation Guarantee‘ in 1992 as a budgetary cop-out to avoid government responsibility to honour paying Australian pensions including to the Defence Force and veterans.

For Tony Abbott to talk of just indexing taxation to military super schemes is an arrogant Liberal snub to Australia’s military.  His Liberal Government has politically in the lead up to ANZAC Day just announced that from July 1, 2014 the following:

Well how mean, thankless and hypocritical?  All Australian parliamentarians (members and senators), who are the ones who vote to despatch Australian Defence Force personnel into combat zones, are themselves comfortable covered under the Parliamentary Contributory Superannuation Scheme.

Ordinary Australians are lucky to get 9% superannuation if they are an employee and their employer actually pays. But then their superannuation is subject to the vagaries of market commerce.

Serving Defence Force personnel MilitarySuper pensions are considered to be taxable income by the Australian Taxation Office.  How so? 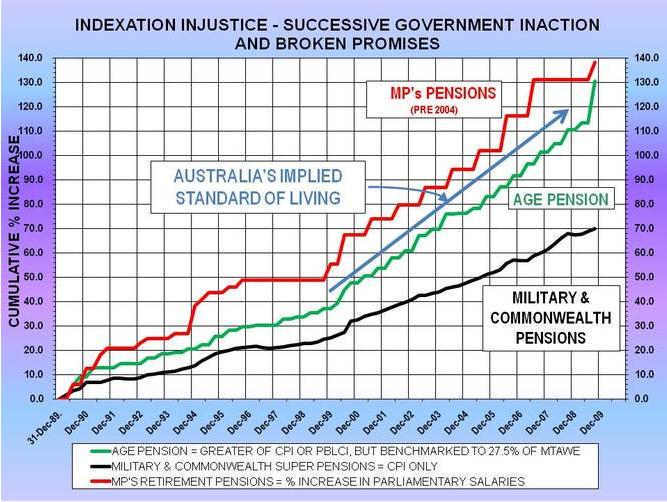 Whereas Australian politicians currently pay themselves an annual allowance of $185 000 per annum.  They receive superannuation contributions by the Australia taxpayer of 11.5% of their annual allowance, and after 18 years parliamentary service they get an additional 5.75% on top.

After eight years parliamentary service, they automatically get a lifetime pension of 65% of their annual allowance.  This is received irrespective of age or additional income. 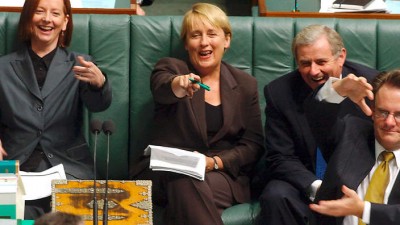 Immediate action should be taken in the Australian parliament to correct what can only be seen as one of the more shameful episodes in the ongoing poor treatment of the men and women of Australia who volunteer to defend their country.

Before Prime Minister Tony Abbott signs off on his just announced $40 billion taxpayer-funded acquisitions of dozens of Joint Strike Fighter aircraft from American multinational Lockheed Martin in Fort Worth Texas, he should live up to the respect deserved of Australian military personnel.

Superannuation for Australian Defence Force personnel should be government controlled and guaranteed as a Military Pension for the natural life of all who have graduated within the ADF.  The pension rate needs to be generous and above that of parliamentarians.  The pension rate needs to be commensurate with service duration, the nature and extent of any active service, rank, role, duties, citations, as well as with the case needs of direct dependents.

Abbott needs to immediately and generously pay out properly and decently to all Australian veterans and their direct dependents who remain unpaid of fair compensation – including those of AHS Centaur in 1943, those of HMAS Warrnambool in 1947, those exposed to radiation during atomic testing in the 1950s, those of the Melbourne-Voyager Disaster in 1964, those victims of Agent Orange in the Vietnam War (1961-1972), those RAAF LAMEs who fixed FIII fuel tanks (1973-2000), the 3000 aboard HMAS Supply and HMAS Melbourne exposed to beryllium dust (1950s-1985), those with symptoms of Gulf War Syndrome (1990-91), Major Martina Jewell, Chief Petty Officer Kurt MacKenzie, amongst other ignored claimants of Veterans Affairs.

Abbott needs to immediately and generously recognise in law that each and every member of the Australian Defence Force deserves Australia’s national government’s full support and backing financially. 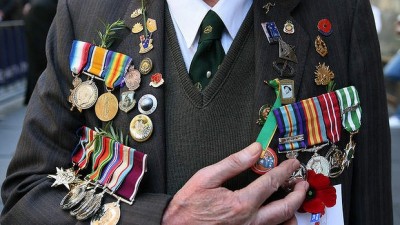 Until then, is it any wonder why traditionally and today Australians have immeasurable respect for our Diggers, but none for our politicians?