Manufacturing workers in South Korea and China earn a pittance that of Australian workers, which is how these third world nations compete with the West like Australia – on their pittance wage advantage.   A free trade level playing field is when South Korea and China have paid parental leave, work health and safety and Australia’s Living Wage – not in this lifetime.

The Australian car industry is going to the wall trying to compete on an upsloped playing field in a head wind against the pittance-waged third world.  All car manufacturing countries are subsidised by their governments, and most cars are now made in the third world.  But naive Liberals, just like Labor, think they can buck global reality and expect Australian manufacturing to somehow compete in a free trade market. Since Hawke’s and Keating’s delusional deregulation agenda in the 1980s and the Button Car Plan, Australian industry has corroded from its former glory days.

The Laborals’ joint solution is only idealist “innovation”, coming from politicians who have never had a private sector job in their lives.

Worse is that they both want to condemn Australian manufacturing and industry further by signing over national sovereignty in Investor State Dispute Resolution clauses in this proliferation of foreign free trade agreements.  It is akin to signing over an immediate power of attorney of our sovereign rights to a foreign power.  Scary stuff and no wonder the terms are being withheld from the people.

Eventually under Laboralism, all that Australians will be relegated to do will be casual fodder jobs of foreign multinationals like Maccas or else as intergenerational dole queuers.

Foreign free trade agreements only benefit foreigners.  Only select exporters who donate to the Laborals benefit at the margin, otherwise no-one has been able to justify to ordinary Australians, how free trade is in Australia’s best interests.

Free trade has allowed cheap manufacturing imports to dump on and undercut Australian industry.  Ford and Holden can’t compete with eastern european and asian wages of the likes of Hyundai, SsangYong and Great Wall.   These brands represent fully imported unemployment.

Ford and Holden in Australia have been haemorrhaging profits.  Over the past five years Ford Australia has lost more than $600 million, so finally last May the company announced it is to close its Australian manufacturing plants in October 2016, with the loss of 1,200 workers at its Broadmeadows (Melbourne) and Geelong plants.

This month, Holden followed Ford in declaring it can no longer compete on costs with cheap imports under free trade and so will close up its entire Australian manufacturing by 2016.   This will end not just Holden, but its components manufacturers.  This means the end of the car industry in Adelaide’s northern suburn of Elizabeth, a planned satellite town set up in the 1950s to support car manufacturing and its workers.

The flow on economic loss to the South Australian economy of Holden’s potential closure is estimated to be about $1.24 billion and a devastating 13,200 jobs gone.

Unemployment in Geelong and Elizabeth is set to skyrocket and become entrenched.  Elizabeth has already one of the nation’s highest unemployment and entrenched welfare dependency.  Both struggling communities are set to become ghettos of housos.

Geelong and Elizabeth are following the industrial demise of Detroit in the United States.  This once great powerhouse of automotive manufacturing, Detroit industry collapsed in 1973 because of its exposure to free trade, notably arab oil price hikes.  Steadily under third world wage parity, Detroit living wages couldn’t compete.  So Detroit haemorrhaged its industry, its workforce, its tax revenue and in July this year sadly declared bankruptcy.

Detroit is now a virtual third world ghost city within the first world United States.  Detroit has become a symptom of the western manufacturing crisis brought on by the politically correct, yet economic illiterate notion of ‘free trade’. 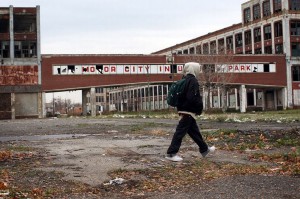 What plans to Liberals have to prevent Geelong, Elizabeth and Broadmeadows following Detroit as a third world ghetto within our first world nation?