This article appeared on the website Jeune Nation. See https://jeune-nation.com/ This site is operated by French nationalists with long political experience. This article is their considered opinion and consequently, it is worthy of attention by Australian nationalists. They set out to explain what those so-called Ukrainian nationalists actually are. (ed.)

Among his war aims, in his speech on February 21 2022, Vladimir Putin announced his desire to “denazify” Ukraine, speaking of “the rise of extreme chauvinism, which quickly took the form of aggressive “Russophobia” and “neo-Nazism”. Hence the involvement of Ukrainian neo-Nazis in terrorist gangs in the North Caucasus and their increasingly strong territorial claims against Russia.”

We can assume without risk of being mistaken that he was targeting in Ukraine, the militants and volunteers who had taken part in the “Maidan revolution” (2013 – 2014) and who then formed themselves into political movements such as the Right Sector or the National Corps, and above all into paramilitary units like “Azov” or “Aidar”. Contrary to Russian claims, we remember that when Andrey Biletsky founded the “Azov battalion”, the initial financing was provided by the Ukrainian-Cypriot-Israeli billionaire, Ihor Kolomoisky, or by another Ukrainian oligarch of Jewish origin, Serhiy Taruta. Similarly, we remember that Dmitro Yarosh, leader of the “Right Sector” and former leader of the Azov battalion, had met the Israeli ambassador in Kyiv on February 26, 2014, to assure him “that the Right Sector would oppose all [racist] phenomena, especially anti-Semitism, by all legitimate means” during and after the “Maidan revolution”.

On the other hand, the intertwining of this small world with the power bloc in Kyiv is very real. It should be noted that these paramilitary movements were directly integrated by the Ukrainian state into the Ukrainian Armed Forces or the Ukrainian National Guard. They have continued to serve the power bloc in Kyiv since 2014, including even after the election of the puppet, playing the role of Ukrainian President, Volodymyr Zelensky. We note further that Dmitro Yarosh has just been appointed (on November 2 2021), adviser to the commander-in-chief of the Ukrainian armies.

Since this colour revolution of the “Maidan”, these Ukrainian activists and volunteers, often presented as “nationalists”, or qualified as “neo-Nazis” by the Russian side, have been sent to the east of the country to “subdue” the revolt of the residents of Donbas. Moreover, they made themselves known and noticed even more by their desire to “beat the mouths” of the Russian populations in Donbas (they were unable to go and do it in Moscow!), and of the other minorities present in Ukraine, who are however also Europeans. But did they stand for the resuscitation of the ideal or the commitment of Stepan Bandera demonstrated during his alliance with the Third Reich from 1941?

So: “Neo-Nazis” in Ukraine? Wouldn’t we really be dealing with “Galician nationalists”, in reality, persons animated by an obsessive Russophobic chauvinism, a kind of imitation of what nationalism really is? Nationalism supposes Nation. However, this ‘Ukraine’ has never been one. It is a territory rich in resources, coveted and tossed about between its various neighbours and powers throughout history, from the Lithuanians to the Russians, passing through the Poles and the Austro-Hungarians. We are dealing today with a revengeful nationalism which tries to impose itself on the various minorities (Poles, Hungarians, Romanians, Greeks, Bulgarians and of course the most numerous, the Russians) who live in this territory known today by the name of ‘Ukraine’ and whose current borders date only from their absurd delimitation by the Soviets from 1939. Moreover, let us also remember that nationalism is part of a third way ideal, absolutely excluding serving one of the two enemy brothers that are international capitalism and socialist internationalism.

Now, these Galician chauvinists have put themselves at the service of Yankee “soft power” against Russia, in return for funding, military instruction, materials… as the United States knows how to largely provide the enemies of their enemies. They then became their allies of circumstance they forget a little too quickly that the “American friend” has the annoying habit of letting down his obligated people badly when things really heat up. We remember Major Massoud’s resistance fighters in Afghanistan thrown against the USSR, the Christian resistance fighters in Lebanon thrown against the Palestinians and the Syrians, the Shiite minorities in Iraq in 1991 thrown against Saddam Hussein, the Kurdish minorities in Iraq again, then in Syria, thrown against Bashar al-Assad or Turkey, and many other guerrillas having played the Yankee game and all of a sudden very opportunely dropped and forgotten by the CIA and the Pentagon.

Insofar as it was Kevin Macdonald who taught us to be wary of the “neo” prefix in his book ‘Le Néoconservatisme, un Mouvement Juif’, we give below the remarkable preface to the French version written by Philippe Baillet, one of the intellectuals of our movement (founder of the review ‘Sparta’). Perhaps the misunderstanding observed in the case of the neoconservatives – they were originally Jewish Trotskyists who were in fact not very conservative (one of their ancestors being none other than Leo Strauss) – and their alliance with certain American evangelists of the Republican Party, can shed light on this alliance. But all attentive observers in any case sense, that Vladimir Putin is not taking action against Ukrainian “neo-Nazis”, but against a power bloc in Kyiv sold to American neo-conservatives, and who have enlisted in their fight opportunistically and by manipulation as accomplices, these Galician “nationalists”.

As far as we are concerned at Jeune Nation, we could salute their tribute to their predecessors in the ‘Galicia division’ who fought for a new order in Europe, trying to prevent and prevent the Soviet surge at the time. A power surge the eastern half of our continent, unfortunately, experienced because of the Anglo-Saxon betrayal! They should remember… But we refuse to acquiesce to a Russophobic, hard-line Ukrainian warmongering, that has been paid for by the neo-conservatives in Washington and the Atlanticists in Brussels, who have succeeded in lighting the fires of a new war in the heart of the continent. How far do we go? Let’s stop being servants of the Yankees and fight for our Fortress Europe instead!

Editor’s Note: we do not produce the Philippe Baillet text here. 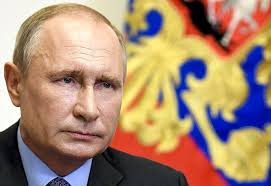 PUTIN’S SPEECH – THE OTHER SIDE OF THE STORY