What a joke ABC’s biased QandA show is branding itself as “Adventures in Democracy”.  Adventures in foreign Leftist lobbying would be a more honest and apt description of what viewers can expect to cop.

QandA artificially flourishes as taxpayer-funded cheerleading for Labor and for Greens-Left politics dominated by foreign interests seeking to steer Australian public opinion.  It operates within a culture of the conspicuously Leftist ABC under the management of Leftist CEO Mark Scott appointed by the previous socialist PM Gillard, and controlled by Leftist gatekeeping host, Tony Jones.

According to the Question and Answer show’s spin, it doesn’t matter who you are, or where you’re from – everyone can have a go and take it up to our politicians and opinion makers.  But it does help if you are foreign and have foreign ideals for Australia, such is Leftist ideology. 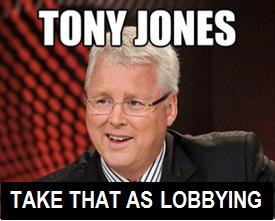 And how much does Jones get paid as a lobbyist?   According to one newspaper freedom of information request, $355,789 a year.  Not bad for a public servant in a non-market economy, yet somewhat short of Mark Scott’s $805,000 salary.  Previous PM Gillard only managed to payrise herself  $507,338 before Australian taxpayers sacked her.

It’s your ABC and they cost you the Australia taxpayer over $1 billion a year, or about $400 from each Australian a year.  Out of that more than 200 ABC managers are paid more than $180,000 a year, travel costs are $50 million a year, and contractors $27 million a year.

But who does the ABC serve?   Who does Tony Jones’ QandA show serve?

Well before going to air, Tony Jones gatekeeps Left political agendas for the show.  Jones receives the Labor Party’s lobbying topics for the week.  He then selects suitable panelists to convey the designed message.

Jone ensures a selective audience, requiring applicants to disclose “which party are you leaning towards? – ALP, Coalition (Liberal/National), Greens, Other – if other please specify.”  If other don’t expect an invitation.    Jones has his selective questions, and vigorously controls time allocations for speakers.  Jones expresses his Libertarian socialist views and controls the direction of debate.   But the ABC claims Tony is only “tapping into the political zeitgeist to keep the discussion focused and on track”.  Sure.

And when someone on the panel says something consistent with the parti pris, Tony hits his secret under desk button to cue supportive audience applause – see everyone agrees so it must be right!

Needless to say, the standpoint of the show is so consistent to parti pris because of Tony Jones’ deliberate omissions.  It is all about maintaining cognitive consistency.  Herr Goebbels would be proud.  QandA is such pure unadulterated Leftist propaganda, the programme honestly should be renamed “Migrant Weekly”.

What gutter did Tony scrape the panelists for his March 31 show?

For starters, there’s the foreign muslim Leftist feminist columnist Mona Eltahawy. “She calls herself a proud liberal Muslim. In 2005 she was named a Muslim Leader of Tomorrow by the American Society for Muslim Advancement and she is a member of the Communications Advisory Group for Musawah, the global movement for justice and equality in the Muslim family.”

So Tony, she sounded politically neutral. But who did the background checks?  She has form for online hate speech, racism toward white men, a criminal record and for being a gutter mouth.  She ****ing well didn’t let QandA viewers down either.

Then there was Kenneth Roth, a human rights advocate supporting asylum seekers, and Ilwad Elman, another foreign human rights feminist based in Somalia, whose father was assassinated in 1996.

Then there was Lucy Siegle, another foreigner, feminist and an environmentalist.

Tony’s token passive conservative for the show was commentator Tim Wilson, who has shown himself to be malleable to message on ABC’s sister show The Drum.  But is he a conservative?  Wilson is the Human Rights Commissioner, a professed humanist libertarian.  Wilson has worked for Liberal and Labor politicians and was policy director of the Institute of Public lobby group advocating free trade, privatisation, and deregulation.  He is an advocate for international aid and development and calls himself a trained carbon accountant.

So a balanced fair panel Tony?  Spot the conservative!  Spot the Aussie!

So what topics did Tony select?

All Leftist topics of Libertarian socialism for a non Australian audience. 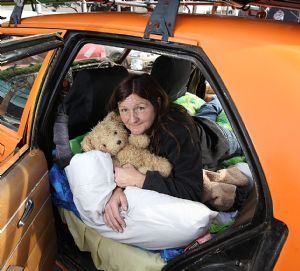 Instead of an Australian focus by an Australian taxpayer-funded ABC, what sort of questions did Tony Jones select from his selected audience?

TIM COLLIER: “Australia has developed a proud multicultural identity with one in three people born overseas, including many from non-British backgrounds. After their abolition 28 years ago, do imperial honours, the return of knights and dames, really have a place in modern Australia?

PETER CONNELL: My question is in support of free speech being the best medicine for the bigotry disease. How can the issue be discussed if a person’s words for or against the issue are forbidden to be used?

IYNGARAN SELVARATNAM: Last week, the UN Human Rights Council finally approved an independent investigation five years after the final months of the civil war in Sri Lanka, during which up to 70,000 predominantly Tamil civilians are thought to have died. This was in the face of mounting evidence that many of these deaths were likely as a result of human rights abuses and war crimes committed by both sides, including the Sri Lankan Government’s armed forces. What does it say about our own Government that has done nothing but openly praise the current Sri Lankan regime and gone to the extent of gifting them with Navy patrol vessels to help stop boats to Australia?

KEVIN BRENNAN: Can I ask you how a beautiful, gentle, civilised country like Egypt can sentence 529 men to death over the death of one person in a protest march? These people belong to a religious group and it is a Muslim country, 80 to 90% are Muslims. Is this the fault of the legal system or the politics?

LAURA MCMANUS: Thanks, Tony. Over the weekend, Prime Minister Tony Abbott celebrated 100 days of stopping the boats. However, just a few weeks ago, the United Nations High Commissioner for human rights said that the recent violence on Manus Island underscored the need to review the resettlement arrangements with PNG and Nauru. In her speech, Dr Pillay mentioned Australia among other serious rights violations, as we’ve mentioned, in Sri Lanka, Syria and Ukraine. Tim Wilson, is it not of utmost concern and an embarrassment that Australia is now known worldwide as a human rights offender and that our government is normalising human rights violations?

ANDREW WILSON: The death at Manus Island was a tragedy. People are obviously desperate when they have paid thousands of dollars to people smugglers and have no hope of coming here. Yet, why did the ABC show no similar outrage for the thousands of deaths caused by the dismantling of the Pacific Solution?” 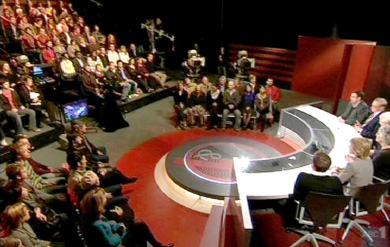 So Tony Jones ends by saying “sorry that’s all we have time for. Next Monday Q&A is live from China.  In a special collaboration with Australia Network and the Shanghai Media Group, Q&A will be taking questions from Chinese and Australian citizens in Shanghai.”

Back on February 3, Tony asked whether the ABC was biased, having ensured four Leftists (plus Tony) on the panel out of seven, including Labor’s deputy leader Tanya Plibersek.  Of course the selected audience were of the Left evident by the spontaneous applause on cue.

And has Tony got a soft spot for Tanya Plibersek?  He has her on next to him it seems almost every second show and gives her free rein to interrupt and deliver tirade to all comers critical of Labor and Left politics.

Host of The Drum, Julia Baird, holds an established journalistic record with Fairfax promoting Leftist causes such as third-wave feminism, transgender rights, multiculturalism and precious cosmopolitanism.  Her discussion of topics on The Drum enforce touchy-feely political correctness.  She’d be an inner Sydney Greens-Left voter for sure.

Cassidy was a former press secretary to Labor’s PM Bob Hawke and clearly a Labor partisan.  Cassidy is frequently indignant of any challenges to Labor’s socialist policies. Disagree on air with his politics such as anyone criticising Julia Gillard for impropriety over union funds, and be talked over and stifled.

Mark Scott’s Leftist lobbying knows that those who control the media content control the opinions of the people.   This is why for weeks now the ABC continues to focus much air time on the Leftist cause supporting so-called “asylum seekers”. 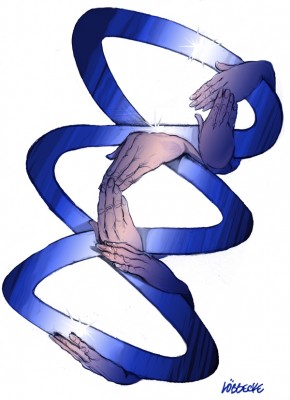 But Scott knows he does not have to provide balanced media.  The ABC Charter, like his sister broadcaster SBS, is supposedly to reflect Australia’s increasing cultural diversity from the increasing waves of Liberal and Labor migration policies.  It is supposedly to educate a cultural enrichment and to reflect the multicultural character of the Australian community.  According to whom?

The ABC Aunty has become multilingual, multicultural, multi-racial.  It is a copy of SBS. Aunty has become an anti-Australian melting pot of foreign humanist propaganda for the Left, and many Australians are turned off and tuned out.