Why would Morry Schwartz, established publisher of Black Inc. suddenly turn and publish a tabloid newspaper in retro-print and borrow anarchist hate scripts for the front page?

This was Morry’s front page in The Saturday Paper last weekend, April 5, 2014.  It is issue six and already the paper has descended into stereotypical political slur plastered with accompanying afterthought lead photo supplied by a self-professed anonymous anarchist. 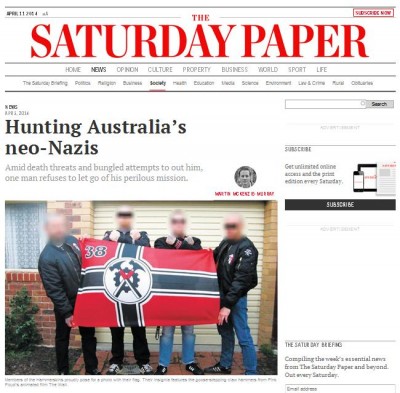 The article ‘Hunting Australia’s neo-Nazi’s is a constructed character attack on the Australia First Party, by a gang of anarchists who last month vandalised the Tempe office of the Party in Sydney.

Within days, the Melbourne-based anarchist website Slackbastard had celebrated the grafitti attack and posted photos on its website.  Subsequent investigations exposed the anarchists involved and linked to the attack. 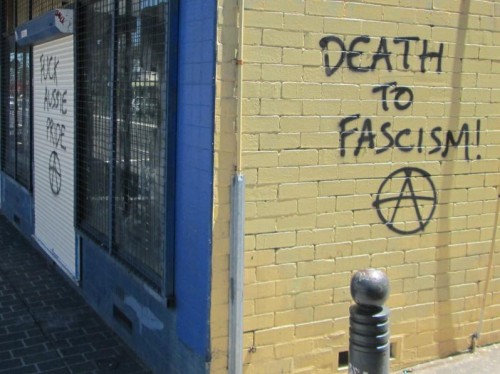 Within the space of a month, The Saturday Paper’s author, its Chief Correspondent, Martin McKenzie-Murray managed to obtain enough details from the lead anarchist, one @ndy Hutchings (alias) “@ndy Fleming“, for a 3000-word front page diatribe.

The Saturday Paper has simply done a copy-paste of the anarchist’s hate and slur text falsely linking Australia First Party to “neo-Nazis”, “boneheads”, “skinheads” and “Hammerskins”.   Martin McKenzie-Murray regurgitates the anarchist text literally on the front page as follows:

“One text read: “Hey you left wing anti white bleeding heart race traitor fukn do gooder asswipe ethnic loving piece of shit ur days are coming to a end asswipe!!! Every one on storm front knows ur true name and identity u piece of shit!! Lmfao watch ur back dog!! :-D.”

AFP has nothing to do with fascism or nazism.  AFP is a grassroots Australian nationalist party supporting traditional Australian values and ideals.

Martin McKenzie-Murray’s article is riddled with lies, smear, misinformation and vulgarity. Read it for yourself:

It is one thing for a political group to criticise another political group. But as a journalist, Martin McKenzie-Murray has breached Australian journalism’s code of ethics for honesty, fairness and independence and has prostituted The Saturday Paper as a political outlet for one anonymous hate-filled anarchist.   Not surpisingly, The Saturday Paper article has itself been celebrated by the same anarchist on his dodgy website:

Author Martin McKenzie-Murray has delivered a black day in publishing.  One commenter, Roger, on The Saturday Paper stated:

“Articles like this are ridiculous and full of inaccuracies. Readers should really take these stories with a grain of salt because ‘Andy’ and ‘Exit’ are hardly reliable sources of information. They may like to think they know what they are talking about, but the reality is that their information is so far of the mark at times it borders on being comical.”

Morry Schwartz, your quality book publishing house Black Inc, and influential Quarterly Essay, The Monthly were doing so well.   Have you fallen into the wrong crowd?

Coincidently, Melbourne’s inner suburb of Collingwood is not only the location of Schwartz Black Inc publishing house but a favourite haunt of anarchist @ndy Hutchings (alias @ndy Fleming) and the Melbourne Anarchist Club. 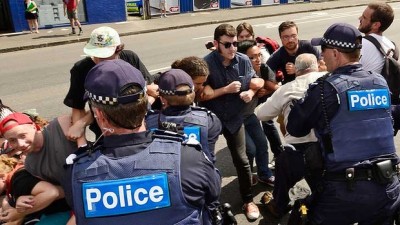 Anarchists mixing it with police in Collingwood in January 2014

According to the paper’s launch media kit: Schwartz is targeting well-educated young professionals aged 35-49, image-conscious, brand-aware and socially aware, creative with high disposable incomes who see shows and travel frequently – that is “metrosexuals”.

The Saturday Paper is the brain child (or brain snap) produced by property developer and publisher 65-year old Morry Schwartz.

Says Schwartz:  “The Saturday Paper is a quality weekly newspaper, dedicated to long-form journalism – to writing that breaks big stories and gets behind the news of the week.” “We will ditch anything extraneous.”

That Schwartz has seconded the likes of sacked Fairfax leftist journalists Erik Jensen and David Marr was a harbinger to where the paper is heading.   The Saturday Paper’s first edition led with a support article on asylum seekers on Manus Island.

Promotion by The Guardian has only confirmed its leftist agenda.  But even the Guardian has warned about print – “up to 80% of the cost of newspapers is in printing and distribution – before a single journalist’s salary is paid.”

Is Schwartz resurrecting his political version of Melbourne’s left gossip rag, The Truth.  Can we expect page 3 boobs and incendiary fabricated stories like “Snedden Died On The Job”?

Oddly The Saturday Paper distribution has defied the Internet and gone retro paper.  Reason?  Indulgence.  But it is an unprofitable business model that has seen many print media go to the wall – The Bulletin, BRW, CFO Magazine and the shrinkage of Fairfax.  Perhaps its mobile app may show promising stats only to lure more cash into a bad investment.

In The Australian, Troy Bramston recognised some good writing, but ultimately dismissed The Saturday Paper as offering an “ignorant, moralistic and simplistic worldview”.