So ABC Leftist hate journalist Joe Hildebrand of derogatory programmes ‘Dumb Drunk and Racist‘ and ‘Shitsville Express‘ notoriety, decides to rub it into disadvantaged Australians by doing a spoof doco on Australian homeless. Nice one.

Joe Hildebrand’s hate toward Australians is destined to wayward his vane overacting career supporting the Green-Left, but isn’t he already a card-carrying socialist? 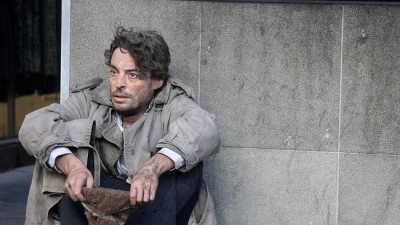 Hildebrand mocked Australia’s underclass by pretending to be a stereotypical homeless man on the streets of Melbourne.  Hildebrand claims that his antics were to raise awareness of The Salvation Army’s red shield appeal.  But his deception is that he well knows as a globalist that the Salvos no longer support Australians in need, but immigrants and asylum seekers.

Back in 2013, media group Network Ten poached Hildebrand from the Seven Network to join its panel-based morning show alongside already announced Ita Buttrose.

Hildebrand:  “Finally with this new show, I can achieve both these dreams.”

James Packer, Lachlan Murdoch and Gina Rinehart had bought into Ten three years ago and seized control of the board.

Watch a disparaging episode of Hindebrand’s ‘Dumb Drunk and Racist’ where Hildebrand incites contempt toward anything Australian:

Watch a disparaging excerpt of Hildebrand’s ‘Shitsville Express’. Where’s his motivation for such vitriol?

Hildebrand: went to Dandenong High School and Melbourne University where he edited the student newspaper, so he claims cred.

Street cred may be. Actor? no. Propagandist? yes.

Desperate Hildebrand after vilifying ordinary Australians as ‘Dumb Drunk and Racist’, he seems to be learning the hard way that hate journalism wins few friends. So this unemployable Joe Hildebrand went to the bottom of the pile, to Network Ten.

Ten’s only goal now is survival.” – claimed Sydney Morning Herald of April 1, 2014. Since then three chief executives and a string of top managers have either been sacked or resigned but the decline has continued.

Hildebrand has become a desperate bottom feeder on the verge.