Germany now has more than 4.5 million Muslims incompatible with the German population.  Most of the immigrants are Turkish Muslims who speak little German and have imposed more than 200 mosques across Germany, in many cases converting Christian churches into mosques. 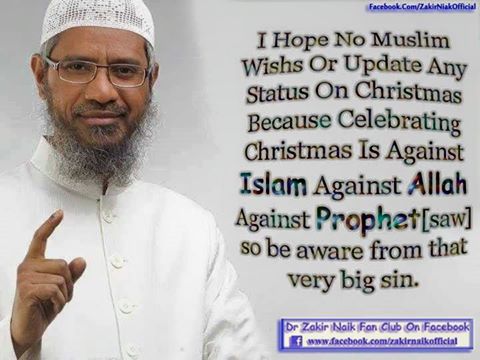 PEGIDA drew 18,000 ordinary Germans in the eastern city of Dresden, police said, equivalent to the same number who joined in its last march there a few days before Christmas, from a grassroots movement that began in October 2014 on Facebook with just a few hundred supporters. 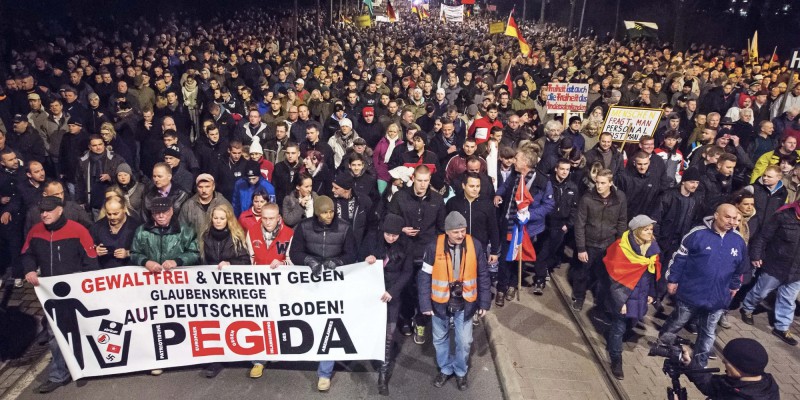 25,000 ordinary Germans joined a PEDIGA march in Dresden January 12, 2015, protesting against the Islamisation of Germany and Europe

Outside Berlin and Dresden, offshoot PEGIDA marches also took place in the German cities of Stuttgart and Cologne.

PEGIDA’s leaders have emphasised that the recent Jihadist terrorist attacks in Brussels, Paris and Verviers (Belgium) highlight the fact that Europe’s Judeo-Christian culture is under threat from “Islamisation” at the hands of immigrants. Also recall in 2004 Moroccan, Syrian, and Algerian islamists slaughtered 191 people in Madrid, and in 2005 Pakistani islamists killed 52 people and injured more than 700 in London.

PEGIDA has sensibly demanded the expulsion of Islamists from Germany including “religious fanatics who have turned their backs on our country to fight in holy wars”.   Many radicalised jihadists from the Middle East are being allowed to return to Europe. This poses an unacceptable terror risk to ordinary Europeans.

Ordinary Germans are reacting to Germany’s unpopular globalist Chancellor Angela Merkel and her ‘Christian Democratic Union of Germany Party’.  She and her party are selling out Germany by imposing millions of incompatible Turkish migrants upon the German people.  Germany under Merkel has become Europe’s top haven for asylum seekers and the world’s number two destination for migrants after the United States.

On January 13, Angela Merkel joined in support for a Muslim solidarity rally in the capital Berlin as the Koran was read under the Brandenburg Gate at a rally shown live on German television.  “Islam is part of Germany,” she said in a speech hours before Monday’s march.  Merkel’s siding with foreign islamists is regarded as a betrayal of German culture and has shocked many Germans. 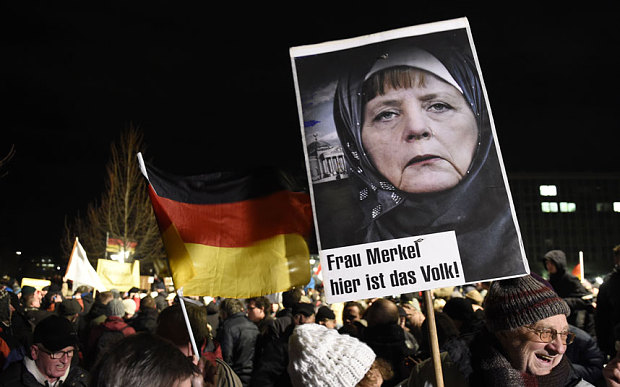 As Islam is allowed to replace Christianity in Europe as the dominant religion, more and more churches are becoming mosques, which increasingly serve not only as religious institutions but also function as the foundational political building blocks for the establishment of separate, parallel Muslim communities in Europe that are based on Islamic Sharia law. 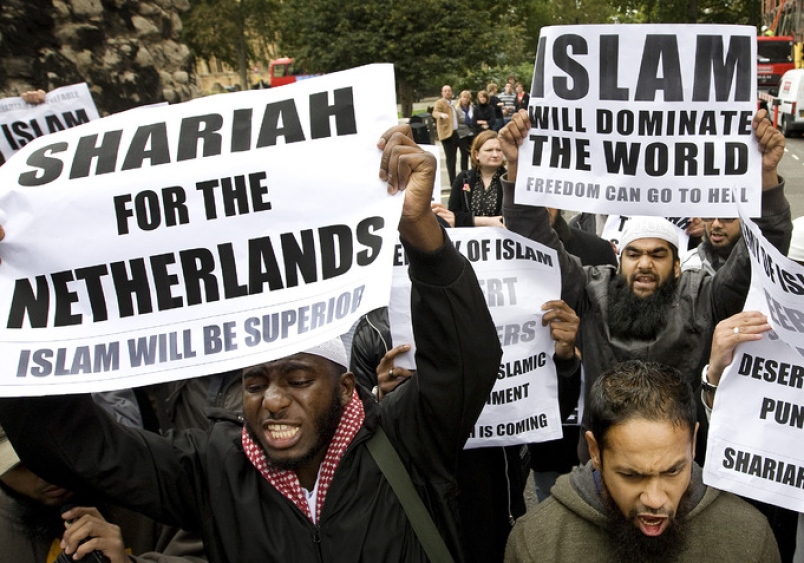 By contrast, there are now more than 200 mosques (including more than 40 mega-mosques), 2,600 Muslim prayer halls and a countless number unofficial mosques in Germany. Another 128 mosques are currently under construction, according to the Zentralinstitut Islam-Archiv, a Muslim organization based in Germany. 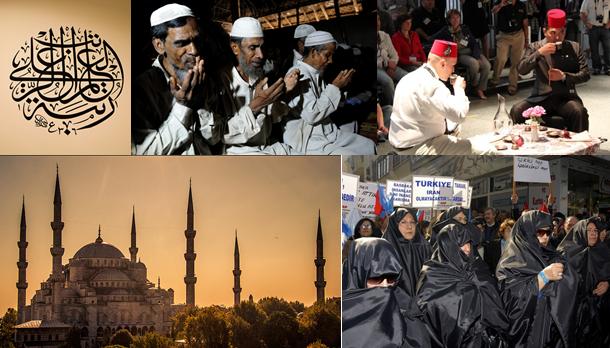 (see translation under image above)

Immigration and the emergence of PEGIDA have prompted heated debate in Europe’s top economy.  A poll for Stern news weekly published last week indicated that nearly 30 percent of Germans think Islam has so big an influence on life in the country that protest marches like PEGIDA are justified.

Merkel has been criticised by her former interior minister for having moved too far to the political centre, enabling anti-immigration and Eurosceptic groups to outflank her on the right.  Merkel is in bed with the Muslims and most Germans have had a gutful of her globalist betrayal of German society to Turkish Muslims.

Of course, as we shall see, ‘outflanking’ Merkel means little if there is not a clear break from a liberal multiracial concept of Germany in the fashion of the National Democratic Party of Germany.

PEGIDA serves to defend not just German Celtic/Christian culture against the invasion of Islam, but to defend the traditional culture of Europe.  PEGIDA recognises Islam as a dangerous barbaric misogynist and violent political ideology that has no place in civilised democratic European society.  That is all correct and it is a big start, yet PEGIDA still accepts the presence of immigrants in Germany, even Muslim immigrants – and is chiefly concerned that they “integrate”. Bachmann has declared the six key aims of PEGIDA:

During weekly demonstrations on Monday evenings, PEGIDA supporters have carried banners with slogans including “For the preservation of our culture”, “Against religious fanaticism, against any kind of radicalism, together without violence”, “Against religious wars on German soil”,[14] “Peace with Russia – No war in Europe ever again” and “We are emancipated citizens and not slaves”.

On 19 December 2014, PEGIDA was legally registered in Dresden under register ID VR 7750 with Bachmann being chair, Rene Jahn vice-chair and Kathrin Oertel the treasurer. PEGIDA also formally applied for the status as a nonprofit organization.

The grassroots PEGIDA movement continues to draw large numbers of participants, and more so following the Islamic Jihadist terror murders of Charlie Hebdo staff in Paris on January 7, 2015.

On January 12, 2015 PEGIDA organizers came together to mourn the victims of Paris, holding a minute’s silence in front of the Frauenkirche to a record audience of some 25,000 participants.

PEGIDA is facing growing opposition by violent anarchists and the growing global neo-communist movement.  It is to be expected. In Australia, we’re use to this treacherous scum. A PEGIDA demonstration in Dresden on December 22, 2014.

The banner’s text reads:   ‘No more lies to us anymore! We are the people!‘

At the beginning of December 2014, PEGIDA published its manifesto. We publish the points. However, we note that PEGIDA still clings to the idea that refugees could be admitted, that aliens should integrate, that Germany should express ‘sexual freedom’ rather than traditional values, that refugees should be shared across Europe.

The National Democratic Party of Germany makes it very clear that it is the mass of PEGIDA followers and not the PEGIDA leadership who are to its interest. They have seen a problem and they have strated to act. We publish the PEGIDA points so people can see the mixed-up nature of PEGIDA – but note it is like Hansonism in Australia. 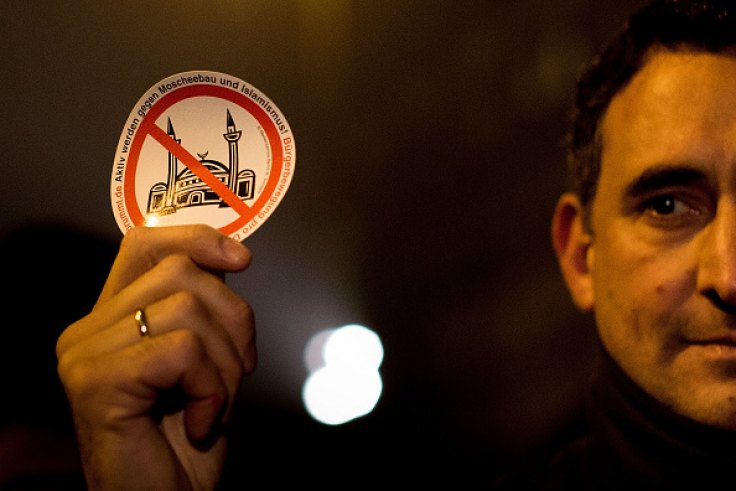 Peace Symbol of PEGIDA across a Christian Europe

PEGIDA accuses the mainstream media of politically correct bias and so refuses dialogue because of its messages having been manipulated to the public.  Consequently PEGIDA distrusts the mainstream media.  Its demonstrators have been chanting “Lügenpresse” (liar press).

PEGIDA is right on that point at least and it has opened a debate on multiculturalism now engulfing Germany.!

Dresden University of Technology (TU) interviewed 400 PEGIDA demonstrators on 22 December 2014 and 12 January 2015. According to the poll, the main reason of their participation are: dissatisfaction of the politics (54 percent), “Islam, Islamism and Islamization” (23 percent), criticism of the media and the public (20 percent), reservations regarding asylum seekers and migrants (15 percent). 42 percent had reservations regarding Muslims or Islam, 20 percent of those questioned were concerned about the high rate of crimes committed by asylum seekers or feared socio-economic disadvantages.

PEGIDA thus far is supported by brave native males (age range 25-50), the participants are mostly employees with a relatively high level of education, many holding a degree and upper middle-class jobs or otherwise self-employed.  Their women folk are listening but not yet as politically aware.