Australian borrowers would be wise to switch away from the big greedy banks – Commbank, ANZ, Westpac, NAB, Bank of Queensland, Macquarie Bank and remembering that St George is just a brand of Westpac. ANZ is foreign owned in New Zealand.

Australia’s big banks are a cartel.  They collude on interest rates, they ignore the Reserve Bank, they hate Australian workers and rort Australian customers.

There needs to be a royal commission into Australia’s banks – the banking, superannuation, insurance and financial services industry.

It needs to examine repeated and systemic misconduct by financial services staff and directors; ethical standards; the adequacy of legal regulations on the sector; the effectiveness of bodies that take and hear customer complaints; lobbying by banks and financial services companies of political parties,  unconscionable conduct towards customers, interest rate gouging and collusion, financial over-exposure to foreign nations and companies, insurance rorting and contractual breaches, and more. 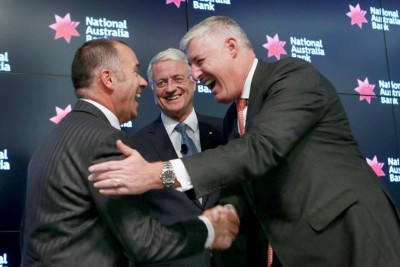 Last June, the Commonwealth Bank announced 150 staff would be sacked from its Brisbane home-loan processing due to “productivity initiatives and improvements to key processes”.

Finance Sector Union state secretary Wendy Streets said at the time, “For these people, there is almost no chance of redeployment.”

CBA chief executive Ian Narev’s remuneration in 2016 was $8.8 million. He said, “To ensure a smooth transition, we will provide impacted people with at least two months’ notice…developing a compelling resume, networking and interview coaching.”

And CBA is about to cut another 170 Australian jobs from its enterprise services teams as a result of automation and digitisation.

Narev is the one who oversaw the 53,700 instances of digital money laundering.  The case relates to the use of intelligent deposit machines, a type of ATM launched in 2012, which allows customers to anonymously deposit and transfer cash, even when banks are closed.

Oh and the CBA will be closing more branches as well.

In May 2017, the ANZ announced 200 job cuts mostly to its Melbourne office and targeting back-office workers in areas such as marketing and project management.

Bank in 2012, Westpac’s female quota darling, Gail Kelly, an import from South Africa, announced 560 Aussie redundancies due to duplication caused by her $19 billion merger with St George Bank previously in 2008. 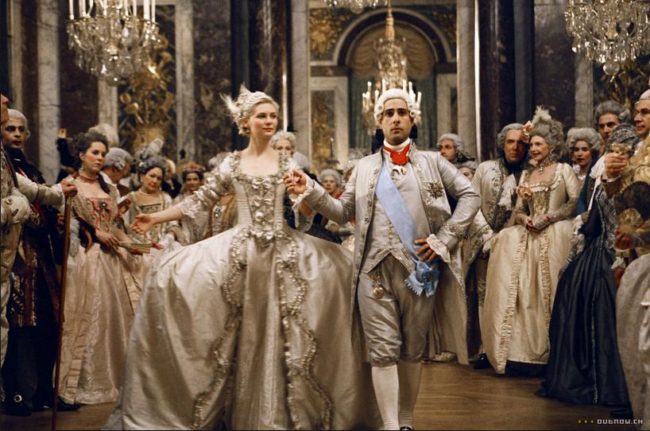 Since then Kelly has sacked 2000 Westpac employees.  But before they left, a condition of staff receiving redundancy was for staff at the bank’s Kent Street offices in Sydney to compulsorily train Indian workers flown in on 457 visas.  All the curry munching eateries in the bank’s food court did a roaring trade at the time.

Of the Indian fly-ins stinking of curry around the Kent Street offices, one Aussie employee facing the sack and forfced to train her brown replacement said of one…

“She has been shadowing me, sitting next to me and I have to teach her how to do my day-to-day job,” Westpac staffer of 15 years, Russell Siachico, told media. “Basically sitting next to me like a sponge, sucking in as much information as possible. It’s devastating. I feel insulted and very low.” 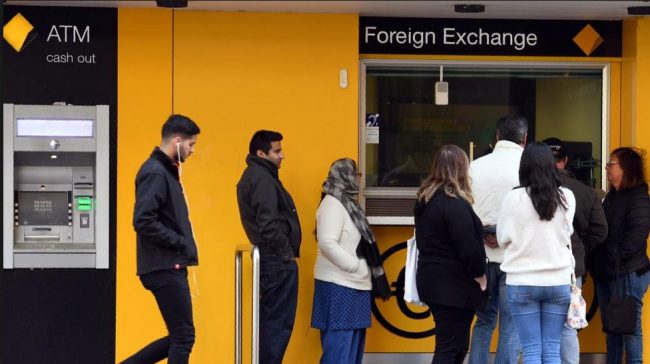 One Westpac staffer said the new recruits “don’t have any experience in testing systems and most of them have never worked in a bank”.  Another said: “It is extremely demoralising to train people who are highly incompetent to take your own role. We get constant stupid questions every single day. Basic tasks that we are expected to perform they can’t perform.”

After the so-called “knowledge transfer”, the overseas workers returned to India to teach their colleagues, who are paid far less than Westpac’s Australian employees. 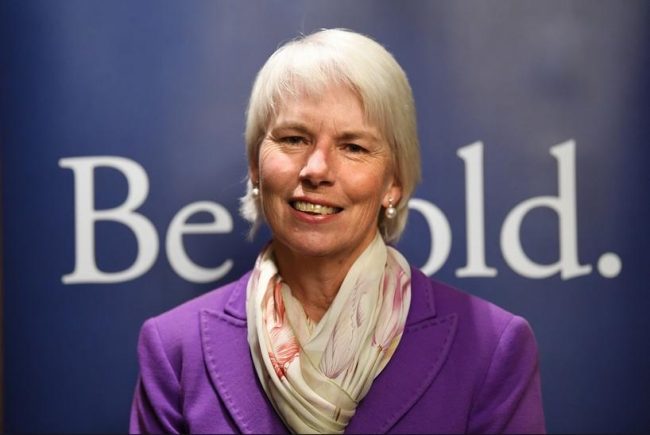 Westpac’s Gail Kelly:  “Be bold, don’t be shy of sacking as many locals as possible in your adopted host country, to get what you want.”

In 2017, the combined profits of Australia’s big four banks exceeded $15 billion in the first half of the financial year.

Over the past five years they have quietly sacked 10,000 Australian workers to get there.

lashed more than 3300 jobs over the past 12 months. This week ANZ revealed its first tranche of official job cuts had begun, with 130 workers fired. CBA and NAB are expected to follow suit.

Most of Westpac’s ditched staff have vital roles ensuring the bank’s IT systems – such as internet banking – are free of bugs that could result in customers’ salaries not being paid on time or mortgage settlements not being processed correctly.

The overseas workers are contracted to Westpac by outsourcing companies including Infosys and Tata Consultancy Services and have been brought to Australia on the employer-sponsored 457 visa.  FSU NSW acting secretary Veronica Black attacked Westpac, which made a $6.9 billion profit last year, for asking staff to “effectively facilitate the destruction of their own jobs”.

The Commonwealth Bank is to offshore critical IT functions to India because it is cheaper than trusting Australians to manage it.  And who is behind the idea?  A foreign ethnic, CBA’s information security boss Yuval Illuz on a 457 visa from Israel.

According to a 2013 Trustwave Global Security Report on 450 global data breach investigations, 63% were linked to a third-party component of IT system administration.

John Yeo, Trustwave’s European director warned at the time, “Organisations are too quick to fight up the cost savings of outsourcing, but don’t really have an appreciation of what security risks that may introduce. The third-party evaluation process tends to be focused on costs and service level agreements, without security being a real consideration.”

The report warns that outsourcing IT and business systems saves money only if there is no attack. 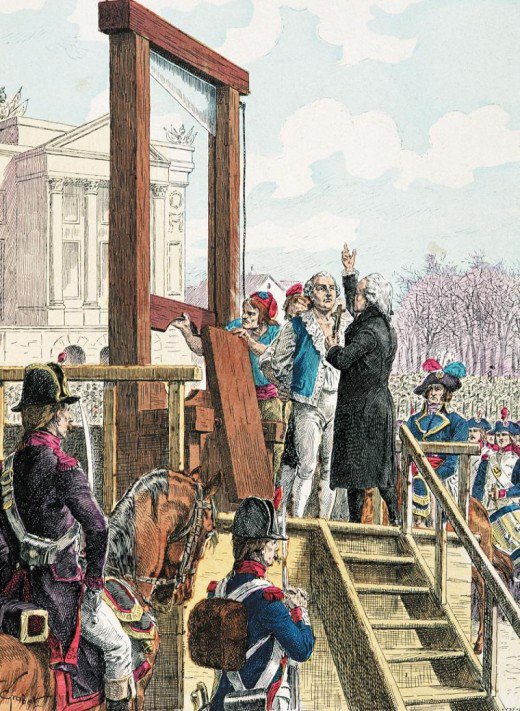 The Big 4 banks reckon they’re squeezed by economic, regulatory and competitive pressures, so cost control remains the key focus.  Macquarie Bank suggests each of the big four could cut costs of between $400 million and $700 million over three years. Macquarie’s CEO Nicholas Moore is on $18+ million a year, poor chap.

With staff expenses making up an average of 57 per cent of expenses at the big four, compared to technology accounting for 17 per cent, it is not surprising that analysts are focusing on how much further banks could go to pare back their staffing levels in the face revenue headwinds.

At its full-year results in November, ANZ said it had culled 3600 jobs in the past financial year, representing 7 per cent of its workforce. Macquarie believes that ANZ has additional scope to reduce headcount as it refines and simplifies its presence in Asia.  Bank expenses related to operating branches have more than halved since 1992, according to Macquarie.

Among the findings by Macquarie’s Victor German was that a growing number of employees on higher salaries could not be justified in an environment of subdued revenue growth, except CEOs.

KPMG’s Asia Pacific head of banking Andrew Dickinson said both frontline and back office staff could be targeted over the medium term to long term.   “In five years’ time, the banks will have about half as many branches as they have right now,” he said.  “Control functions such as risk, internal audit and finance will be much more automated in the future. Its early days, but we could see from one third to around half of those roles taken out as a result.”

Dicko is expected to of course keep his own head.

Only merchant banker Malcolm Turnbull stands in the way.