As a progressive update to our first report at 1.30 pm, which we will leave below as it contains relevant facts, the so-called ‘Antifa’ and extreme-left counter-rally against Australia First in Brisbane today did not emerge.  At no time did their counter-rally mass more than about 50 persons.

But out of Left field, the CFMEU did.  Why CFMEU Joe Myles ?

What was decisive in the events of the day was a small group of CFMEU leaders with some shop-steward associates all of whom lurked about from the start. Whoever the Union thug leaders were, they were not small-fry in the union’s affairs.

Almost at once as the initial group of Australia First supporters began to assemble at South Brisbane’s Musgrave Park, there were threats of violence, scuffles and the theft of a flag by CFMEU heavies. 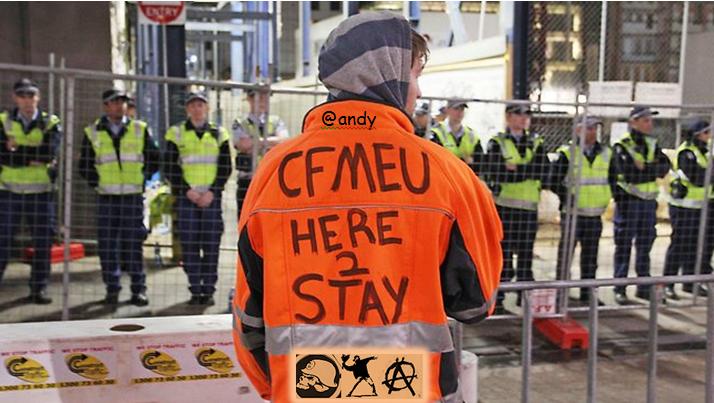 However, at a certain point about twenty minutes later, some of these CFMEU officials and stewards entered two building sites situated very close by and told the workers – ‘something’. We are yet to establish what this ‘something’ was.

However, we have some reason to believe that they were told that we were supporters of Campbell Newman’s laws on associations and that we were opposed to trade unions. Hardly.

Once organized around the lies of the CFMEU organizers, a stream of persons left their work on the sites and joined in a series of assaults; some others who also left the sites just stood by and watched. Australia First members were compelled to punch on with about thirty persons. Although some of our members sustained some minor injuries, they gave as good as they took. This was positive.

It is our opinion that today’s attack was premeditated. It was surely planned yesterday-  after Antifa contacted the CFMEU.

A certain leader of the Antifa contingent today boasted a couple of days ago, that she “would involve the union”. It was planned yesterday, because these CFMEU officials knew of the building sites nearby the Australia First assembly point and were able to strategically plan their response.

It is ironic. If readers go to the website of the CFMEU (Queensland), they will see an advertisement right at the top against the use of contract labour in Australia. Australia First has railed against this for years. It is just that the criminal clique at the core of the CFMEU cares zero about that policy, but serves the Labor Party and its immigration policy.

It is significant that at this time of the assaults many of the police in the area seemed to ‘disappear’. Certainly, no one was arrested.

It is understood that one Australia First member is a unionist and has contacted his union about the assaults not long after they occurred. This union disavowed the alleged actions of the CFMEU gang and said it would investigate behaviour on the sites and determine if anyone knew of the matter or had breached work rules.

In due course, the Australia First members withdrew from the area to relocate the demonstration to the city as had been planned. This was done by a circuitous route and will report on that another time.

However, this gang of CFMEU leader-scum did not let the matter rest.

Some hours later, after the Australia First members had been into the city (by another route to protest), they were stalked by a group of men to a hotel in Woollongabba. The dozen or so activists who had moved on there after the rest dispersed, were enjoying a quiet drink and discussing the day.

Suddenly half a dozen men stormed into the hotel and launched into a violent assault upon the activists. Before they could effectively fight back several blows were landed and the hotel disrupted. The men then fled on foot. It is understood there is CCTV footage of the attack.

A couple of activists experienced minor cuts. However, their spirit was undeterred.

The responsibility for the two phases of the violence today does not rest with any worker tricked into action by the CFMEU leader-group. It rests with this small core of union officials and organizers. That must be so as no ordinary worker or union man would deal with the anarchist psychos or accept their call to violent action.

This group of leaders must also be eminently identifiable. Whether they are ever identified in the ‘normal’ way is uncertain. Certainly, Australia First will not allow the matter to rest.

It is clear that this small gang of union leaders committed an overarching crime today – but worse than any crime, it was a blunder. Where the affair will lead, many can guess, but it will not be Australia First Party which comes off with any ‘loss’.

The Antifa cowardice was in some ways expected. Safely away from us waving flags and shouting slogans, they did not do any of the hard work of the day. It was left to a small criminal gang. We respect them for their ‘honesty’.

Round one over. Round two.

As it is happening:- 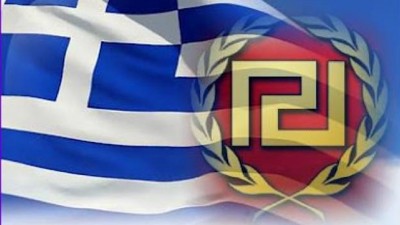 Jim Saleam says – “we provoked you and you responded.”

As this article appears, Australia First Party members and friends in Brisbane are standing beside supporters of Golden Dawn, calling for the Greek authorities to release party leader Nikolaos Michaloliakos and his colleagues.  Despite disruption, our plan remains to picket of the offices of the Consul-General of Greece today. We will update this report later today.

We gathered at Musgrave Park opposite the Greek Club in South Brisbane. We were met by a crowd of 200 plus anarchists who call themselves ‘anti fascists’ and assorted other leftists.

They were joined by a small group run by the corrupt leadership of the CFMEU. They must have fronted up, so it could be pretended that their rally was something to do with the working class. We say that in honour of the true May Day, it is the Australian nationalists who represent Australian workers against globalisation.

From a safe vantage point an Australia First operative has photographed the various human dross who turned up to oppose us, noting already that the faces included many well known on the demonstration scene.

All were anxious to stop the march across Victoria Bridge. That part of our general plan became impossible as many nationalists simply could not assemble. The demonstration is relocating.

Jim Saleam has stated for Australia First party twenty minutes ago that “we provoked you and you responded.” It was part of the plan of our organizers that we would flush out the sewerage of ‘anti racism’ and ‘anti fascism’ (as they call themselves), identify them as best we can, test their resources and their resolve.

By the time the demonstration is over and is all over television tonight, the Antifa gang will say that “we stopped them”.

On the contrary, they have stopped nothing.

We are more determined than ever to raise the profile and further the fight.

A statement was issued to some media today from the national president of Australia First Party, Dr. Jim Saleam:

The Australia First Party calls for the immediate release from gaol of the Golden Dawn political prisoners. There are now six Golden Dawn members of the Greek parliament being held on bogus evidence. Some have been held for over seven months. 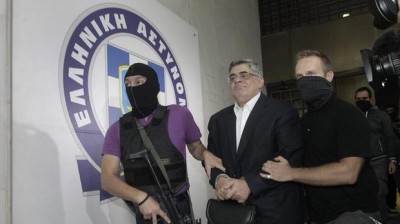 Australia First Party has demonstrated before and will demonstrate again against the unconstitutional treatment of the Golden Dawn prisoners who are denied their constitutional right to vote in the Greek parliament, some being even arrested contrary to Greek constitutional  law. They should all be bailed until the charges can be dismissed.

It is known and openly talked about by masses of Greeks, by other politicians and academics, that the charge of “criminal association’ is nonsense and is designed to ban a party by legal trickery when the Greek Constitution says that no party may be banned. We say that the other evidence of minor crime against them is either meaningless or fabricated.

It is now clear that the case against Golden Dawn prisoners – is unravelling.

Yet even so, the government of Samara is planning to gaol further Golden Dawn parliamentarians in order to stave off the inevitable electoral disaster of his New Democracy party in the municipal and European polls later this month. These imprisonments may take place  as early as Monday.

The public exposure of the manipulation of judicial process by the government is just a fact and even demonstrated by means of secret recordings produced by Golden Dawn in the Greek parliament.

Australia First Party will stand with Golden Dawn until its legal victory and we will work with our brother party as it fights to rescue its country from economic takeover by the globalist institutions and its destruction through Third World immigration.

Freedom for the Golden Dawn prisoners!

Those rallying against us today have links to the Greek anarchist cell which murdered two members of Golden Dawn last November. This cell is strongly believed to be connected to elements of the Greek secret police. Antifa in Australia also has links to state agencies and Zionists. As ultra globalists willing to confront nationalists, they serve the secretive agenda
of others.

The struggle continues until victory.”