What ever the Gillard touches turns to shite – education devolutions, carbon tax or otherwise.

This week it’s been the NBN asbestos avoidance scandal that her delegated Yes Man Stephen Conroy and that her other Yes Man Bill Shorten was notified of the issue back in 2009.  Gillard hates men she can’t dominate.

So it has taken the media to embarrass Telstra and the Gillard about systemic contractor exposure to asbestos at multiple worksites around Australia revealed in Sydney, Ballarat, Perth, Adelaide and Tasmania.

Thousands of homes have been recently covered in asbestos dust during a sub-contractor’s remediation works on old Telstra cable pits in preparation for the NBN rollout.  In Sydney’s west, two families in Penrith have been put up in temporary accommodation after Service Stream – a company subcontracted by Telstra to work on rolling out the NBN – dug into pits that were found to contain asbestos.

Penrith mayor Mark Davies last night slammed Telstra’s management of the crisis, saying council first wrote to Telstra three weeks ago over residents’ concerns that Service Stream workers had left exposed asbestos on their front yards.  “Now they are doing their very best but my criticism is that they were slow off the mark and that was unacceptable.”

Two hundred specialists have suddenly been deployed to NBN sites around the country following a work ban amid asbestos fears.  Telstra has been accused of taking shortcuts exposing contractors to dangerous asbestos fibres, as comparisons with Labor’s disastrous pink batts scheme threaten to derail the $37.4 billion National Broadband Network.

Gillard is sure to blame Abbott for the blowout in costs; anyone but herself.

Federal workplace safety authority Comcare’s chief Paul O’Connor said of the 30 asbestos-related issues in telecommunications pits incidents recorded since 1996, two thirds had occurred since the beginning of January this year – and almost half in the past six or so weeks.  Mr O’Connor questioned whether some workers in the telecommunications pits had been adequately trained to deal with asbestos.

So now Gillard’s Labor Government (NBN Co) , unions and Telstra executives are in crisis talks to address the three year avoidance of asbestos during construction work for the NBN.

Dumb ass fucknuckle Conroy is running for cover under the bosom of big bully Julia. 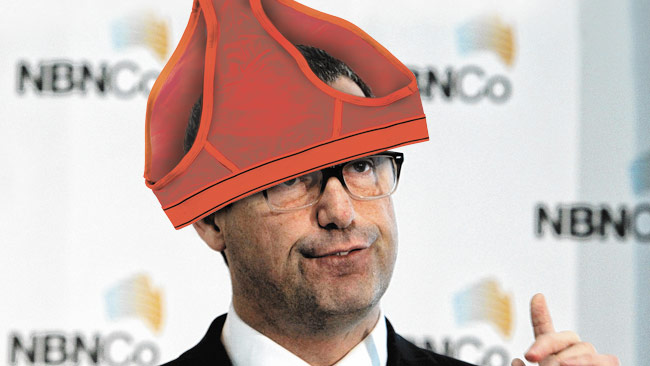 Conroy, you are Garrett Pink Batts all over, and so he’s finger pointing to Telstra, but will likely have to cop union demands for a $100 million “James Hardie-style” fund for affected workers and residents.

And what does Labor’s commander in chief Gillard come out and say today when questioned about the governance of the NBN rollout and whether Labor’s $50 million advertising of the NBN would have been better spent insuring communities were protected from exposure to asbestos resulting from the NBN rollout?

“I suppose we should not really be surprised given that this is the same person who insulted Bernie Banton on his death bed.” 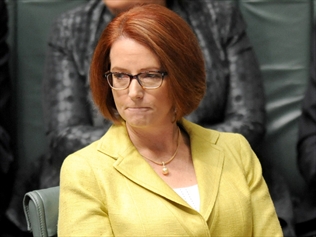