This is Part Four in an ongoing investigation and expose of the anarchist / Antifa movement and the strange concessions offered to some of its activists by state and media forces.  (NB: In discussing ‘Fairfax’, the author refers to the coterie of propagandists at its core, not to the subsequent owners of Fairfax Media, currently Nine Entertainment.)

‘It has long been clear to Australian nationalists and other patriotic people that the old Fairfax apparatus has been a determined agency producing regular ritual-defamation of their movements and activists, liaising with political police to spread disinformation and to incite ‘Right’ and ‘Left’ against each other to the advantage of the state.

We pull no punches here and have denounced the Fairfax stable continually over time on these grounds.

In the period after 2014 when a so-called anti-Islam ‘patriot’ movement emerged Fairfax played the symbiotic role of ‘reporting’ on this movement and on its street level opponents on the extreme-left, particularly the anarchist controlled Antifa.  Fairfax was aware that the main anarchist network organizing tool was the ‘Slackbastard’ centre. Its website and Facebook page under that name directed the movement and reported and raged and smeared against its opponents. Slackbastard was a collective, but the main ‘Slackbastard’ in the period was Professor Rob Sparrow of Monash University. 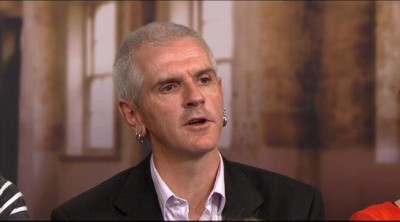 Throughout the period after 2014, Fairfax referred to him as ‘Andy Fleming’ (the code name of the Slackbastard editor) and remained so obliging in maintaining his ‘anonymity’ (sic). At no point did Fairfax say who he was, or proffer the idea that they were ‘even handed’ and would expose the man who incited violence against the persons he considered ‘fascist’.

One would imagine that they would as it was a matter in the public interest. However, the cloak given to Sparrow suggests that he was a lot more than (perhaps, other than?) an anarchist. Of course, they were not alone in that. The Saturday Paper, The Guardian and anyone else in the know, also extended to him – anonymity. Why?

The exposure of the Slackbastard network was taken up by nationalists whose efforts remained also unreported. And even when it was clear who the primary Slackbastard was, Fairfax still remained silent as did the rest of the media.  There is a hint as to ‘why’ in the Alex Gollan affair.

Alex Gollan, a paedophile school teacher, was the publisher of a stalker website called ‘The Anti Bogan’.

Gollan specialized in smears and half-truths and the targeting of individuals he defined as ‘racists’ or ‘fascists’. He would contact employers of these targets and incite harassments. When Gollan was ultimately caught by police (2015) for grooming a ten year old school girl and possessing child pornography, he published a ‘defence’ on the Internet. It was all a lie – as he later simply pleaded guilty, but it was a single set of remarks that make our point here.

Essentially, Gollan said that he had acted for Australian Federal Police ‘exchanging’ data and telling their political section the names and details of servicemen who may be ‘racist’. He called that in aid as a factor for his sentencing. This was outrageous, but it escaped all comment by Fairfax. This information was suppressed. Indeed, one parent wrote that a cabal of journalists seemed interested in shielding the paedophile Gollan.

Basically, Gollan blew the whistle on the Slackbastard group. Despite his confession of being an informant, there was no public addressing of the subject by Sparrow and his confederates. In former times, neither a communist nor an anarchist, nor any extreme-leftist of any sort, would collaborate with state agencies or cooperate with those who did. This rule had gone out the window.

So what then was the Slackbastard group?

This series has mentioned Luke McMahon as a key player in anarchism, Antifa and as a Fairfax scribbler. McMahon had been the secretary of the Melbourne Anarchist Club and had on our estimation defamed in Fairfax media and on Facebook a few persons he clearly reviled as ‘fascists’ (sic).

It was noted that when a member of Australia First was arrested in March 2019 for allegedly threatening McMahon, Fairfax jumped in straight away.

Indeed, Fairfax ‘journalist’ Nick McKenzie had agitated for the man’s arrest in print and then reported on his arrest. At no point did McKenzie mention the connection between McMahon and anarchism.

Did McKenzie know this?

If he didn’t, he was remiss.  If he knows now, what will he do with any future ‘reports’ on the arrested man and upon McMahon’s victimhood?

So why would Fairfax extend a job to an anarchist?

Allow his propaganda to be published in their mass distribution press?

Cover up his real identity?

So just who or what is ‘Luke McMahon’?

In theory, independent journalism would look into this too, but then Fairfax has never been particularly free-thinking.

The Slackbastard group has played the role of an Antifa propaganda outlet. The latter has been consistently promoted in Fairfax media. It has certainly called them violent (while ‘protecting’ Sparrow and McMahon’s identities), but builds their profile for young leftists who may want to challenge ‘the Right’.

On December 12 2015, Fairfax reports a right-wing group celebrating what they were calling a riot in Cronulla in 2005 and Antifa going to challenge them.

“Neither side necessarily is peaceful,” Victoria Police Assistant Commissioner Stephen Leane said last year. “There’s violent protest and violent confrontation every time that they come together.  Andy Fleming, a blogger broadly connected to the Antifa movement, said he did not advocate the assault of Andrew Bolt, though he believed that was not the protesters’ original intention.”

In October 2017, Fairfax reports the split in Antifa. Part of the game also involves demobilizing the tools that are set in motion when their job is essentially done.

And then, we see the terrorism and ‘maintenance of public order’ line promoted. We read:

“Victoria Police Assistant Commissioner Stephen Leane last month accused extremists on both sides of promoting a “mob mentality” – after a bloody clash at a Halal Expo in Melbourne left one anti-Islam protester bleeding heavily from the head and others injured from being punched, kicked and beaten with flag poles.”

“NSW Police Acting Assistant Commissioner Kyle Stewart similarly tells Fairfax Media that while everyone has a right to protest – regardless of their political views – “there is no place for criminal, anti-social, or dangerous behaviour”.

The Fairfax line is simple: Both sides are then extremists. Both sides need to be controlled. The ‘far right’ which was a key target has become embroiled with the Antifa idiots and the state must come in to guarantee order with new laws governing thought and public assembly and so on.

“Anti-fascism advocate Andy Fleming (the pseudonym of a Melbourne blogger who tracks far-right groups) describes such posts as “quasi-hysterical”. ….”

Yet his advocacy of violence draws no mention, something that would be vitally relevant to the new line, if Slackbastard was what he said he was.

Other media has from 2018 taken up the line that Left and Right are equally odious and must be shut down. A so called ‘racist’ rally in January 2019 in Melbourne was reported this way:

Yet this is how the press described them:

Why not ask Rob Sparrow and Luke McMahon for an opinion about what is really going on? They might say something enlightening. After promoting Antifa, is the condemnation part of a political police script about the need to deal with all violent groups? And given that the so-called Far Right and Antifa have virtually evaporated after being named as collective bad news, will Fairfax try to find out where they’ve gone?

When whole groups get dropped down a memory hole along with yesterday’s journalism, we can bet that we are being played. It was the outcome that was desired.

This writer believes we’ll be waiting along time for the Fairfax crew to write an account of what the Slackbastard group really was.  So, let us leave them with this thought: we suspect it was some sort of controlled or at least manipulated operation to incite the anarchists against people it said were fascist and far-right and then ultimately – to sink anarchism as well. Fairfax anarchism promotion was also part of that game and hence for them; silence is golden.