This is Part One in an ongoing investigation and expose of the anarchist / Antifa movement and the strange concessions made to it by state and media forces. (NB. When discussing Fairfax, the author is referring to the coterie of propagandists at its core, not the subsequent owners of Fairfax, Nine Entertainment)…

On March 21, a member of Australia First Party, Mr. Nathan Sykes, was arrested by New South Wales police and charged with using a telecommunications device to threaten a certain Mr. Luke McMahon.

Articles written by (ex-) Fairfax journalists Nick McKenzie and Richard Baker referred to the “message bank of a Melbourne freelance journalist” receiving the threats.  And they otherwise described the ‘victim’, Mr Luke McMahon, as “a journalist and lawyer”.

Messrs. Mc Kenzie and Baker gleefully said: “It’s a crime to use a carriage service to menace, threaten or harass another person.”

However, McKenzie and Baker left out one rather significant fact. Did they ‘know’ of this fact and hide it”? Or did they not know it and was it hidden from them? And if so, hidden by whom?

The New South Wales police served Mr. Sykes with a brief of evidence against him just a couple of days ago for ‘threatening’ Mr. McMahon, but also left out one significant fact. Did they ‘know’ of this fact and hide it”? Or did they not know it and was it hidden from them? And if so, hidden by whom?

It seems something just isn’t right.

Why? Because evidence exists that Luke McMahon has been a key controller of the anarchist movement in Melbourne from 2007 until at least 2014.

A document obtained from Consumer Affairs Victoria describes him as both the “public officer” and the “secretary” of the Melbourne Anarchist Club Inc. until its deregistration in September 2014. However, the group continued as an unincorporated body, with Mr. McMahon’s on-going status yet to be defined. 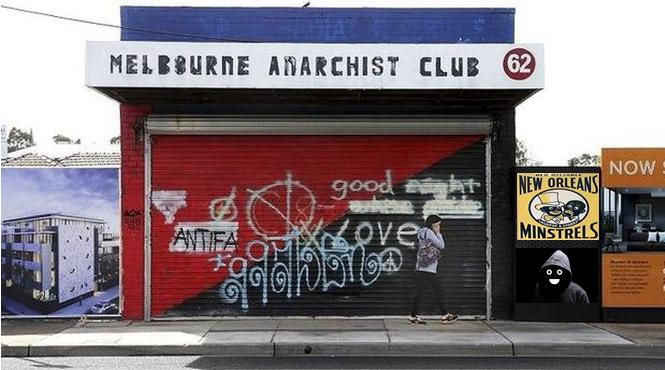 Yes, of course, while any individual anarchist may be the victim of an offence, the anarchist movement in Victoria is not a victim, but a victimiser.

The Victorian anarchist movement’s long history of violence and intimidation is a matter of record and is boasted of in their publications. Over the last five years it has openly targeted people they describe as ‘far right’ and ‘fascist’ with criminal defamation, violence and property damage.

Mr. Sykes had accused their Sydney anarchist mates of threats of violence and murder and of malicious damage to his property. A video camera has identified one anarchist offender on one occasion committing malicious damage offences. However, Mr. Sykes was met with police disinterest and total inaction. Other legal documents show Mr. Sykes had named Mr. McMahon to police in connection with these and other offences. No investigation took place.

“On Wednesday, after The Age and Sydney Morning Herald sent questions to NSW Police, Mr McMahon said he was called by a NSW investigator who promised to re-open the probe.

The following day Mr. Sykes was arrested. The power of the press?

The consideration given to a Mr. McMahon given his political background is truly remarkable. Fairfax has gone to bat for him and security experts call for action against anyone said to harass him.

Was the fact Mr. Mahon was an anarchist (and may well still be one) meant to be hidden from the Sykes defence?

Mr. McMahon’s status as an anarchist will be formally revealed by the Sykes defence lawyer to the prosecution and is now openly revealed here to our readers.

This is a strange and disturbing case.