Well, Canberra has fallen to the first three takeover strategies and the fourth is on in earnest.

NOT THE ONLY ‘DREAMER’ – ADMIRAL BARRIE PREDICTS WAR BETWEEN THE SUPERPOWERS, INVASION OF AUSTRALIA

Admiral Chris Barrie was chief of Australia’s Defence Force between 1998 and 2002. He now warns that war is inevitable between the USA and China – the two superpowers. He says Australia would be invaded and devastated and government itself would collapse.

It is said the war may begin in any number of ways and that Australian leaders are asleep to its possibility.

In 2016, Lorraine Sharp and I penned ‘The True Cause of Australian Independence‘. It was advanced that this inevitable clash will be preceded by increasing Chinese intrusions into Australia – economically, politically and demographically.

The two superpowers have their collaborators in Australia. There are those who believe that the regime in Washington / New York is their friend and to whom they must be loyal for protection (and the extension of the market millennium). There are those who believe that China will make them rich and to whom selling the country is smart business and avoids war, rather than increases its chances.

We would say these attitudes make warfare on our soil inevitable.

There are those (the nationalists) who are neither fooled by the alien system that has battened onto America, nor by the sweet smell of Chinese banknotes. We look towards the goal of Australian independence as the only way out.

There are from our estimation three wars likely on Australian soil: the war among foreign powers for domination, a class-political war between the traitor class and ordinary Australians for political power and the wealth of the nation, and a communal war amongst established enclave migrant groups with each other and the historical Australian Nation.

We must embrace the basics of Admiral Barrie’s thesis. We join this growing set of ‘dreamers’ and it seems we are opining for a nightmare scenario.

Whether Australians survive the century is much in doubt. Of course, the national struggle must and will be fought by nationalists, in the spirit of John Curtin, till victory. It cannot be waged by anything or anyone less.

Are we sleepwalking to World War III?

Australia is plunging headlong into catastrophe and we are utterly unprepared. In fact, we may be past the time when we can prepare.  The time-bomb is ticking and it will explode in our lifetimes.  All certainty will be lost, our economy will be devastated, our land seized, our system of government upended.

This isn’t mere idle speculation or the rantings of a doomsday cult, this is the warning from a man who has made it his life’s work to prepare for just this scenario.

Admiral (ret.) Chris Barrie was chief of Australia’s Defence Force between 1998 and 2002.  He has seen war and sent troops into battle.  Now, he says we are sleepwalking towards a conflict that will alter the world as we know it.

Australia, he says, will be invaded. He fears for the country his grandchildren will inherit.  History doesn’t repeat but it does rhyme 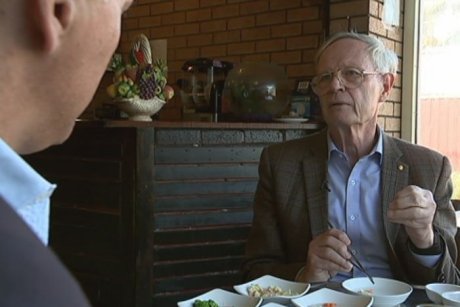 Admiral (ret.) Chris Barrie says a misunderstanding or miscalculation could tip the region over the edge.

Admiral Barrie delivered his warning to me over a Korean barbeque meal in Western Sydney.  I was interviewing him for The Link to get his assessment of the North Korean nuclear threat, but his fears expand far beyond the hermit kingdom.  (China is also a hermit kingdom)

Over kimchi and slices of beef, Admiral Barrie guided me through our region’s many tripwires.  A miscalculation or misunderstanding, he said, could tip us over the edge, countries would be backed into corners and we have no way right now of talking our way out.

This is a warning that comes from our past, and if unheeded, will shatter our future.

“History doesn’t repeat but it does rhyme.”

That quote is often attributed to the great American writer Mark Twain, but its sentiment speaks to us through the ages.

History can appear as inevitable even as we fail to see it.

“Never was any such event, stemming from factors so far back in the past, so inevitable and yet so completely unseen.”

In a new century, simmering tensions and geo-strategic alliances would tip the world into all-out war.

Historian Christopher Clarke’s book Sleepwalkers reveals how the assassination of Habsburg heir, Archduke Franz Ferdinand, on June 28 1914 in Sarajevo triggered a domino effect that pitted the reigning global power Britain against the rising Germany.  The world thought it couldn’t happen — Germany and Britain were each other’s single biggest trading partners; the royal families were blood relatives — yet it did.

How?  Clark says political leaders become hostage to events.  “Causes trawled from the length and breadth of Europe’s pre-war decades are piled like weights on the scale until it tilts from probability to inevitability,” he wrote.

Admiral Chris Barrie says he has been reading Clark’s book and thinking how events then mirror events now.  He is not the only one.  Founding dean of the Harvard University Kennedy School, Graham Allison, fears the world is lurching towards conflict unseen since World War II.  He puts his case in a new book, ‘Destined for War: Can America and China escape Thucydides’ Trap?‘ 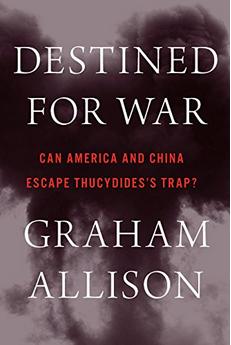 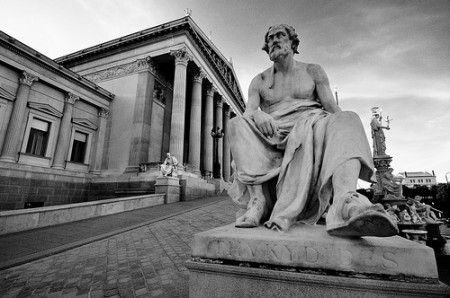 Thucydides was an Athenian historian and general. His History of the Peloponnesian War recounts the 5th century BC war between Sparta and Athens to the year 411 BC.  He was the Greek Historian whose writings about war 2,000 years ago resonate still.

“It was the rise of Athens and the fear this instilled in Sparta that made war inevitable,” he wrote.

Then it was Athens-Sparta. In 1914 it was Germany-Great Britain and now China-United States.

“As far ahead as the eye can see, the defining question about global order is whether China and the US can escape Thucydides’s trap. Most contests that fit this pattern have ended badly,” Allison writes.  On the current trajectory, Allison says, war is “not just possible, but much more likely than currently recognised”.  Any clash between the US and China is potentially catastrophic, but as much as we may try to wish it away, right now military strategists in Beijing and Washington are preparing for just an eventuality.

Global think tank the Rand Corporation prepared a report in 2015 for the American military, its title could not have been more direct — ‘War with China: Thinking Through the Unthinkable‘.  It concluded that China would suffer greater casualties than the US if war was to break out now. However, it cautioned, that as China’s military muscle increased so would the prospect of a prolonged destructive war.

Where would such a conflict spark?

Historian Michael Auslan, thinks Asia is so potentially unstable and insecure that he has questioned the very future of the region in his new book, The End of the Asian Century.

War and economic stagnation are the two biggest risks, Auslan identifies.  “Here be dragons,” he writes.  Mr Auslan reminds us the Asia-Pacific is the most militarised region in the world, it’s home to some of the world’s largest armies, technologically advanced fighting machines, nuclear armed states and added to that a massive American military presence.

To the military muscle add the incendiary mix of history: old bitter enmities, existential stand offs, and a fierce competition for scarce resources.  Much of these simmering tensions coalesce around territorial disputes notably the Diaoyu-Senkaku islands claimed by Japan and China and the islands of the South China Sea.

It is these disputes that most observers fear could escalate.  China has dredged up sand to expand the islands, building runways and harbours potentially to deploy fighter jets and war ships.

Mr Auslan points out that militarising the islands not only allows China to project power but bolsters legal claims of territorial control.

The US has demanded the right of freedom of navigation through the islands and to fly over the disputed territory.  Tension has ebbed and flowed, at one point in 2016, a Chinese state-run newspaper declared war as “inevitable”.

But is it?  Has the first ‘shot’ already been fired?  Some fear the war has already begun — in cyberspace.  The US reports massive hacking by groups controlled by the Chinese military.

In 2015 the Obama administration revealed that Chinese hackers had hacked government personnel files potentially exposing every US state employee. But what of a shooting war?  Certainly the world is very different to the time of Thucydides.  Even compared to 1914, we are a more interconnected, economically entwined global community.

Since the 1960’s peace in Asia has allowed unprecedented growth.  Chinese scholar Wu Zurong, in a 2015 article for Foreign Policy magazine called No Thucydides Trap, wrote of how globalisation and the links between China and the US mitigates war.  China, he wrote, seeks “a modern relationship … a win-win scenario”.

China Soft Power is in full swing at universities across Australia

In a speech in the United States in 2015 China’s President, Xi Jinping, spoke of an opportunity for the two powers to boost global security but he also issued a warning.  “Should they enter into conflict or confrontation, it would lead to disaster for both countries and the world at large,” he said.

Admiral Barrie has looked at how the world can avoid its sleepwalk to disaster.  This week he joined with fellow Australian National University scholars, Roger Bradbury and Dmitry Brizhinev, for an article in The Conversation that measured what they termed “hawkishness” — a preparedness for war — with risk.

They found that a little bit of risk aversion significantly increases the chances of peace.  “Hawkishness alone”, they wrote, “will not lead to war unless risk aversion is also low.”  Simply put, how willing are countries to avoid war? How much do they fear the consequences?

In Asia there are many unknowables. Who is prepared to say for certain, that Kim Jong-un will not launch a nuclear strike?  Would a downed plane in the South China Sea push China and the US over the brink?  Would an attack in Kashmir bring the nuclear armed stand-off between India and Pakistan to the brink?  What would happen in Taiwan declared independence?  What’s to stop any of this happening?

“Risk that should be falling is instead rising. As Asia’s nations become wealthier and have more resources to devote to their militaries, they seem less interested in avoiding confrontation.”

Personally, as someone who has reported across Asia for two decades and lived many years in China, I err on the side of peace.

America is crucial to the stability of the region and we cannot afford for it to retreat or to weaken its resolve. I don’t believe it will.
China for all its military build-up, knows it still cannot compete with US firepower.  Yet, people with far more experience in matters of war than I, fear the worst. People like Admiral Chris Barrie.

How does Allison answer his question: can America and China escape the Thucydides Trap?  He believes our fate depends on realism on all sides, vital interests must be clearly defined, America must strengthen its democracy and China address its failures of governance – threats come from within.  There is a need, he writes, for great thinkers to devise a grand strategy.

Allison concludes with a quote not from Thucydides but Shakespeare (Julius Caesar (I, ii, 140-141):

“The fault, dear Brutus, is not in our stars,

But in ourselves, that we are underlings”

I can think of something else Shakespeare wrote in Macbeth (V, ii, 2)

“And all our yesterdays have lighted fools.

“The way to dusty death.” 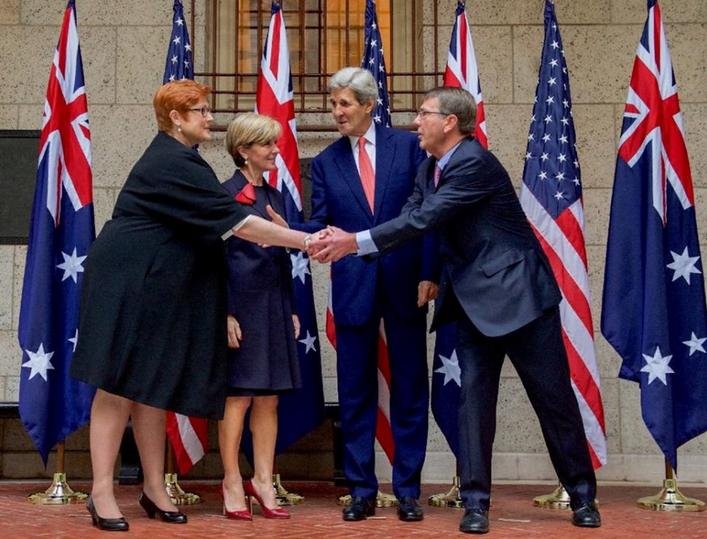