It is the general position of the nationalists that Antifa meets the anti-racist (sic) establishment deep in the bowels of the Australian state.

“Complex stuff”, said a new young patriot, when told this after the Reclaim rally in his city.

Too complex perhaps for the average Aussie concerned person or patriot who might drop in here.

However, when a party or a group brings people out into the street and confrontation occurs, the leaders have to know and appreciate the nature of the opposition in front of them.

On the eve of the July 18 Aussie Patriot Rally in Melbourne, anarchist Slackbastard website incited Antifa violence against the Australians.

Of course, Antifa and other extreme-leftists may go too far, may attack property and police and do other things, but the one thing they do which the Australian establishment agrees with, is that they tries to intimidate people who may question core policies of our ‘democracy’ – like mass immigration, multiculturalism and globalisation. 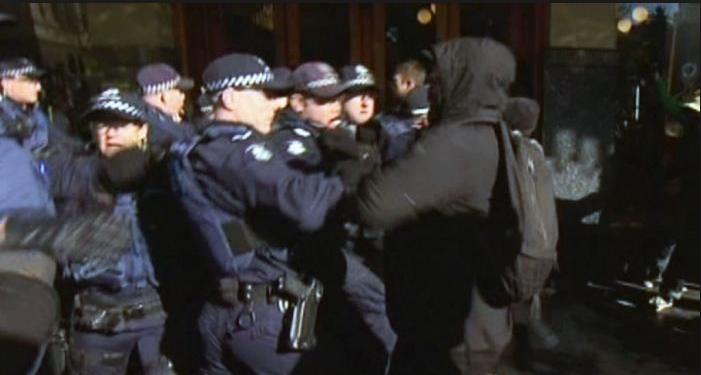 The Melbourne rally was the largest from the Left point of view, but we note that the hard extreme-left that day may numbered in that city no more than 700 – possibly less. When we add up Socialist Alliance, Socialist Alternative, Freedom Socialist Party, Socialist Party and the anarchists – that’s it. It is enough to be effective when married together with other useful idiots who may turn out at a demo, but it is certainly no monolithic bloc of pure power.

These licensed hooligans can and will be politically defeated.

The article below shows that the Reclaim day was a wild affair. It shows the danger in set piece battles.

The President of our party said tonight: “It is time for political guerrilla war.”