Every month in Queensland, muslim blow-ins somewhere demand yet another mosque be built, like in Maroochydore, and locals Aussie have had a gutful. 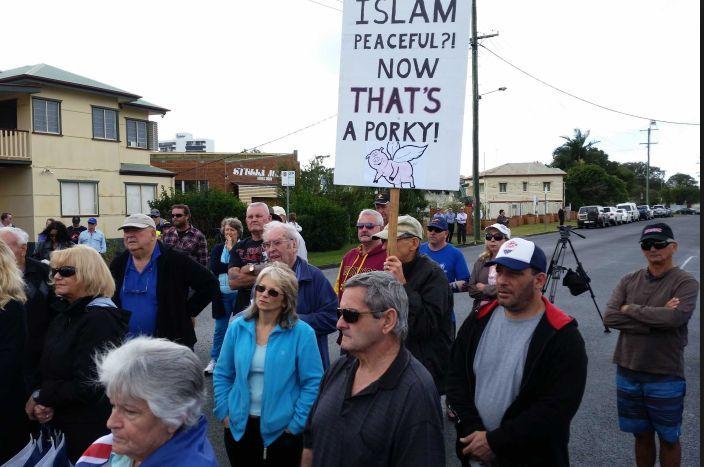 And Queensland Police Commissioner Ian Stewart wonders why there are as many as 150 islamic extremists now needing constant monitoring because they are considered high risk terrorists?

The ‘moderate muslim‘ is a myth.  The silent ones are equally complicit in terror as the ones with the suicide vests, guns and knives. Islamics are on the police watch list because of intelligence, behaviour or their associates and family (Arab muslims).  Most are in the state’s southeast corner. They include teens but range in age, sex and employment status.

It is understood police fear they could become lone wolf attackers, financiers of terror, returned foreign fighters let back into Australia, or someone who intends to sneak into the Middle East to become a jihadi for ISIS. Some suspects have been monitored for years requiring labour-intensive listening, translating and decoding phone calls and digital communication.

Queensland Police reckon they can disrupt planned attacks, especially in Brisbane and the Gold Coast.  But they are worried about next year’s Commonwealth Games.

In the 2017-18 State Budget, the Palaszczuk Government announced it would invest a further $46.7 million over three years for a world-class weapons and counter-terrorism facility at Wacol for the Queensland Police – including indoor firearms ranges, a scenario village, and specialist training areas to increase the capability in managing islamic terrorism. 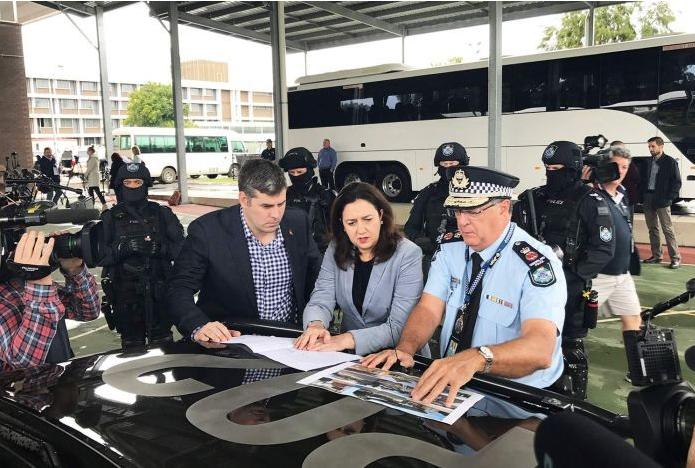 It just shows the scale that Islam is costing Queenslanders, diverting hundreds of millions in taxpayer wealth away from badly needed infrastructure.

The Queensland Police Union president Ian Leavers has called for extra resources from the Turnbull Government has revealed the extraordinary spyware capability available to law enforcement agencies, which are operating under a terror level of “probable”.  Leavers says that while the Federal Government had pumped $1.5 billion into fighting terrorism, the funding had not reached offices on the coalface.

“Queensland police are being swamped with potential terrorism targets we are monitoring,’’ Mr Leavers said.  “The Federal Government needs to step up to start delivering to increase counter- terrorism capability.  “The Federal Government are asleep at the wheel when it comes to properly resourcing the states to fight terrorism and monitor terrorist targets,” he said. “We need a massive injection for resources.

“The only way it appears we, as a state jurisdiction, will get anything out of the Federal Government for counter-terrorism is after an incident, and by then, it will be too late.  “We don’t want to be in a situation where we will be saying ‘I told you so’. We are in a situation now where we are saying we need resources to fight terror upfront.  “This should be a state and federal partnership.”

So where’s dem wannabe jihadi suspects?  Every one of the suspects attends a mosque.  The Islamic Shia Council of Queensland knows but stays silent.  The leftards embrace it as ‘multicultural’.  Islam is a secret cult that needs to be outlawed.

The only culture that should be encouraged in Australia, is our Australian home-grown culture. 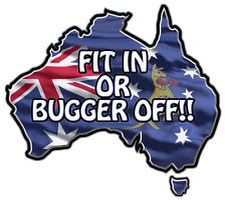 Islamics by the tens of thousands arrive in Australia every year – mainly Sydney, Melbourne and Brisbane.  They come here for the good life.  They reject Australian cultural values, our way of life, English, our dress, our food, our First World standards and Christian morals.  They stick to themselves, in their urban enclaves and ghettos.  They reject Australian child care, kindergartens, schools tertiary institutions.  They demand their own exclusive schools from K-12 and beyond.  They are totalitarian and hateful – female segregation, face coverings, FMG, underage forced marriage.  They demand a local mosque wherever they live. 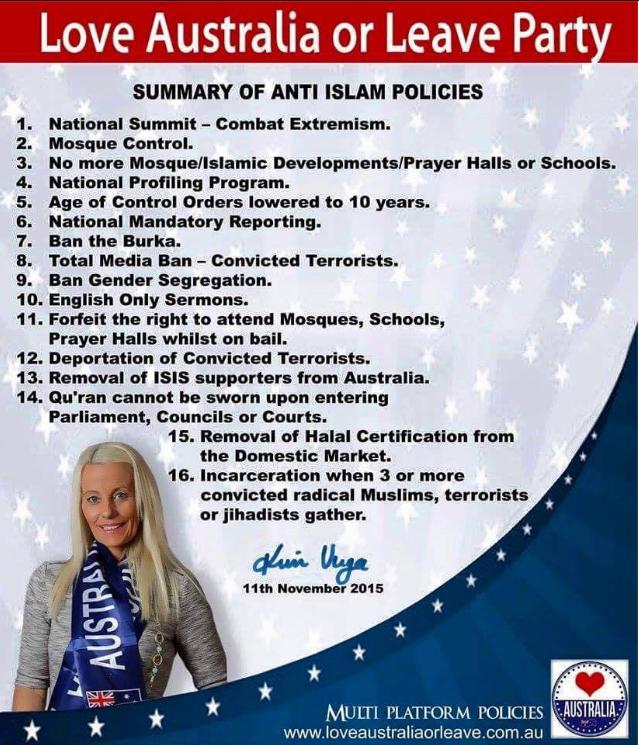 And the Universities in SE Queensland know, but stay silent – they’re desperate for the sharia finance.

They hide Islam as ‘multi-faith‘, but then advertise five prayers a day, with mats and facing Mecca.

But wait for it!  That last one listed at Durack now has plans to build a “Middle Eastern and South East Asian cultural hub” at the school. Give the muzzies and inch and what do you get?

In May 2017, some masterplan for full-blown invasion beachhead has reared its ugly head.  The oxymoronic ‘Australian’ International Islamic College at Durack, in Brisbane’s southwest, has submitted a development application that would expand its K-12 college to more than 2000 students, childcare centre, medical FMG centre, aged care 120 residential apartments, halal shops, and another mosque of course – muzzies only!

The college has done a need assessment study which concludes the development would have an “important cultural orientation towards Mecca”.

The islamic college’s project manager is overseas in Saudi Arabia arranging for sharia finance to fund the invasion.  Yet the same islamic college is still owned $2 million in unpaid school fees by the Kingdom of Saudi Arabia.  In 2012, the college lost its Queensland Supreme Court bid to sue the Kingdom of Saudi Arabia and its education official Ahmad Ibn Mohammed Al Saif to recover $2,140,361.68 promised to them by the Saudi Ministry of Higher Education for educating foreign students.   The court ruled on the grounds that a foreign state was immune from litigation in Australia.

A petition against the proposal signed by 120 local Aussies rightly says NO!  “The apparent exclusivity of the proposed development to a religious group will offer hardly any benefit to the community it is situated in as a whole and is inconsistent with the multicultural community that already exists in the suburb,” it states.

Of course if any Aussie complains on the legitimate basis of Islamic invasion resistance, they are deemed ‘racist and ‘islamophobic’ by the anti-Australian Human Rights Commission.   So local Moorooka Councillor Steve Griffiths has submitted an objection to the imperial masterplan but emphasised it was only on planning grounds, not cultural or religious ones.

It the government won’t listen, and sides with the islamic invaders to destroy Australia, then what do you do?

Meanwhile in 2016, a Queensland government commissioned audit by Deloittes found the Islamic College of Brisbane Board had misused $20 million in Australian taxpayers’ wealth over the previous four years to pump the coffers of the Australian Federation of Islamic Councils – so it can build more mosques and fund terrorism.  Same with the dodgy Malek Fahd ­Islamic College in Sydney.

Now muzzies try to lose weight every autumn.  They call it ramadan.  But pig shooting is seasonal all year, yet what to do with the pig heads?

Well, enterprising Queenslanders fed up with the spreading tentacles of islam contaminating Queensland are sending a strong message that evil islam is not welcome in our country.  A few week’s back, a backpack containing a pig’s head was unceremoniously dumped at the gate of the Islamic College of Brisbane.   Some say on the fence would have been better. 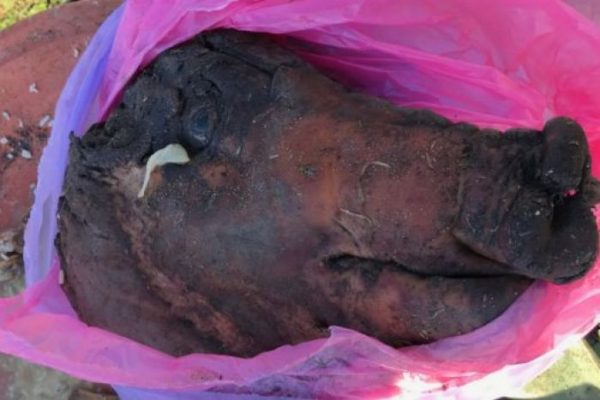 Getting the Message.  Islam out of Australia!