If Tom Sewell isn’t working for the other side, he might as well be. That’s a comment we’ve heard in strict confidence from disillusioned ex-comrades of Sewell who won’t be named.

There is no love lost between this author and Sewell, as is common knowledge, but putting that bias aside, and given that your humble commentator is also a victim of the Nine-State alliance, facing a serious trial on the 15th of March on a fundamentally similar matter, he is in a valid position to comment. Bear in mind, it wasn’t always hostile between us. A difference in politics intervened, and one doesn’t believe he’s been proven incorrect about any past commentaries, aside from the tone in which I couched them. Such is my passion. Nevertheless.

Having been around the traps as long as Thomas has, one might assume he’d garnered enough wisdom about how to handle himself as a public figure representing what Nationalists argue is the misguided cause of National Socialism in Australia. He might have worked out that his theory about accelerating is more harmful to that cause than the heroic kudos he profits by allegedly being seen to beat down a large black man and challenging the propagandist vanguard at Nine.

By potentially being celebrated as a hero by an overseas support base not au fait with Australia, its cultural or political landscape, does not of itself equate with actual success in terms of however he defines such. Indeed, it might only worsen things.

On Monday, Thomas Sewell and a peer entered the offices of Nine’s Melbourne headquarters. They demanded to speak to journalists from A Current Affair which aired a propaganda piece about his group the National Socialist Network (NSN). It was timed to coincide with the current parliamentary inquiry which, despite the suggestion of broader terms of reference in its title, seeks to discuss the proscription of ‘far-right’ groups.

Anyone who is anyone in the milieu that believes it has a stake in this thing has already submitted to the Inquiry, as did I, myself. Don’t expect those to necessarily be published.

Nine’s piece was as to be expected. However, we’re at a loss to understand how Sewell or his group could feel misrepresented. They cannot object to being called ‘Nazis’ because that’s exactly how they’re styling themselves. Moreover, the inevitability of that group’s addition to ASIO’s register of proscribed organisations is not done any favours by the very public activities of the group over the Australia Day long weekend.

This is the trouble they have with Nine’s report, how can they argue with it? They handed ACA everything they needed to produce that piece. Their very existence enabled it. When a large group of uniformed youth are seen gathered at a campsite, chanting ‘KU KLUX KLAN’ and ‘HEIL HITLER’ for whatever purpose or reason that served, it is media gold. The distinctions that the Australia First Party has in its favour when faced by such forces are not the possessions of this group, which has worried a lot of those in Nationalist circles precisely because of its character, and its lack of interest in a genuinely Australian cause. They are lost in a social-media-created world of young people who aren’t informed, are motivated more by youthfully tribal factors, and have established exactly the very bogey this Parliamentary Inquiry seeks to make an example of. We reiterate that point because once established, serious questions follow.

As such, we can only draw together these points. Sewell himself advocates for the kind of publicity being aired, which he had turned up to object to. He highlights it as a crucial means of increasing his support base. He writes off those organisations which do not attract mainstream media notoriety. He writes of the importance of staying in that spotlight. Having said, and given that all his comments and his group’s behaviour are so patently calibrated to that end, what is it exactly he was to object to?

We submit that he wasn’t, but that by making such an appearance he intended to maximise the publicity. He took his 2IC along to film it to be able to present himself and the NSN as victims exposing the lying “Jew” media. But they weren’t engaged in any nobler an activity, so not only was it disingenuous, it was plain stupid because all they did was provide the prosecution free evidence. And it’s more than just the alleged assault, we counted at least three basic areas for charges to be laid between them. Trespass, racial vilification and assault. Sewell is supposed to be the leader.

Moreover, his presentation on the day is questionable. Why did he turn up for an interview (presupposing ACA agreed to give him a platform, which they wouldn’t on general principle, as he should’ve known) dressed like he was out for a jog? The NSN themselves stipulate the importance of acceptable presentation for any public activity and he was dressed with less class than an eshay. Likewise, he conducted himself in strict contradiction of the group’s own instructions. Either it was a decision made on the fly, or something else. . .

Questions will arise over the alleged assault itself. From what we’ve witnessed he is hard-pressed to mount a defence of self-protection. As to his accomplice, he lost any legal credibility being heard to say “Dance monkey dance.” In ASIO’s logic, they’ve just inspired would-be lone-wolf actors both through their actions but also the recklessness of what they did. Right there, the whole act was one likely to make a lone actor feel that there is little point in keeping up appearances if Sewell can’t be bothered.  This episode was such a gift to Nine we’re staggered at what we witnessed. We are so gobsmacked we have to concern ourselves as to what sort of beast Tom Sewell is.

Daniel Andrews has now weighed into the matter of the alleged assault, as has former Labor leader Bill Shorten. The usual mouthpieces were always going to. Abramovich, the most painful of all, is babbling about Melbourne youth marching through the streets with Nazis flags if this thing isn’t stopped. Being a leading Zionist, you can hardly post videos about Adolf Hitler being the greatest man who ever lived, and not expect a Jew to do that. It feeds right into their narrative. And, if it was Sewell’s dream to see that nightmare vision of Abramovich’s become real, he’s just ensured that it never will. Not while he’s alive.

While we imagine that Tom is being celebrated for his fighting prowess and his courageousness (sic) by that milieu we question the latter at least. We won’t speak out of school but if that footage is anything to go by then it seems that he may have allegedly sucker-punched the black security guard.

The most astounding thing of all is that he hasn’t yet been arrested. At least, at the time of this writing. When the Nine state-intermediaries met with NSW Police and ran their story the cops were bashing at Australia First Party headquarters looking for me before the ink even dried. They pulled me out of bed at four in the morning, five detectives, and hauled me in. I never hit anybody either. Allegedly hit, I mean.

Perhaps the Vic Pol is compiling all of its evidence before it collars Sewell. For Sewell’s sake, he better be charged, and I’ll explain what that means.

If given this abundance of evidence Sewell and his offsider has generously provided them with, he is not charged, it will only feed speculation about his nature. He was in the army, after all. Not a long walk from the army desk to . . . Nevermind. From all that we’re told by insiders that have turned away from him, he doesn’t appear to be learning from those mistakes. He is making them bigger.

Nathan Sykes is the author of 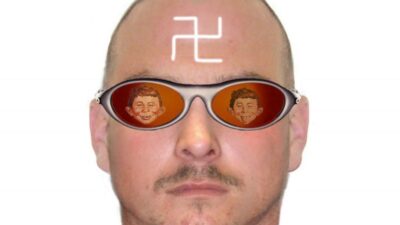