At 2am on July 7 in 2019, mine worker Jack Gerdes (27) died from falling into an excavator at NRW Holdings’ Baralaba North open-cut coal mine, situated west of Gladstone in central Queensland.  On June 26 David Routledge was crushed to death when a mining wall collapsed on to the vehicle he was operating at Middlemount Mine near Emerald in central Queensland.  The mine is a joint venture between Peabody Energy (American) and Yancoal (Chinese). 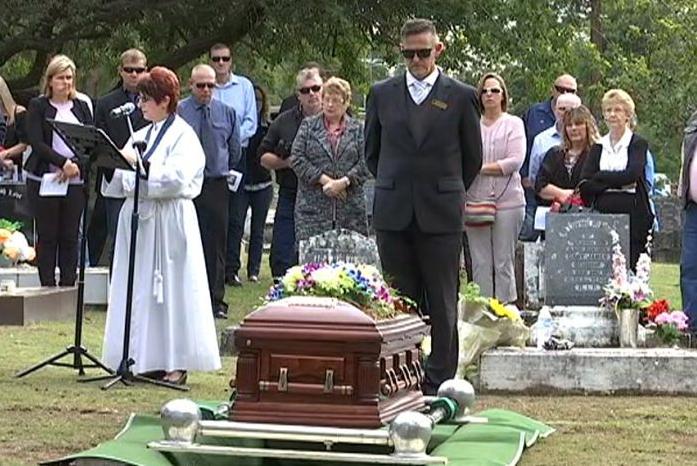 On February 20 in 2019, mine worker Bradley Hardwick (47) while operating a grader underground collided with another mining vehicle at Anglo American’s Moranbah north mine, situated southwest of Mackay.   Another six mine workers sustained a mix of serious injuries to their face, neck, back, shoulder and spine.

Queensland’s 24/7 mining and quarrying industry has suffered six workplace deaths over the past year.   On New Years Eve December 31 in 2018 mine worker Allan Houston (49) was killed at BHP Billiton’s (BMA) Saraji open-cut coal mine southwest of Mackay while driving a dozer at around 10pm when it went over the edge of a bench (slope), rolling a number of times before coming to rest in a body of water.

In February 2018 a mine worker aged 23 at 4am at Glencore’s Collinsville coal mine, fell 10 metres on to a conveyor belt and become trapped suffering leg and spine injuries. Glencore is Swiss owned.

On Sunday July 29 in 2018 quarry worker Adam Malone while driving his last load of the day operating an articulated dump truck at a quarry near Collinsville, lost control and it overturned (below) pinning him under the cab.  He later succumbed to his injuries. 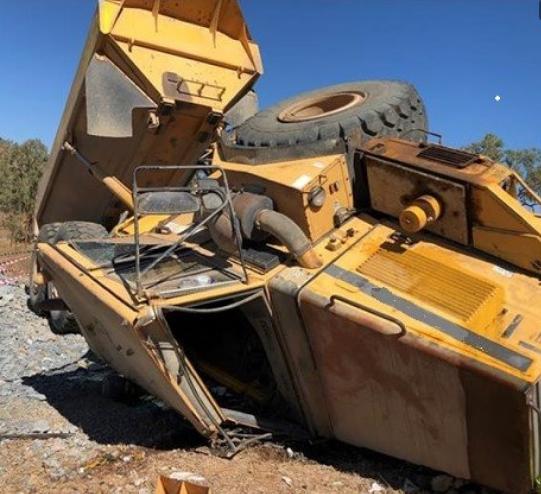 On August 5 in 2017, mine worker Daniel Springer with Independent Mining Services while undertaking welding work on an excavator bucket at the Goonyella Riverside Mine (central Queensland) was fatally injured when part of the bucket plate unexpectedly sprung up and struck him in the head.

Queensland Labor’s Mines Minister Dr Tony Lynham (59) has sat back while the state’s nine member Mining Safety and Health Advisory Committee has not convened for the past six months because it couldn’t find the PC perfect “gender representative” quota.   The safety committee’s chairman is Kate du Preez, the first woman to be appointed. Why?  Because she meets the credential of, well, being a woman.  She scored 100% in the psychometric test for womanhood, despite being an import from South Africa.  Why the global search?  Can’t we appoint local Aussies? 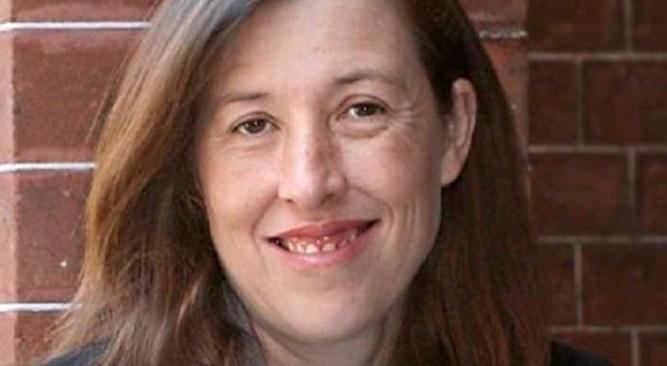 Kate du Preez has never driven a haul truck, but can make a good cuppa

Other members of the Mining Safety and Health Advisory Committee include Julie Devine and Katie Ormonde of Queensland Mines Inspectorate and Maryann Wipaki of Queensland Resources Council.  So aren’t four females out of nine good enough for the PC committee?   What is the ratio of men to women out in the central Queensland mining pits?  Typically a hundred to one if you’re lucky, and the 1% are in HR pushing the leftie virtual signalling agenda.

It seems that Central Queensland is short of brainless blondes, trannies and love pandas to comply with some PC perfect social representation.  Gender fluid Taswegians simply find it too hot up there.  Problem is that central Queensland mining is a bloke’s world, unsuited to city clicker chicky babes with NFI about mining.  Would the meetings have been cancelled if they could not find a male?

It is Trad-Palaszczuk Greens-Labor government policy to have gender equity on all government boards by 2020, especially mining, just because it sounds like a good idea from their Brisvegas public service high-rise.  Labor mining munster Dr Lynham (a dentist) has come out reckoning:  “You have to make sure gender representation is respected..because of the significance of the appointments, that has been difficult.”

Since the Trad-Pluckachuk feminazis won the 2015 Queensland election they have splurged on consultants like Deloitte thrusting leftist politicised agendas down the throats of the public and private sectors with gay abandon. 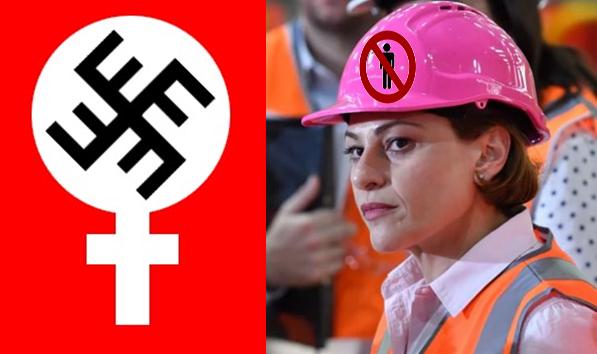 In this case it’s termed ‘Toward Gender Parity‘.  The compulory token chick on departmental and corporate boards is just the beginning toward totalitarian mediocracy.   Yet gender parity cannot be achieved given that the Trad Greens consider constructed gender so fluid these days as to be continually morphing.  Somehow gender is suddenly no longer just male and female like in the real natural world but LGBTTQQFAGPEDOBDSM+.  Unless a company board includes a one legged red head Mandarin-speaking Aboriginal tranny of the muslim faith, they will just not be PC representative of sicko society.  In the Greens cosmos deviant and perverted have become the new norm.

This is the crap being spun by Deloitte.  Checkout the mining sector on page 7.

So in Greens ruled Queensland if White men don’t commit to the diversity and inclusive cult, they will be sent on some White Privilege de-radicalisation course.  Queensland: beautiful one day, greater Brisvegas the next. Queenslanders have been Beattied, Blighed and now Tradded, forking out $8 million a day in interest on debt.

CFMEU mining and energy Queensland district president Stephen Smyth, who sits on the complicit safety committee, says “There’s a push for productivity at all costs … and no consistent approach to risk assessment.”

This is the crux of the problem.

It’s not just the mining fatalities across Queensland which are unacceptable in First World Australia.  While the fatalities attract media attention, there are many more serious workplace injuries, unreported near misses and chronic mine dust lung diseases that reflect the hazardous working conditions of the mining and quarrying industry.  The Queensland Mines and Quarries Safety Performance and Health Report 2016-2017 (extract below) reveals the extent of the problem. 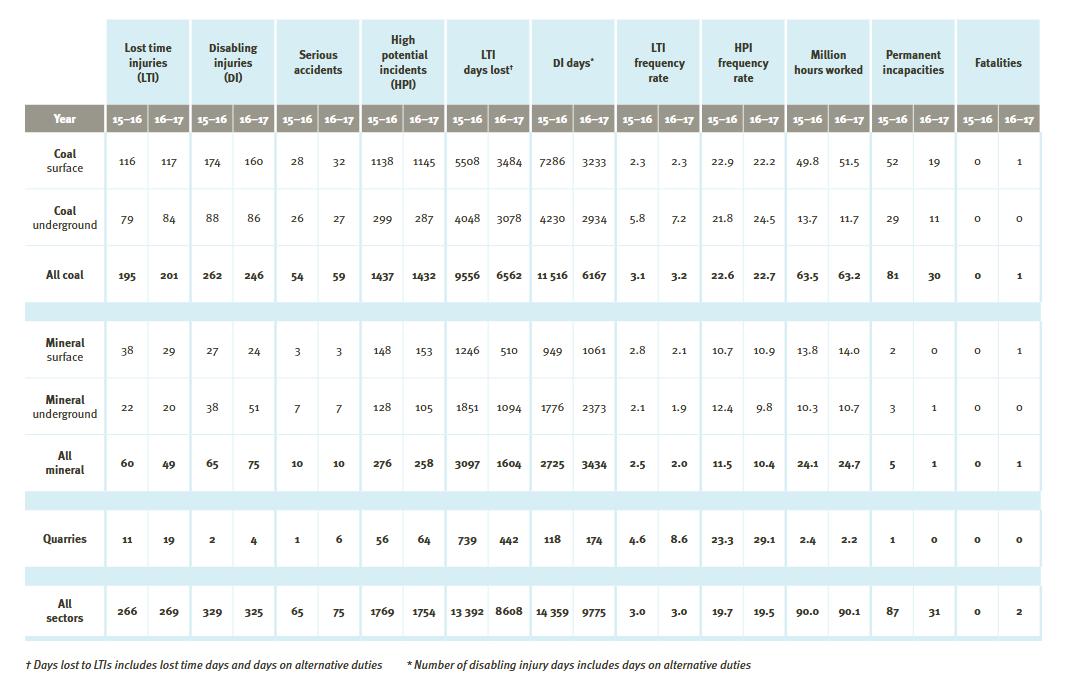 # Miners should refuse to work after death

Adding together the total sectors’ disabling injuries, the serious accidents and permanent incapacities (presuming they’re mutual exclusive) to the total fatalities, amounts to 700 incidents.  The mining and quarry toll is almost triple Queensland’s annual road toll which averages 246 over the past four years.

Queensland Resources Council is overseeing a killer industry, and Labor’s Mining Safety and Health Advisory Committee down in BrisVegas is shuffling the deck chairs on the titanic.

In a 2017 law suit case of Kerle v BM Alliance Coal Operations & Ors [2016] QSC 304 the Supreme Court of Queensland found the employers’ negligence caused the serious injuries sustained by a labour-hire worker involved in a single motor vehicle accident while driving home from work.  The employee had completed four consecutive 12-hour night shifts, and during his drive home collided with a bridge rail and hit a wall. Read More

24/7 mining is unnaturally dangerous, even if you’re female

American clinical psychologist and a board-certified sleep disorders specialist, Dr Andrew Tucker, is an expert in shift work fatigue, and has reported that fatigue-related risk is one of the biggest safety issues facing industries where shiftwork is a necessary component of operations.

“Industries (like mining) that operate around the clock require various types of shift schedules to maintain 24/7 operations. Work schedules involving long and irregular hours, night work or rotating shifts significantly affect the time available and opportunity for sleep. Around-the-clock operational demands in these industries challenge the body’s natural cycle of waking and sleep.”

“This particularly applies to personnel working in hazardous environments or performing safety critical tasks, such as commercial truck drivers or heavy vehicle operators in the road transport and mining industries… People don’t adapt to shiftwork, particularly evening work, night work and rotating shift schedules. Without the ability to objectively measure fatigue, it is almost impossible to effectively manage the associated risks.”

How much does the Trad-Pluckachuk Greens-Labor government extract from mining royalties to fund their Brisvegas indulgences?  Well in 2017-18, Queensland’s coal royalties alone reached a record breaking contribution of $3.8 billion to the Queensland state Budget, up from a previous record of $3.4 billion in 2016-17.