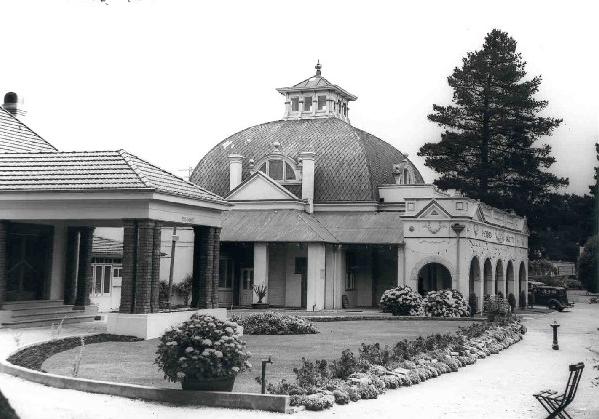 Reports are filtering in of a foreign owned and controlled luxury hotel group preferencing Third World hospitality scab labour on the pretence of ‘internship training‘ while shunning qualified local Australians.

A 14-month investigation by The Fair Work Commission and the Department of Home Affairs has revealed that foreign workers have been exploited at a luxury hotel chain known as The Escarpment Group. 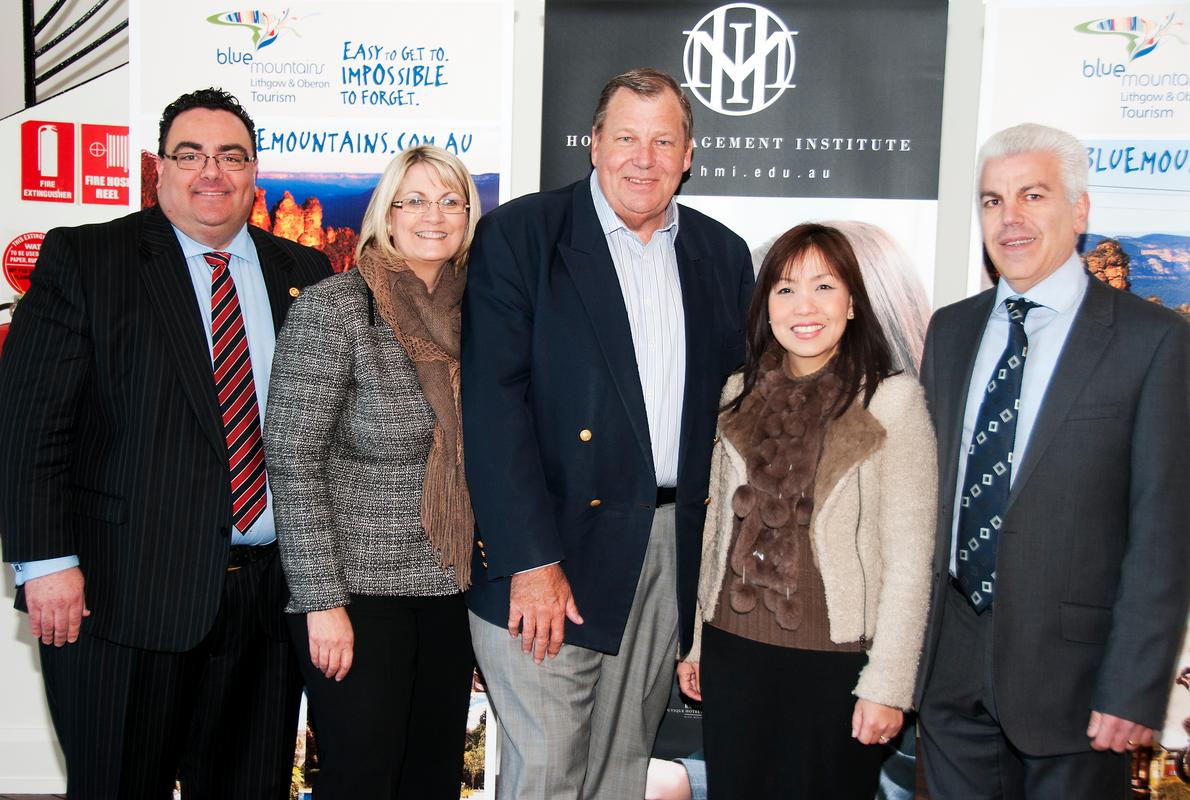 The hotel the pair own and control with iron fists include Peppers Convent Hotel at Pokolbin in the Hunter Valley and in the Blue Mountains – The Hydro Majestic Hotel Blue Mountains, Lilianfels Blue Mountains Resort and Spa, Echoes Boutique Hotel and Restaurant Blue Mountains, and Parklands Country Garden and Lodges. 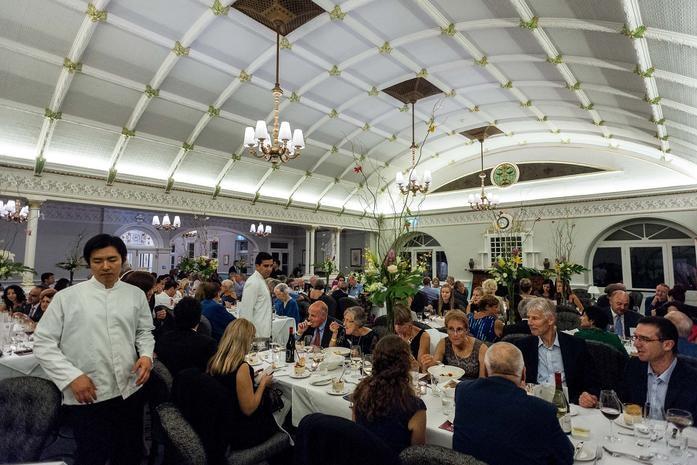 All properties are five star rated hotels yet only employ Third Worlders on a casual basis on what they call ‘internships’ – aka scabs on scab wages.  Aussie need not apply, so the company is basically racist anti-Australian.

All Escarpment Group board members and senior executives are ethnic imports on a good wicket. 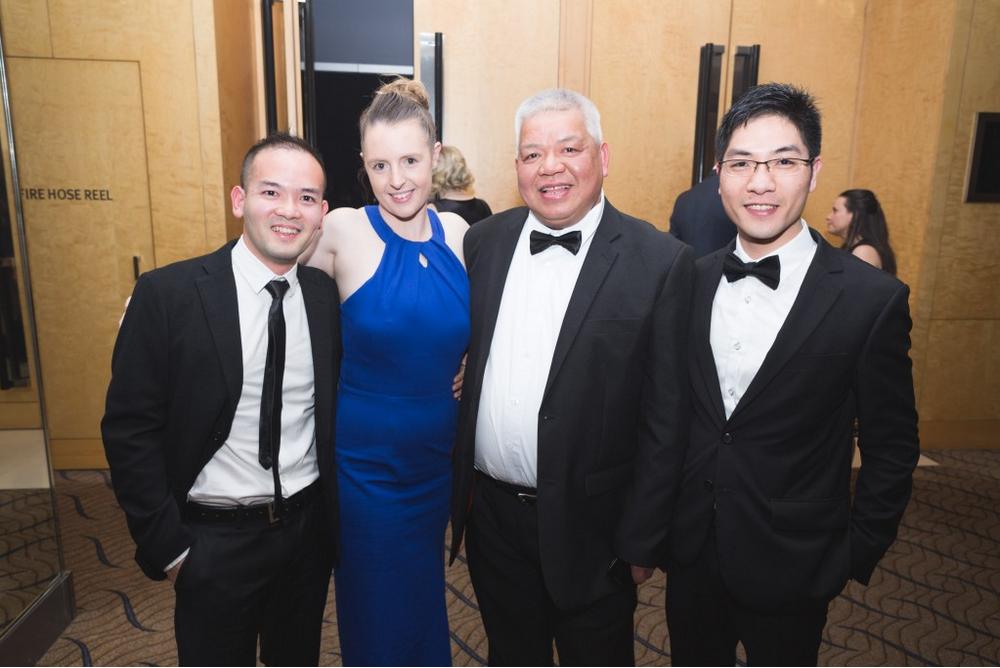 …except the one in blue

And it is widely acknowledged that elite Arab types look down upon Africans and Indian types (from India, Pakistan, Bangladesh, Sri Lanka).  Just stop over in the Middle East to find out.  Australian prisons are also full of ethnics who are all segregated from each other to prevent race-based murders in prison.

The Saad-Nguyen Dynasty in Aussie hospitality is heavily prejudiced toward their own wealth and to apartheid.  No Aussies are employed in senior executive positions.  No Disabled, Aborigines, Pacific Islanders, Africans, or Chinese are employed at all. It’s closed shop feudalism – Arab/Viet overlords supported by subcontinental serfs.

The Escarpment Group operation smells of foreign worker exploitation.  Clearly others involved are benefitting from government incentive largesse, starting with former Liberal Treasurer Joe Hockey’s leg up. It was interesting that Liberal Premier Mike Baird got invited to the premier opening of the Hydro Majesic on October 30 in 2014.

It is right royal aristocracy snuck in under the radar using not the notorious 457 subclass visas, but Canberra’s even more dodgy 407 fake Occupational Training Subclass Visa 407 which retails for a bargain $310.  It appears that TAFE’s Western Sydney Institute director education tourism & hospitality Anne Goonetilleke is in on the scheme along with Diana van Woerkom of Australian Internships.

No authority has been checking up since Liberal Treasurer Joe Hockey opened the renovated Hydro Majectic in January 2015.  The Escarpment Group has since churned cheap labour from Third World countries like India, the Philippines and Vietnam who come to Australia on the 407 Training Visa and are exploited through long hours of unpaid overtime and inflated rents.

The 407 visa is valid for up to two years and is subject to condition 8102 which forbids work apart from the training specified in the visa application.  So the employer has ’em by the short and curlies.  Upon graduation of the training, foreign workers typically apply then for Canberrans focus-group constructed ‘Skilled Independent Subclass Visa 189‘ – basically it’s a next step for 407 holders to progress to Australian residency and citizenship. It’s out of the Economic Growth by Mass Immigration agenda.

On arrival of the plane, foreign applicant interns get their passports taken, must sign a complicated and unconscionable deed of casual contract engagement surrendering all rights to Escarpment Group and accepting all responsibilites as Madame Mao dictates.   Look sideways and your visa is cancelled and you’re an instant illegal alien. 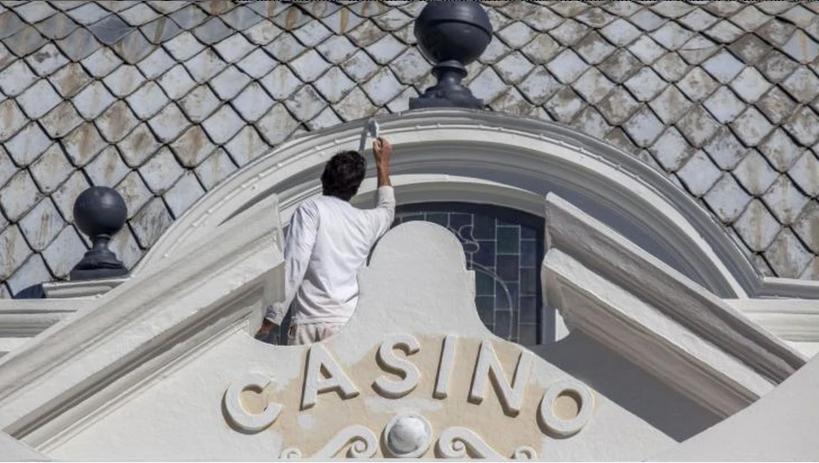 You had better be multi-skilled!

The workers say that official training requirements outlined by Australian Internships (AI) are not properly followed. “We have a training sheet, but we are so understaffed they cannot train us properly,” one intern says.

Investigative journalists have obtained originals of handwritten time sheets and rosters which show the internees have worked up to 50 hours each week.  But the Escarpment Group insist that a second set of time sheets are required to be signed to record only 38 hours of work per week. Any overtime is unpaid.

Despite occupational training promises, overlord owners the Saad-Nguyen Dynasty, exploited Mr Biswas as manager as an ‘internee’ with junior pay of just $26 per hour with no penalty rates, no overtime, no allowances.  His only benefits from Memsaab Saad were backpacker dorm style accommodation and leafover guest meals. 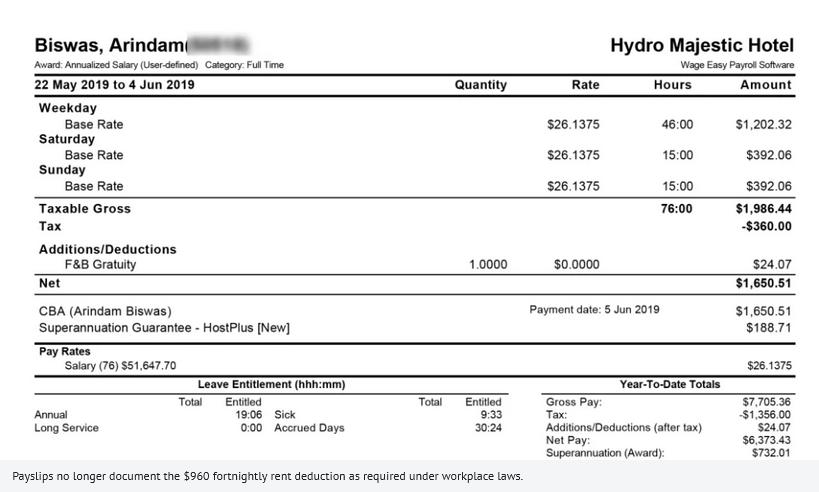 Why not employ a qualified and experienced Australian hotel manager? 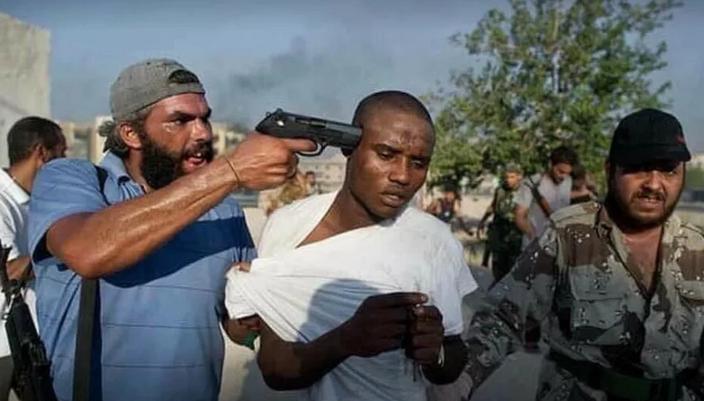 Investigative Aussie journalists have interviewed at least nine internees who have worked for the Escarpment Group of hotels since April 2018.  They have examined the pay slips and time sheets of seven who came to Australia from overseas on the promise of on-the-job training who felt like “prisoners”.

Foreign internees are too scared of reprisals to be identified, but one said: “For me, I am in a first world country working in Third World (conditions)”.

In First World Australia?  It’s only because Canberra keeps letting in Third World scum with Third World barbaric values and with no background checks.  Such is the presumption of aristocratic types that the scabs won’t know any different. 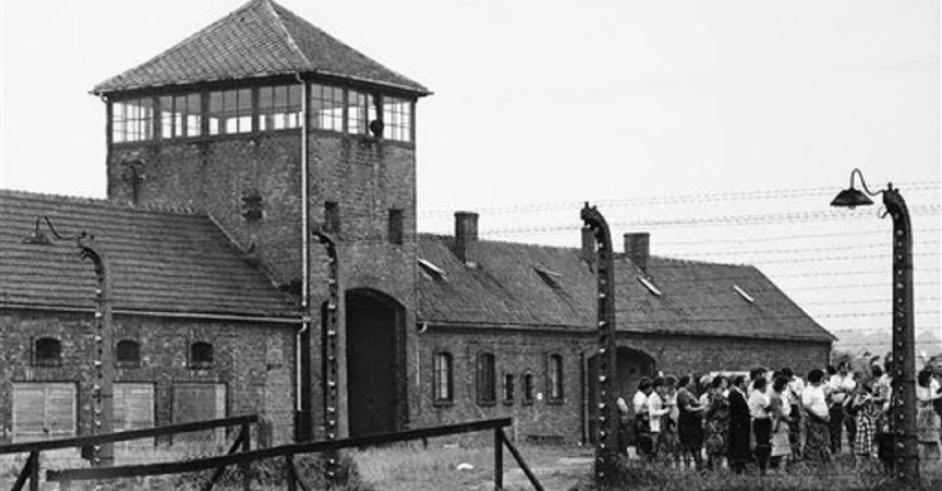 Hotel scab interns get deducted more than $6,600 for a 52-week internship and are forced to share a small bedroom that their employer rents to them.   Internee pay slips, as obtained by News Limited media, show records of the $960 fortnightly deduction until last year, but it does not appear on pay slips issued this year, as required under workplace laws.  The only evidence appears on employees’ bank statements.

At $480 a week, the shared room costs $60 more than the market rate for an entire house in the Blue Mountains. It’s also more than the $422 charge for a Saturday night stay at the Hydro Majestic in a heritage room with breakfast.

Every fortnight, Biswas watched as Madame Mao deposited $1,626 into his bank account, but like clockwork, more than half his fortnightly wages disappeared – reclaimed by his employer as rent for a shared bedroom.

This was his digs – wash your own sheets dude! 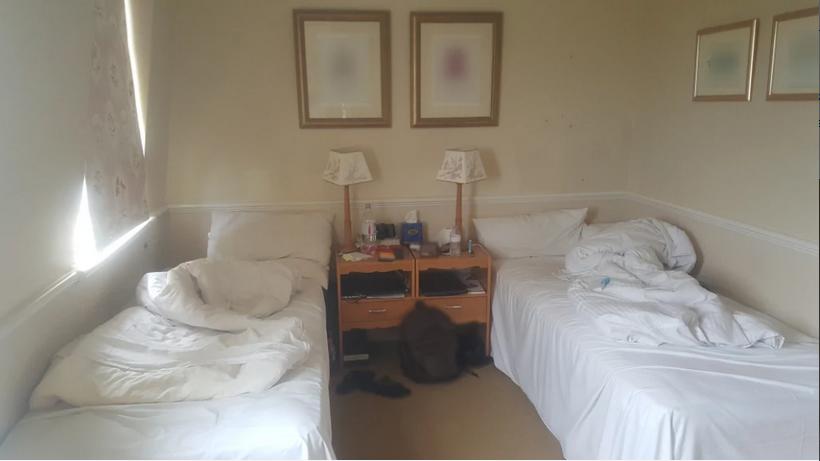 No dollar amount for rent or food was mentioned in Biswas’s internship contract or those of other foreign workers who showed them to investigative journalists during interviews on arrival in Katoomba in the Blue Mountains. The contract signed by the Escarpment Group and Australian Internships only says the “package includes full boarding – twin share accommodation with three meals daily”.

Other interns say they were working up to 11 hours of unpaid overtime each week, and being asked to sign false timesheets that showed they were working 38 hours a week instead of the 50 hours plus recorded in their handwritten time sheets and rosters.

Workers have also claimed that while money was deducted from their salary for three meals per day, many meals were not provided at all and until complaints were raised about the standard of meals late last year, they were usually served leftovers.

“There will be days I miss out on lunch or dinner. I would get about eight or nine [lunch and dinner] meals out of 14 each week,” one worker said.  “We never get the time to have breakfast because we have to take it from the buffet after the guests leave, but that is the same time we have to start work.” 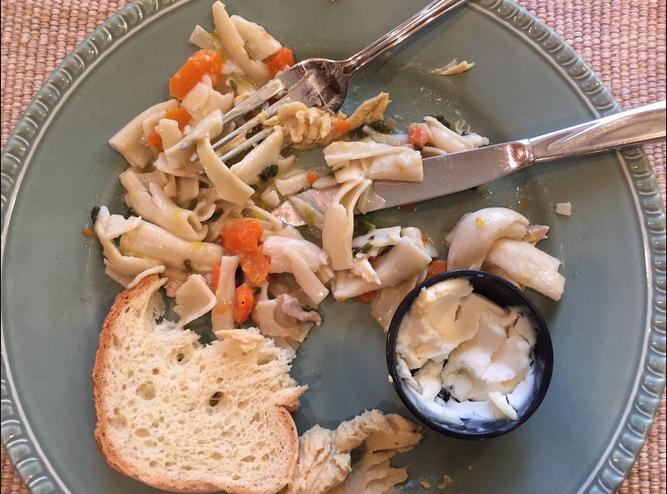 Australian Internships informed Biswas of the $480 food and accommodation charge in a separate email after he had paid for his visa application. Foreign workers who ask to move out of the accommodation say they are threatened with the termination of their contract and visa.

When Biswas told the hotel he was planning to resign, he was offered a single room for $250 a week without meals, to stay on. But the offer also meant his annual salary would be cut from $51,648 to $45,664.

And his rations downgraded… 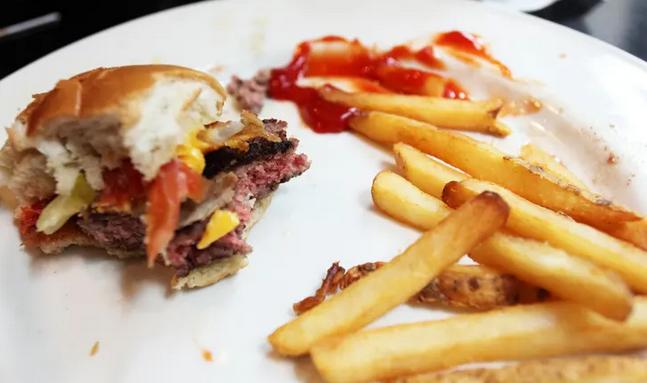 Two days before Biswas handed in his resignation on June 22, he complained to Australian Internships about exploitation under the guise of a “training” arrangement.  He was summarily sacked on June 25 and threatened that under the terms of the 407 visa, he has 60 days from June 25 to get another visa or to find another employer to sponsor him, or return to India.

Rental prices for a three-bedroom house in Katoomba range from about $390 to $450 per week.  But when Biswas questioned the rent charge, saying he would prefer to make his own arrangements, Australian Internships told him it was not optional: “You are not allowed to change accommodation, it is a package inside of your agreement.”  He was later asked to sign a separate form authorising the $480 deduction.   Others were told the charge was compulsory and warned they would have to terminate their contracts and visas if they moved out.

Other staff, who are Australian residents and not forced to live on site, said they themselves were paid properly at Lilianfels, but shared concerns their co-workers on visas were being exploited. “They are all too scared to say anything because they want the visa even if they are being underpaid or working too many hours,” one says.

The union that represents hospitality workers, United Voice, says the industry award requires that no more than $204.12 be deducted from their salary each week for a shared room and three meals a day (Not $960, Madame Mao!).  The union said the high dollar amount and compulsory nature of the accommodation provided by the Escarpment Group “warrants further investigation”. 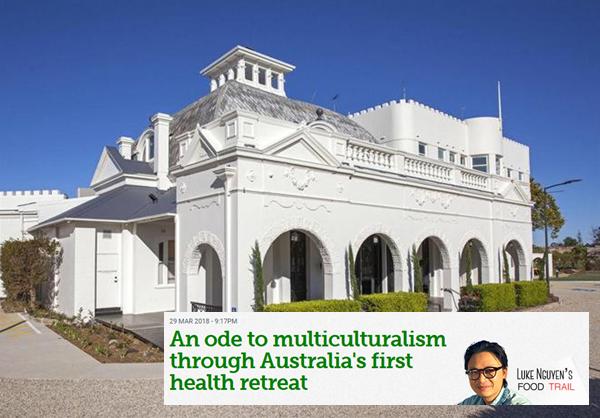 Employment lawyer Sharmilla Bargon from the Redfern Legal Centre says employers have a legal obligation to keep accurate time sheets and wage records. They are also required to provide pay slips that reflect the total number of hours worked. And any deductions from wages should “absolutely” be recorded.  “If an employer is found to have falsified work records, a court can order them to pay significant penalties of up to $63,000 for each contravention,” Bargon says.

Andrew Stewart, a professor of law at the University of Adelaide, said it was possible that a deduction for food and lodging could be reasonable, but it had to be for the employee’s benefit and at a reasonable cost. “If they are being forced to stay in particular accommodation, it throws up all kinds of red flags in terms of restrictions in the Fair Work Act,” he says.

Immigration law expert Joanna Howe, from the University of Adelaide, said there had been little scrutiny of the 407 Training Visa and some employers were using it to undercut the minimum wage through unpaid overtime and inflated deductions on accommodation and food.

“This particular arrangement appears to be using the word ‘internship’ completely fraudulently,” Howe says. “It is an employment package that is exploitative from the start. This undercuts jobs for locals because no local would work under those conditions.”

Professor Fels who led the Migrant Worker Taskforce urged the government to speedily implement its recommendations, which it accepted in March, in response to unchecked exploitation. His report to the government in February also noted the Fair Work Ombudsman (FWO) needed to have a stronger profile with migrant workers and a “stronger enforcement response”.