Mr. Nick Griffin, vice-president of the Alliance For Peace And Freedom, has been invited to speak at the first Australian Nationalist Forum event. 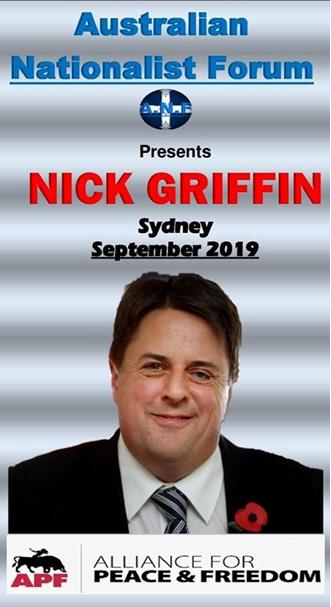 The Forum has been tentatively set for Sydney on September 21, 2019.

Mr. Griffin accepted the invitation, remarking of course, that the Australian government and certain ideologically motivated critics may object to his speaking in Australia.

The visa application will be made relatively soon.

In recent times, there has been considerable media and political attention devoted to a raft of so-called ‘Alt-Right’ and ‘conservative’ and ‘white nationalist’ speakers being invited to Australia and on some occasions actually being allowed entry into the country. From a nationalist perspective, none of these speakers was nationalist, nor particularly deserving of the attention of nationalists.

Dr. Jim Saleam, who corresponded with Nick Griffin last week, commented to us:

Mr.Griffin spoke via Skype to an Australia First Party forum on the broad significance of the Syrian war in December 2016 but now looks forward to actually seeing Australia and speaking personally with Australian nationalists and other patriotic people.

Nick Griffin has written and spoken at great length in recent years on questions as diverse as civic patriotism and the Muslim question, Ziopatriotism, the immigration invasion of Europe and the strategy and tactics of constructing real nationalist parties country by country. His work intersects directly with experiences shared by Australian nationalists with European nationalist parties and movements which establishes his great relevancy in the current discussions in Australia.

It will be a pleasure to hear and discourse with a man who brings clarity to these and other crucial questions.