“Well Mal just sell the message like in merchant banking.  The plebs will start listening if you talk ‘tough overhaul’.  By the way, Westfield HQ’s drip feeding Fairfax with fake news to knife dissenters like Abbott.”

It is the old game of the political class placating ‘pleb’ fears.

The Liberals (or Turnbull’s Coalition) demand tighter citizenship rules, more commitment to ‘values’ and more emphasis on ‘security’.  The Liberals do not commit to reducing immigration, let alone ending it. They maintain that immigration will continue ‘regardless of nationality’ in selection.  Most voters fall for the spin delivered in the shiny suit.

In Australian politics today, it is only the nationalists who demand the scrapping of immigration and a construction of a new population policy which defends the heritage of Australia as a European society.

You can keep living in your Arabic enclave in south-western Sydney speaking only Arabic, keep female slaves, continue sending all your kids to Punchbowl jihad indoctrinating school, attend mosques, else you’re as dinky di as they come, cobber!

Mal said in one of his in shiny suits yesterday:

“Australians have an enormous reservoir of good sense..we must ensure that our citizenship program is conducted in our national interest.”  As for the details… “A discussion paper is going to engage public discussion on this, followed by another enquiry.” 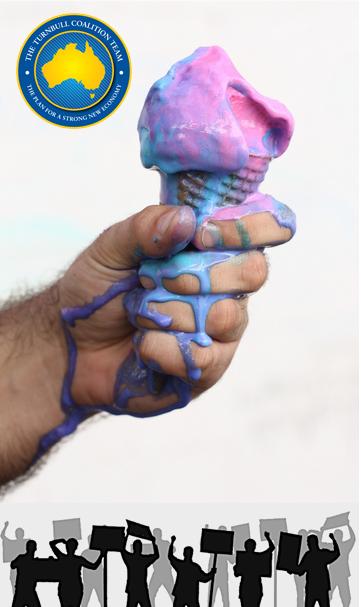