In the heady days of Chinese-inspired over-promising big Kevin Rudd, who had big plans for a bigger Australia to become more like China, got his right elbow man, Anthony Albanese to announce ‘supply-side‘ solutions to Australia’s chronic public infrastructure shortfalls.

But what Elbow ignored and presumed as gospel (coz big Kev didn’t liked being questioned) was and continues to be Green Labor’s flood gate immigration driving the big problem.

Overpopulation of our capital cities is Australia’s big problem – Australia’s #1 social problem and #1 public infrastructure problem.  Too many immigrants are putting excessive demands on urban infrastructure, beyond the States’ financial ability to cope – in bulging Sydney, Melbourne, Brisbane and Perth.

Net Overseas Migration into Australia in 2008–09 was around 285,000 which accounted for 65% of Australia’s population growth for that year.  Most of them settled in the capital cities, where most of the infrastructure bottlenecks are.  Previous and subsequent years have been similar.  The problem over decades has compounded to now diluting Australia’s urban living standards.

To the Big Rudd Labor Government, more immigration only meant “nation-building” and under the Green Gillard, nothing has changed.  Same agenda, different gender. It is idealistic fairyland stuff coming out of the out of touch Canberra loony farm and its focus group love-ins.  The witchcraft being spun out of the Gillard camp is luminescent from space.

Elbow’s Infrastructure Australia announcement has meant kowtowing to Labor’s unquestionned flood-gate immigration policy and exacerbating the disproportional demographic concentration of Australia’s population in the capital cities.  Elbow in his 2008 speech acknowledged that:

“Australia is one of the most urbanised countries in the world – with over 64% of the population living in our capital cities”, yet here he was encouraging the urban quagmire!

So Elbow threw pommy Rod Eddington into the inaugural chair to run Infrastructure Australia…to “build capacity on the supply side“.  Seriously, why couldn’t Elbow bloody well appoint an Australian?  Sir Rod’s probably here on one of those Aussie-sidelining 457 Visas.

Four years on and last week, Sir Rod, came out saying infrastructure progress was too slow because State Governments haven’t got the funds to partner with cash splashing borrowing Canberra.   Sir Rod says because the States can’t find $86 billion to fund his infrastructure project wish list, this is jeopardising Australia’s productivity potential.

What Elbow and Sir Rod ignore conveniently is that as every year Green Labor’s flood gate immigration department let’s 200,000 demand hungry immigrants in, the States are forced to accommodate them in their capital cities.  The foreign hoards don’t like cold isolated Canberra, so the pollies on Capitol Hill don’t have the flood on their doorstep.  The foreign hoards flock to Sydney, Melbourne, Brisbane and Perth, inflating demand for everything – jobs, housing, rents, schools, childcare, hospitals.  The roads are congested because of uncontrolled immigration demand.  State Government infrastructures can’t cope because its was not designed to cope with 200,000 new users a year!

Sir Rod’s gilded insular Infrastructure Australia may “ready to proceed“, but its like telling the States to ‘eat cake’.  It is a harbinger to a looming Labor wilderness.

To enforce the Elbow plan, Sir Rod is desperately suggesting the money be found for his projects by raiding Australians’ $1.2 trillion superannuation pool and by the States selling more public assets.

Green Gillard Labor will do anything to not only stay in power, but to perpetuate its idealism of short term economic growth at any cost to Australia’s quality of life.

In April 2012 this year Australia’s unemployed continued to number around 600,000.

NSW Treasurer Mike Baird has managed a $561 million contribution to fund desperately needed housing infrastructure, and funding for more nurses and police.  Sydney’s North-West Rail Link will get $3.3 billion over four years, while $1.5 billion has been committed to completing the Pacific Highway, but NSW simply doesn’t have $3.9 billion to match Sir Rod’s budget.   Some $30 million is to be set aside for a new Sydney motorway – one of the many on the plans but it will be matter of weighing up priorities.

To fund all this, Baird is to slash 10,000 public sector jobs losses over four years (do it on a last in first out basis – since most of NSW Labor’s more recent public servant recruits would have been migrants), cut $1.24 billion in existing government programmes and impose a desperate 12.5% increase in speeding fines.  He is also desperately looking to sell the public farm notably the State’s power generating assets.

The State just has no money to prop up Green Gillard Labor’s immigration invasion. 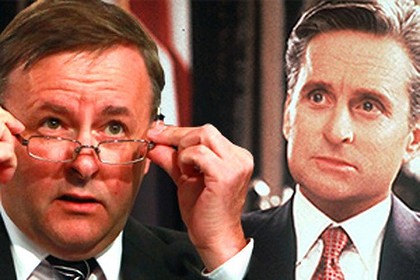 “We have serious problems to solve, and we need serious people to solve them”