Yet again it has taken journalists to do the core task of Australian Federal Police to uncover systemic corruption in Australia’s national security.

But Gillard’s girlfriend in crime, Nicola Roxon, who has got the plumb job of Australia’s Attorney General is the ultimately legal commander of the Australian Federal Police, but she’s clearly incompetent, asleep at the helm or probably both.  Haircut-wanting Nicola got the plumb Cabinet job only from Labor and Girl-Labor cronyism .  Nicola was a junior lawyer mate of Julia Gillard (now Prime Minister) in the 1990s during the much since infamous Slater and Gordon slush fund fraud.  Nicola is a crony installation from Julia’s Feminist Faction, which has been operating since Emily’s List was conceived back in 1994.

Now, a six-month joint investigation by Fairfax Media and the ABC’s 7.30 programme has uncovered a drug smuggling racket within Australian Customs and Border Protection Service, which has been exploiting security holes at Sydney’s T1 International Terminal since 2009 or even earlier.   Sydney Airport is owned by Macquarie Bank under its subsidiary MAp Airports.

In 2002, the Howard Liberal Government sold Sydney Airport to Macquarie Bank, to reap a cash injection illegitimtely from a public funded and owned infrastructure asset.

Such were Howard’s capitalist negotiable values.

Macquarie Bank has since traded/operated Sydney Airport on an absolute monopolistic control, true to Liberal factional form, and has since exploited that control by price gouging, cost cutting (recall the very public 2009 bikie brawl) and multiple dodgy quality controls.

Macquarie Capitalism – doughnut not the hole

– where corporate banking must never be belittled by notional ethics 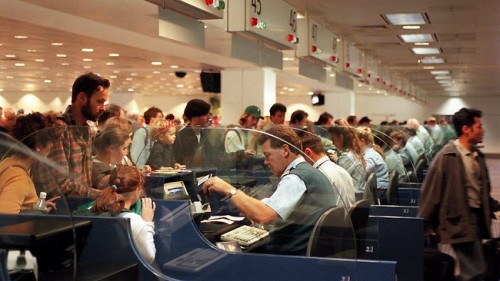 Recall back in March  2012 the story of Mick Gatto and his Melbourne associates in Sydney boasting of a $120 million real-estate acquistion of the Melbourne Sheraton hotel? A 5 star bikie den with additional services!

Do we have a Chicago 1920’s racket condoned by Australian Customs or what?

Sydney Airport Customs has deteriorated into a F-ethnic Smuggling Racket!

Australian Customs was aware of the corruption back in 2007, when leaked customs documents detailed multiple internal warnings that customs lacked the power, resources and ability to detect corruption and that its anti-corruption framework was “outdated and requires revision”.   Up until August 2012, career public servant Michael Carmody was highlighting multiple warnings signs that the organisation was badly exposed to corruption. He resigned.

Customs officer Diego Refojos, 24, recently pleaded guilty in the NSW District Court to serious drug offences connected to the Woolooware Raid. It is believed Refojos was linked to several earlier drug importations that have never been recovered by authorities.

This is what happens when we let the likes foreign ethnics like Diego Refojos in charge of our national border security.

Worse is that another import, Paul Adrian Lamella, also a customs officer, is also part of this smuggling racket.   New South Wales Police discovered him in a car with two other men in 2008 with five small bags stamped with Playboy bunny logos and filled with cocaine.  Lamella also later admitted using a small amount of cocaine.

Yet Customs let him keep his customs position and security clearance.  Unbelievable!

A property associate of Lamella, ethnic Joseph Harb, was arrested in August 2012 by Federal Police and charged with smuggling drugs through Sydney Airport.  The same month, ethnic customs officer, Paul Katralis, was arrested and charged by the Feds with drug trafficking and bribery.

Foreign criminals need to be deported.  Why is the Australian Government allowing foreign immigrants, convicted of serious crimes in Australia to remain in Australia, in our gaols or otherwise.  Deport ’em to whence they came!

But there are more involved and the investigations are now being handed by the Australian Commission for Law Enforcement Integrity and the Feds.  Customs officers with known strong links to drug traffickers, are still working for the agency.

What the Hell!  Who’s in charge Nicola Roxon? Customs and the Federal Police ultimately report to you.  You are ultimately accountable.

Why are there are still gaping holes in airport border security, despite multiple warnings from police and official inquiries, including the 2005 Wheeler report into security problems at Sydney Airport?     Two years later, in November 2007, a high-level internal Customs memo warned that customs’ internal affairs unit had ”insufficient case management resources and capability” and despite calls for anti-corruption reforms ”no action has been taken at this time”.

Further warning memos following in 2008 and 2009.  So by 2010, with no action taken, those concerned had just given up reporting, and so Sydney Airport Customs has become a multimillion dollar smuggling racket.

Clearly, corporate governance (probity, risk management, and internal audit) within the Custom Services and the Australian Federal Police is being flouted and is failing comprehensively.

But we are dealing with Australia’s National Security.  We can’t afford to have incompetent dimwits running our customs service and border protection.

Nicola Roxon and her Feds are twats on this one. Heads need to roll. 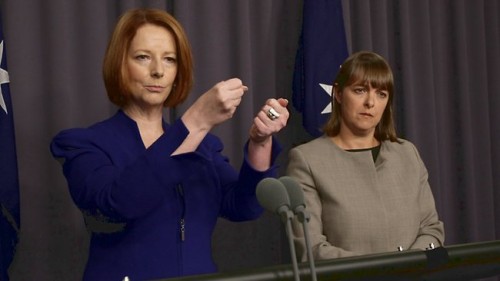 Team Emily
Jobs for the girls, cabability or otherwise

And why is Australian Customs employing foreign ethnics anyway?

Australian Federal Police and Australian Customs have both a record of incompetence and corruption.  Both organisations demand a thorough clean out to execute the vital tasks they must do and to regain the trust of Australians.

Recall the Feds refusal to investigate foreign bribery from the Philippines officials and its slackness in investigating the Reserve Bank Securency and Note Printing Australia corruption scandal.   Such failings have been referenced in a recent report by the Organisation for Economic Co-operation and Development stating:   “Australian businesses were highly exposed to foreign corruption, but prosecutors and federal police were under-resourced and investigators lacked experience in targeting corporate crime. Despite 28 cases reported to federal police since the introduction of laws in 1999, criminal charges had been laid over only one.”

In 2008, Muslim Immigration case officers posted in the Middle East were found to have been corruptly favouring pro-Muslim refugees to Australia.   Kevin Andrews MP had recommended replacing local employees accused of corruption and cronyism with Australian staff in 10 “sensitive” countries, including Jordan, Iran and Egypt.

Australian Customs still has a host of Islamic moles and infil-traitors in the Immigration department at home rubber stamping immigration for their Muslim cousins.

Former Curtin English Language Centre employee Keith Low was allegedly at the centre of an operation involving accepting bribes in exchange for altered test results.  The tests were then used to apply for Australian permanent residence or citizenship.

Perhaps the greatest ongoing breach to Australia’s National Security is the overwhelming number of Chinese arrivals by air into Australia.

The Chinese enter on valid student, tourist or carer’s visas and then apply for asylum.   They are aided and abetted by a network of corrupt agents in China and by corrupt Chinese migration agents based in mainly Sydney and Melbourne.

In 2011, more than 6,000 asylum seekers arrived by air, the largest group by far came from China.  The corrupt Chinese migration agents give the immigrants fake stories to learn (like being Falun Gong members) and false documents to sign.