Labor’s arrogant Gough Whitlam started it.  He opened up and exposed a secure prosperous Australia, the envy of the world, to the Slave Third World and its hordes of overbreeding eastern cultures.  It was probably because he’d personally grown tired of his wife’s Margaret’s ‘meat and three veg’ or Friday’s fish and chips.

Liberal’s Malcolm Fraser was of the same ideology and in flooded hundreds of thousands of Vietnamese, Southeast Asians, Chinese, Indians to reap Australia’s good life – that built by generations of Australians.

Hawke, Keating and Howard perpetuated the torrent and then Chinese-sympathetic Rudd went headstrong politburo, and threw away the immigration key to usher in his own arrogant ‘Big Australia‘.

All these prime ministers from Labor or Liberal factions of LibLab ideology, brought their personal agenda to Australian politics and unilaterally imposed their arrogant mantras upon the Australian people.  They got their diverse Asian cuisine, their wok stir fry and noodle benefit, but at what social cost?  They had no mandate to impose mass immigration upon Traditional Australians without referenda.

Economic demand has long been the short term, short sighted basis used by politicans to justify immigration.  Politicians have then retrospectively flagged the obvious street benefits of immigration as the diverse cuisine it has brought to a previously bland Australian palette.  The massive asian immigration policy by both Libs and Labs since Whitlam has been retrospectively justified by both LibLabs and Once-Were-Greens alike, borrowed from Australia’s previous post-War spagetti and olives immigrant experience.

Gillard and her Once-Were-Greens (now agents for illegals) cousins has just puppeted Rudd.  What happened to her trumped up Aug 2010 announcement of a Minister for Sustainable Population, post Rudd back-stabbing to distinguish herself from Rudd?  Tony Burke now has Sustainability, Environment, Water, Population and Communities – hardly a focus on preventing Rudd’s big Australia.

“Australia should not hurtle down the track towards a big population.” Gillard bleated after the Rudd stabbing.  Does the bitch ever do what she promises?

So the Labs excuse for keeping the Immigration Flood Gates open is supposedly to invite skilled migration, despite 600,000 Australians out of work and 25% Australian youth unemployment.   of course this policy is supported by the Libs with big corporate supporters like Urban Taskforce Australia and the jewish corporate Lowy Institute lobbying for cheap non-unionised labour to facilitate big corporate profits for their elitists.

And Sydney is copping the brunt of the immigration invasion making up 60% of its population growth.  The remaining 40% is made up of mainly immigrants breeding – the Slave Third Worlders who religiously want massive families.  Meanwhile, Sydney actually loses about 10,000 local residents a year to interstate destinations – these are the Traditional Australians fleeing the LibLabs F-ethnic Ghetto overrun.

Who wants to live next to Lebs?   Yet South West Sydney has become an Arabic enclave and successive LibLab state governments in New South Wales, selfishly chasing the F-ethnic Vote have let ’em build full-blown mosques at Auburn and Lakemba, and Muslim-only schools teaching Muslim values that contradict with Australian Western Values.

LibLabs turn a blind eye, and they wonder why the Cronulla Riots spontaneously erupted?  Enough is enough!

No wonder Traditional Australians have sold up the family home and felt forced to move to Queensland or even just up to the Central and North Coast in New South Wales to get out.  Who’d want to grow up with arrogant male Arabs taking over the streets?

Yesterday, there was yet another shooting murder in the suburban streets of South West Sydney.  A 28 year old Arab man was shot dead outside his home in the suburb of Punchbowl.  Bachir Arja died from being shot multiple times by two men (probably Arabs) as he walked through the front of his family’s Owen St home at 11.15pm on Tuesday.  He died at the scene.

Not a week goes past without the Sydney media reporting gun violence in South West Sydney.  Arab gangs have created a culture of fear across South West Sydney.   It’s become Sydney’s Wild West and like Chicago’s prohibition mobster gangland of the 1920s.

Police have set up a special taskforce to investigate the weekly shootings, but they are out-numbered and the laws are piss weak.  For Sydney police to have set up a Middle Eastern Crime Squad only confirms the Middle Eastern immigration is so problematic that  all Arabs must be prohibited entry into Australia.

The Feds need to go in and clean the place up and deport ’em.

Australia does not need Arabs. Arabs need Australia. So Mohammeds, sort yourselves out!

The answers must be national.

It is time the Immigration policy of the LibLab lot in Canberra take ownership for the social destruction they have unleashed upon urban Australia.  The answer is Federal Police control with escalated powers of search, arrest and incarceration.  The answer is a complete Immigration Moratorium, auto-deportation, outlawing bikie gangs with any member convicted with any gun violent crime, auto-deportation of all prisoners non-Australian born back to their country of origin, a national crack down on gun supply and importation, and Federal Police background checks on all owners of guns.

Local suburban police are not set up to deal with immigrant F’ethnic Violence on this scale.  Arab Immigration into Australia has got to be stopped immediately. We are importing thugs and then breeding some. 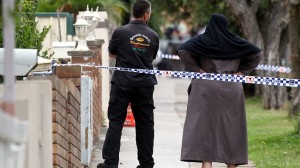 Not a good look in an Australian street

Shootings, extortions, gun violence is so out of control in South West Sydney that residents and children are seeking medical help for post-traumatic stress disorders.

Gangs from opposing religious sects are also extorting money from restaurants in the area with at least three premises fire-bombed or shot at in the past few weeks.

LibLab politicians come out to the south-west, even the local members, eat a bit of hummus and tabouli and then leave without addressing the problems.”  But Australia does not need hummus and tabouli that much.  If we wish, Australians can make their own.

The Lib Premier of New South Wales, Barry O’Farrell is doing nothing. 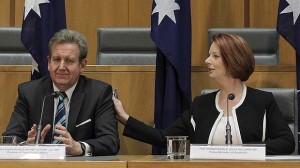