The ANZ Bank has become the most blatantly greedy and selfish bank in Australia.

It is the slowest to pass on Reserve Bank interest rate cuts on home loans.  It sacks a thousand banking jobs.  It’s bosses give themselves the biggest pay rises.

In February 2012 this year, the ANZ Bank announced cutting around 1,000 permanent jobs in the next four months to boost its profits.

After spending 18 months and $15 million on a corporate image rebranding campaign to be focused more on people, it came out calling itself the ‘people-shaped bank’,  then sacked 1000 of its people. 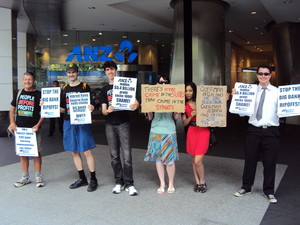 ANZ claims “we’re a bank that is shaped by our customers. We understand their needs. And we prove it in what we say, and the experiences and solutions we offer.”

But when the Reserve Bank of Australia on October 2 lowered interest rates by 25 basis points, the ANZ failed to pass on full rate cut.   Research by the Australia Institute has shown that banks boost profits by $460 million a year  ($1.3 million a day) simply by holding back some of the cut.  JPMorgan analyst Scott Manning calculates a higher profit figure more like $2 million a day. 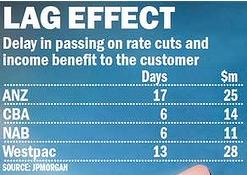 The ANZ now completely ignore rates cuts, instead unilaterally deciding on any cuts on the second Friday of each month.

Mr Manning calculates ANZ is likely to generate $25 million in additional earnings while it delays passing on rate cuts. 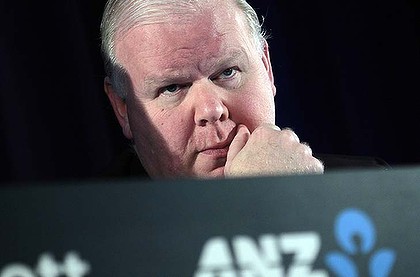 And so the rich get filthy richer and the poor get poorer and filthy, literally.

Uncontrolled free for all capitalism has corroded Australia’s once proud classless society, dividing it’s people into a minute number of corporate aristocratic billionnaires and growing underclass of havenots.

Australia should not be blindling following vicious American capitalism.

Ordinary Australians can resist and act.

Tell ANZ where to stick it!