Australia’s nation-wide government unemployment agency, Centrelink, has been found out telling Australian single mothers in need to go to charities for help.

The Gillard Labor Government has decided to stop its child support payments to single mothers.  It is all so that Wayne Swan, who modestly thinks of himself as the ‘world’s greatest treasurer’, can deliver his token budget surplus next year.   The Government’s support for single mothers is due to be withdrawn just after Christmas on January 1, 2013.  Nice.

With such despicable heartless treatment toward single mothers, who is the true misogynist?   How can Gillard have family values when she doesn’t live them?

Labor values have seen new laws passed by the Gillard Labor Government that cast single parents to join the dole queues as soon as their youngest child turns eight years of age.  The laws mean that single parents will lose up to $223 a fortnight in government support.

Welfare organisations have reported that they have received many reports of single mothers being told they should go to charities such as St Vincent de Paul and the Salvation Army if they find it too hard over January.  Single mothers have been telling Centrelink they will default on their rent and mortgages and will not be able to pay bills or afford groceries.  It will force many single parent families across Australia, who are already struggling with the cost of living, to the breadline and to homelessness.

It all so that the Gillard Labor Government can save $728 million over four years.

And it comes on the back of the Gillard’s world tripping where she has been out of control writing cheques in the millions to fund favours to foreigners.

In August, the Gillard was treated like royalty at the Pacific Islands Forum in the Cook Islands as she wrote a cheque for $320 million to ’empower’ Pacific islands women and to encourage gender equality.  Sounds good, but where was the mandate to divert Australian taxpayers money away from Australian single mothers?  Robbing poor single mothers of child allowance will hardly empower them. 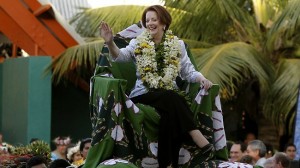 Last week, the Gillard tripped up to Cambodia to attend the East Asia Summit and cheque book at the ready, the Gillard happily wrote out an Australian taxpayer cheque for $50 million to Cambodia’s corrupt regime supposedly to combat people trafficking and fight malaria. 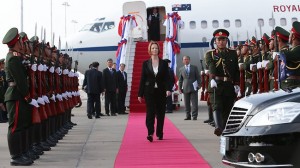 Last May, the Gillard signed an agreement with Afghanistan’s infamously corrupt President Karzai and his family dictatorship to commit Australia’s aid to Afghanistan by $85 million a year and then to $250 million by 2015.   And this all on top of the Gillard’s already $300 million in Australian taxpayer support for Afghanistan’s security forces, not forgetting Australian blood.

Let us not forget Gillard Labor’s massive gifting of $1 billion to Afghanistan over the next four years announced by Foreign Minister Bob Carr last July.  Let us not forget the $500 million Gillard gifted to Indonesia in November 2010 so it could build 2000 Muslim schools.

So add all the foreign cheque writing by absentee Gillard and wonder why Foreign Labor’s priorities are with foreigners and not with Australia’s most vulnerable at home.  But then the Gillard is used to slush funds.

It’s Australian taxpayers money damn it and Australians are seeing more and more of their hard earned money squandered to foreigners and to failed Labor projects.  Labor’s failed policy on illegal boat arrivals has seen a $5 billion blowout in processing illegal queue jumpers since Labor was elected in 2007.

Charity begins at home, unless you’re a foreigner like this duchess from Wales who became the douchebag from Lalor.  When the Gillard is finally ousted by Australians the only place she may find salvation is overseas.  No doubt she has realised this and is already sowing her career seeds in foreign lands at Australian taxpayer expense.

The Gillard is our worst prime minister ever. She is a traitor to our nation.