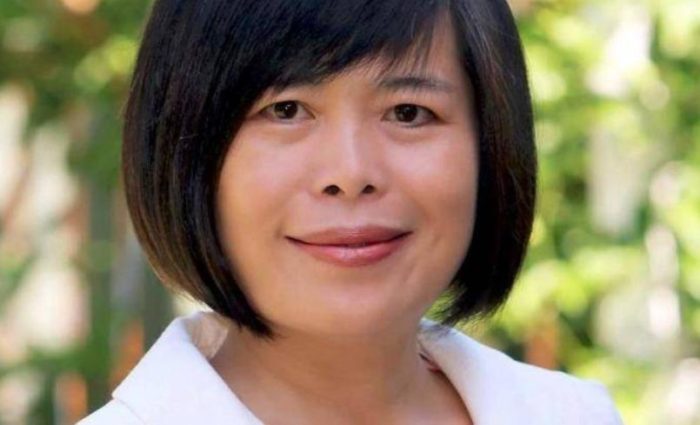 Back in 1996, then newly elected Pauline Hanson in her maiden speech, rightly declared “I believe we are in danger of being swamped by Asians“, now she’s recruiting them as PHONY candidates!

Thanks to the mass immigration polices of Labor and the Liberals, Australia was indeed, and has continued to be swamped by Asians, as well as by Arabs, Africans, islamics and a kaleidoscope of Third World welfare seekers – bringing with them their baggage of barbarism, violence and burden.

Twenty years hence, Pauline Hanson returns to politics and hello and behold recruits Ms Shan Ju Lin as one of her candidates for the Queensland election in 2018. Shan Ju Lin is a Taiwanese Falun Gong immigrant who hates the chinese communists.  But Pauline just wants to win the seat of Bundamba around Ipswich, so anything from the swamp will do – think quantity-not-quality.

But the seat is 80% Aussie and 90% speak only English.  There are a few Asians here and there around Ipswich, but Pauline chose Shan Ju Lin to represent them anyway, by distinguishing Shan as a good Asian from otherwise bad Asians.  Pauline is casting aside her drag-netting of the swamp to more selective spinnerbaiting to lure the right gullible voters.

Hypocrisy is Hansonism – as fickle as the wind.

Shan Ju Lin joined Pauline on December 24, 2016 with no background checks.  Within three weeks she got dumped by Pauline for a Facebook critique against deviants accused of raping adopted children.   Pauline’s puppet master, James Ashby, a Liberal Party plant in the Hanson camp and notorious for the 2013 Ashbygate scandal involving deviant sex, took offence and so sacked Lin.

Pauline in 2013 had stated “The fact is I don’t agree with gay marriages, or gays adopting children or [having] in vitro fertilisation.”

More Hanson hypocrisy.  Is Pauline for or against deviants getting married and adopting kids to do with what they will?  Pauline needs to come clean on deviance.

Ms Lin has responded saying the party’s decision had caught her by surprise.

“One Nation has no policy to be adhered to on this issue except for that of a referendum on gay marriage whereby the community would have its say. The speed of the disendorsement decision – without any chance to defend myself – has also been remarkable. At no time have I been able to speak directly with Pauline Hanson and therefore I have not had the ability to check what has been related to her about the matter.  All candidates are only able to contact her via her chief of staff, Mr James Ashby, who then replies back on her behalf.”

Sound familiar to members in WA?  Not much by way of harmony.  Pauline seems to have come out of the closet under duress from her new Chief of Whatever.

Despite her rejection by the party, Ms Lin said she would remain a committed supporter.

But it seems Ashby might be on to an electoral winner in Ipswich, since the place has recently descended into a hotpot of deviance with reports of “gay sex park romps in broad daylight on rise” centred around Denmark Hill.

Last November 16 in the Queensland Times, Ipswich Mayor Paul Pisasale insisted gay male sex practitioners in the Pan Pacific Peace Gardens in Redbank Park will be caught with their pants down after asking for extra police patrols.

“You will be caught with your pants down”, is the firm warning from Ipswich Mayor Paul Pisasale to gay male sex rompers in the Pan Pacific Peace Gardens in Redbank after he asked police to step up patrols of the notorious hotbed of male sex and seduction.

The prime times for the liaisons are around 7.30 in the morning, lunch time and the late afternoons.

Cr Pisasale has been inundated with reports about more than heavy breathing in the bushes and toilets at the lovers’ lair, while the QT also received a letter from a resident outlining their dismay at the sexual gymnastics taking place.

Cr Pisasale said there was a place for ‘naughty bits’ in life, but added that was definitely in the home and not in the great Ipswich outdoors.

He said reports of lust in the dust were now more than hot gossip and listed the park at Denmark Hill as another playground of pleasure.

“Catching them with their pants down is the hard part,” the police source said.

But Cr Pisasale said that was about to change and made no apologies for his hard line stance.

“If they keep this up I can assure them the police will catch them with their pants down,” Cr Pisasale said.

“Males and females don’t go into our parks for these activities so I don’t want males and males going in there either.

“I have asked police to step up patrols because the general public deserves the right to take their families to parks in peace.

“Enough is enough. Please, this is your last warning. Keep this out of our parks. Keep it at home.

“People are ringing me and saying they don’t care about people’s sexuality but they do care about going to Pan Pacific Peace Gardens and Denmark Hill and not seeing these acts in public. 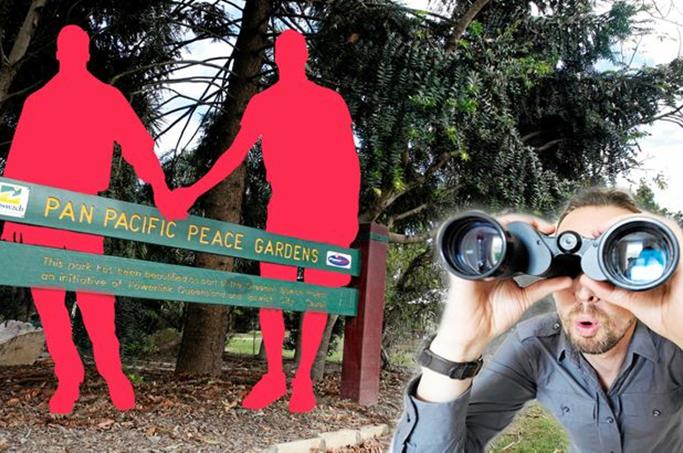 “This is a small percentage, but they spoil it for everybody. We’ve got beautiful parks and recreation areas and there is not a better mayor than me for looking after multiculturalism, religious groups and different nationalities. I don’t care about your sexuality but keep it to yourself.”
Information about the Redbank park is available on internet hookup sites with ‘Cruising Gays’ boasting it has “very secluded spots”.

The Goodna toilet block in McAuliffe St is a lure for “tradies, truckers, younger and older types”.

The Pan Pacific Peace Gardens hit the headlines in 2011 for being ‘sex central’.

Those caught having sex in parks could face criminal charges and up to two years in prison.

Division 2 Councillor Paul Tully, who represents Redbank, said he had taken action to protect the community from “unacceptable activities” and put a stop to the conduct at the park.

“We’ve closed off one of the entrances up near the Shell service station. That’s been locked off,” Cr Tully said.

“People used to go up there in what is a fairly secluded area. There is a lot of vegetation in that park and it is easy for people to go in there and hide themselves away.”

Ashby is clearly in his demographic element.  Pauline Hanson’s One Nation is actively scouting for LGBTI deviants in and around Ipswich to be candidates so as to tap into the growing demographic.

…can’t wait for the sequel.