Ordinary Australians like Chris Shortis have had a gutful of being told to be tolerant of foreign Islamics and alien Muslim groups arriving in Australia – those from the troubled Third World and foreign civil wars who are incompatible with our Australian European-ethnic identity and its values and standards.

Those who flout the laws of our land, who form their cultural ghettos, demand barbaric Sharia law, take over our neighbourhoods, commit heinous crimes, setup organised crime gangs and who inflict terrorism on our communities – clearly do not belong here.

Why should decent Australians be tolerant of unwelcomed imported barbarism and an extreme cult?

Islam is increasingly being practiced no longer as a religion but a barbaric ideology. Believers are intolerant and irrational – they practice, evangelise and spread literal Quran dogma as unquestionable totalitarian instruction.  That’s why the Left like it (the ‘totalitarianism’ bit).  Islam comes from the ancient desert badlands in the Arabic Middle East.  It prescribes intolerance, and so – two millennia of internecine hate.

Islam and Muslims are anti-Christian, and are in an anti-Australian mode.   Who needs imported problems imposed on their country along with the massive damage and cost baggage they inflict and their slave-based disrespect toward women? 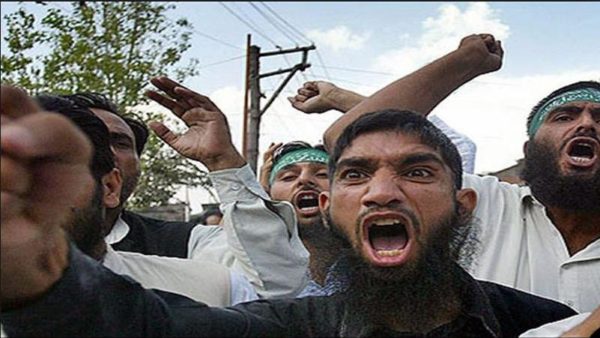 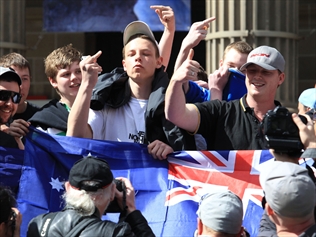 Australia First Party wants ‘daslumics‘ (new Macquarie Dictionary word for 2016) all rounded up, deported back to from whence they came and their ugly mosques bulldozed yesterday – ‘a demolition-led recovery‘!

Who invited them in?  Treacherous governments back to the time of Malcolm Fraser – the same ones who fleeced Australia’s wealth, burdening our children with an unpayable structural government debt of $250 billion (and on track to be doubled by the Libs). And ironically,and in contradiction to the ideas (sic) of the arrivals, those who rant on about deviant marriage and adoption rights, the legalisation of narcotics and who side with criminals for light sentences.

Following the Islamic attack on Sydney’s Lindt Café in late 2014, various Islamist threats of public beheading on ANZAC Day and the cold-blooded murder outside the front of the NSW Police Headquarters in Parramatta; many Aussies have taken to the streets in ongoing protests against the Islamic violence and defending Australian rights and liberties. 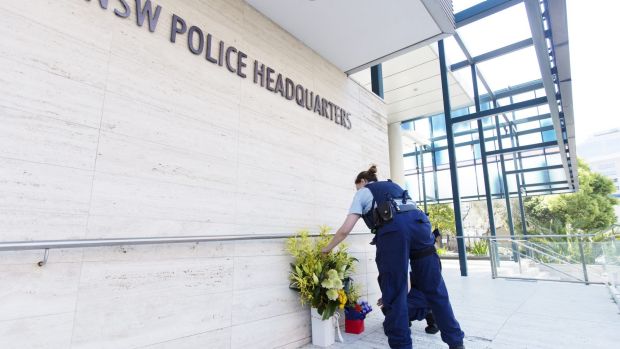 So-called ‘moderate muslims’ are those intimidated into silence by the rabid muslims – so same diff!

There are more than half a million Muslims now in Australia and 340 mosques and Islamic prayer halls (wedge mosques).  They are unwelcome incursions invading our Christian Australian society.

On Sunday, October 4, 2015 members of the United Patriot Front (UPF) protested against a planned mosque.  A few dozen fly-in muzzies got the multiculti backing of the Left-leaning Bendigo Council.  In protest, UPF staged a mock beheading (a stunt) using an old second-hand mannequin in front of the council chambers, videoing it and posting the video on Facebook.  They used a red water-based food dye to represent blood. The council chambers were closed at the time, being early on a Sunday morning. 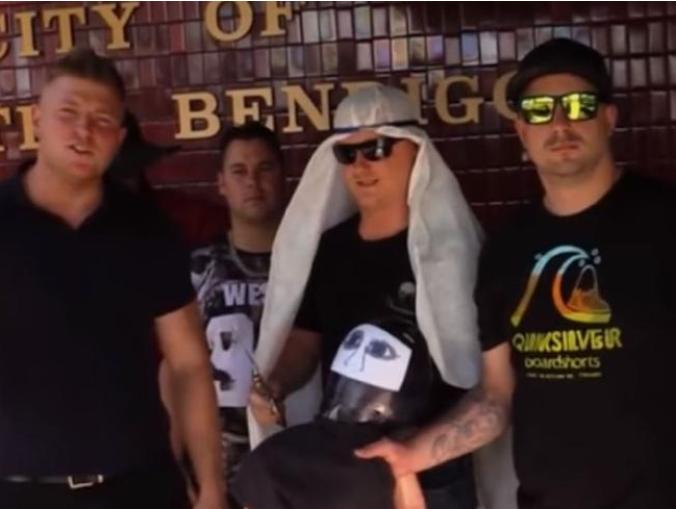 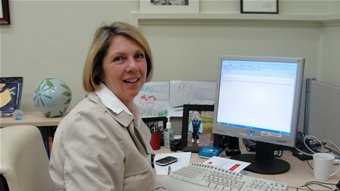 Catherine King MP at her blog, when becalmed

“The Bendigo Three’ as they have become known, have been trumped-up charged with:

The charges have been cooked up by the Labor Party, probably in cahoots with select Labor councillors on the Bendigo council and a local Labor lawyer sipping chai lattes around the corner at the CFMEU’s hangout in View Street.

It is all a juvenile attempt to try to silence legitimate democratic protest. Won’t work Cathy!

The Racial and Religious Tolerance Act since 2002 is a Labor totalitarian law imposed by then Premier Steve Bracks to enforce ethnic tolerance upon Australians, while at the same time seeking to empower ethnic minorities with higher rights than the Australian majority in their own country.  (More liberal-globalist totalitarianism to enforce the ‘silent majority‘). 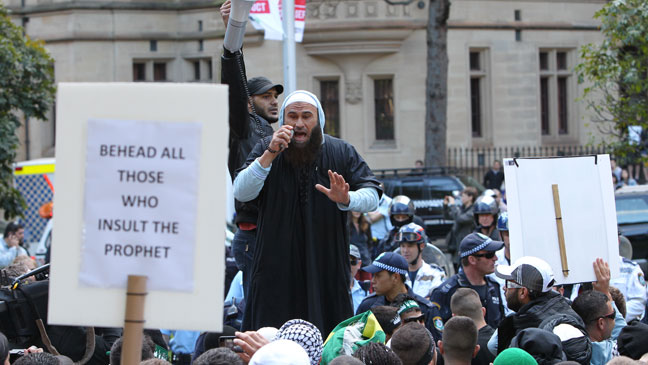 Human Rights laws in Australia encourage minorities to get away with inciting hatred against Australians, but not vice versa

Euphemistically labeled ‘human rights commissions’ in Australia are in reality, treacherously prejudicial against Australians.  Such political treachery needs to be abolished as a form of legal apartheid.

The charges are a stitch up with no substance by a vindictive totalitarian thug hell-bent on intimidating any Australians who dare oppose her extreme support for Islam, mosques and imposed multiculturalism from the Third World.  Catherine King thinks Islamics have more rights than Australian right to free speech.  She is an unAustralian traitor.

The mannequin used in the theatrical street protest was removed and the red food dye got quickly cleaned up.  No mess remains on the footpath where the protest took place.  Yet real blood stains from Curtis Cheng remain outside the police headquarters in Parramatta.  Yet Catherine King turns a blind eye to such Islamism in our midst.  This thug would rather attack Australian patriots defending their way of life in their own country.

One of the UPF protesters, Chris Shortis, now a member of Australia First Party, is one of The Bendigo Three up on these politically motivated charges. 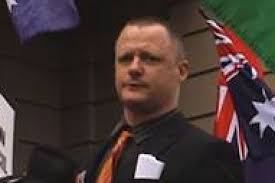 It is obvious that Chris Shortis (45) is being targeted because of his nationalist opinions and that directions for this ‘operation’ come from the political sections of the Victoria Police. Along with Chris, Neil Erikson (31) and Blair Cottrell (34) are being charged with the same bogus “offences”.

Their rather creative and artful protest in Bendigo follows a series of public rallies held in Bendigo against the building of the proposed mosque, which at times have seen violent male anarchists turn up in Black Bloc hoodies causing affray and damaging property. 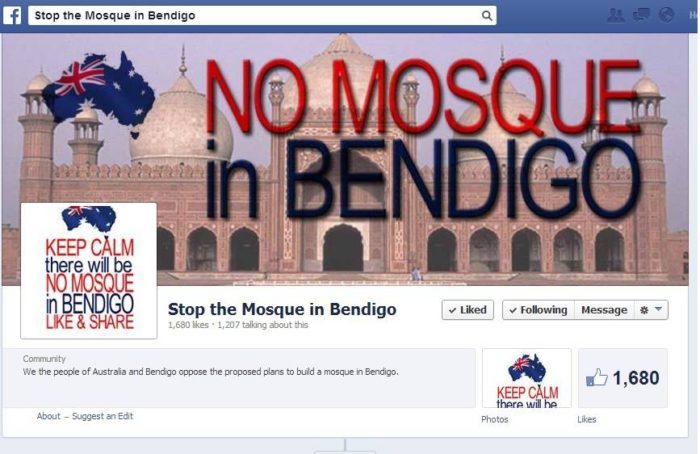 “I AM CHRIS SHORTIS” – THIS IS THE FREE SPEECH CRY

“The Australian newspaper, for reasons of its own, has long opposed the “hurt feelings” provisions of the Commonwealth racial vilification legislation. Today, it made reference to a vilification complaint recently made against one of its cartoonists, Bill Leak – and took up the slogan “I am Bill Leak”.

The Australian newspaper says it wants the notorious Section 18C of the Racial Discrimination Act repealed.

Fair enough, as far as that goes.

However, one of the most serious prosecutions ever attempted passes in silence. We refer to three men who were in Bendigo a year ago protesting the construction of a large mosque in that city, a decision of Council which has infuriated local residents and which has inspired the usual ‘anti racists’ and multiculturalists to action.

In this case, the men are charged with performing a mock ‘beheading’ of a dummy. They were calling attention to the practises of Sharia Law in Islam and its political jihadist form, so graphically represented by al Qaeda and ISIS. And indeed, just last week two boys in Sydney were charged with preparations to commit a terrorist act, a beheading in fact!

From simply being accused people, the three men are in our eyes now – ‘The Bendigo Three’.

The case of the Bendigo Three is not a matter of a cartoon giving a sarcastic opinion and general free speech. It is a prosecution launched under Victoria’s Racial And Religious Tolerance Act.

Because of the intervention of the Director of Public Prosecutions and the sly underhanded investigation by certain officers in Victoria Police, it was clear from the start that an otherwise political prosecution is to be pushed with energy and possibly venom. Essentially, the state aims to punish the accused for a thought crime, intimidate others and set a precedent to curtail liberty.

Well may the Australian say “I am Bill Leak” because we say that every Australian concerned about political freedom of expression should say: “I am Chris Shortis”.

The political charges against Chris and his fellow protester threaten to create a dangerous precedent against free speech and the right to public protest in Australia.  The charges are politically motivated by the Labor Party.

Chris and his fellow patriots are Ordinary Australians who deserve a fair go.

Please watch Chris Shortis’ video.  Donate if you can! 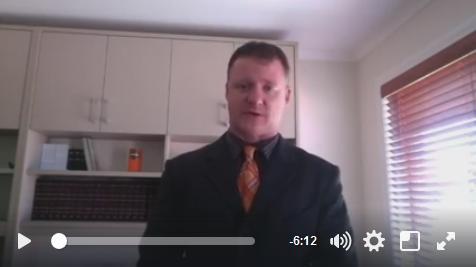 Play Chris’s public video by clicking on the image above which links our Facebook page.

Unlike the deep slush funds of the unionist Labor Party, Chris and his fellow patriots are not rich nor do they have access to expensive lawyers.

So Chris is asking for support and for donations to support his legal defence.  This case affects all of us and must be fought against and Chris says any contributions will be warmly appreciated.