How can Liberal Party approval for a massive open cut coal mine in the verdant Liverpool Plains, be anything but corrupt?  Both the Abbott and Baird Liberal governments have done just that.

That they are prepared to destroy Australian agriculture in the centre of NSW’s most productive farmland in the Liverpool Plains to reap mining royalties from the Chinese Government is morally reprehensible. 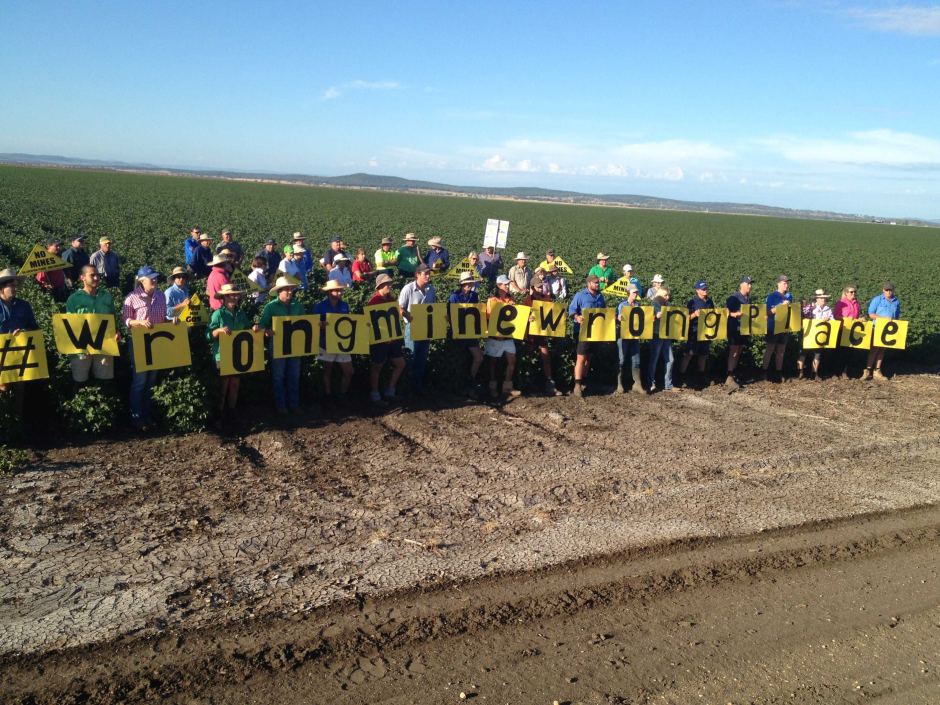 Australia’s premier food bowl for Australians and our future – not for mining!

Liberal and Labor care not for our agricultural assets. It is all about mining royalties, and the Liberals will betray ordinary Australians just as equally as does the Labor Party when in government.

In October 2008, Shenhua paid the former NSW Labor Government $300 million for the mining exploration license, approved by the then Minister for Mineral and Forest Resources Ian MacDonald and the Premier, Nathan Rees.  The nearby Caroona Coal license was granted to BHP Billiton for $123 million in 2006 under Labor Premier Morris Iemma.

The exploration license was renewed in January 2012 by the NSW Liberal Government under Premier Barry O’Farrell, guaranteeing the company another 5 years to explore for coal at the Watermark site. 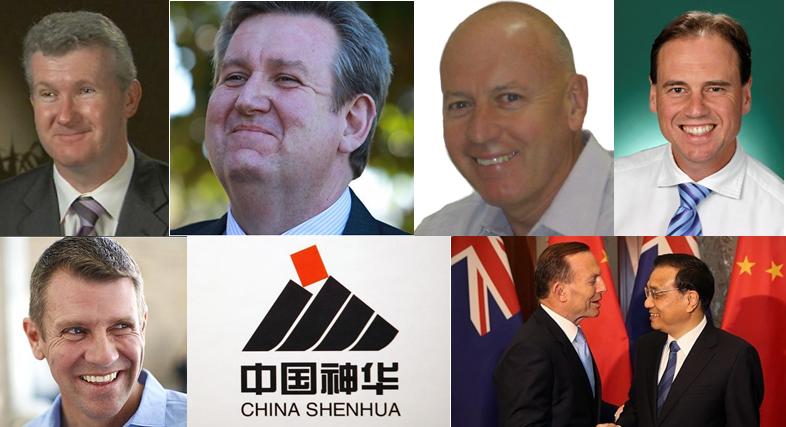 On July 4, 2015, Liberal Environment Minister Greg Hunt announced he had approved and signed off on a 35 square kilometre open-cut coal mine in the heart of Australian prime agricultural land in the Liverpool Plains of northern New South Wales.

The massive three mine project is to be located 25 kilometres south-east of the northern NSW town of Gunnedah.  The land and mining license are now owned by China’s communist state-controlled Shenhua Group, headed by Chinese commo-capitalist Liu Xiang.  It is treachery of the highest order. 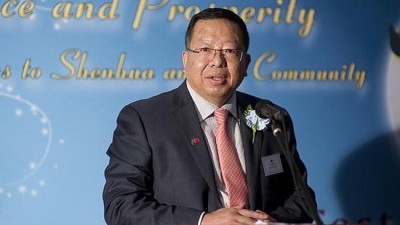 The mine is expected to produce as much as 268 million tonnes of coal during its 30-year life.  Shenhua since 2008 has been secretly buying up quality farmland on the Liverpool Plains for its planned coal mine.

It’s all about reaping billions in mining royalties to fund Abbott’s Badgery Creek immigrant airport infrastructure in outer western Sydney so that millions of foreigners can overrun and congest Sydney even further.   Meanwhile the fabulously rich black soil of the Liverpool Plains and the agriculture that it sustains are to be trashed forever along with generations of Australian farmers and their communities.

Tony Burke white-washed approval for the mine when in March 2013 as former Labor environment minister, he withdrew a referral for scientific investigation by Australia’s national Independent Expert Scientific Committee into the Shenhua Watermark project.

Chris Hartcher in 2013 as Liberal Party’s NSW resources minister specifically exempted Shenhua’s exploration licence from having to comply with the state’s Water Act 2012, so avoiding compulsory national assessment of proposed mining on water resources.   Fiona Simson, president of NSW Farmers, said the approval process had been flawed including the decision by Hartcher to exclude Shenhua and BHP Billiton – which is planning a separate coal mine in the region – from standard flood-plain provisions limiting construction and other activities.  Shenhua and BHP are the only two groups “operating on the flood plains of all of NSW that don’t have to comply to the flood-plain definition”, she said.

So Greg Hunt on July 4, 2015 approved the Shenhua Watermark coal mine, ignoring the fact that most of the impacts have not been assessed and using the pitiful political excuse that his hands had effectively been tied on the decision to approve the controversial mine, because rejection would have sparked a legal challenge and potentially less stringent controls.

“With six scientific reports, with legal advice, with departmental advice, any decision other than the one we made would have been challenged and – on all advice that I have — rejected by the courts,” he said.

Crap!  Hunt’s got no balls to stand up to the Chinese!

Who owns this country, Australians or the Chinese?  In Greg Hunt’s feeble head, guess… 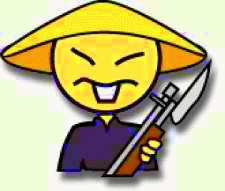 Shenhua requires both state and commonwealth approvals to lawfully mine and work on the site.  So NSW Liberal Premier Mike Baird was very quick to welcome Greg Hunt’s announcement.  This week at the NSW Farmers Conference Baird spun the claim that the Shenhua coal mine approval has been looked at extensively by scientists and evidence shows there will be no impact on water quality. “The science has come back and it says the impacts aren’t there”, Baird has claimed.

Liverpool Plains farmer Peter Carter stood up in the conference and told the Premier sometimes scientists make mistakes.  “If you are wrong and the scientists are wrong with this, that will go down in history as one of the biggest blunders that’s ever occurred,” he said.

Liberal PM Tony Abbott, an enthusiastic advocate for coal, claims the mine had passed all required tests.

“As all the science tells us, it’s not going to have an impact on the water table. And frankly, if it’s not going to damage the farming areas, if it is going to bring billions of dollars worth of economic activity and hundreds of ongoing jobs, I think we should say ‘let’s go with it’. Mining and agriculture have coexisted for 100-odd years in this country, they can and should continue to coexist in the future”, he said. 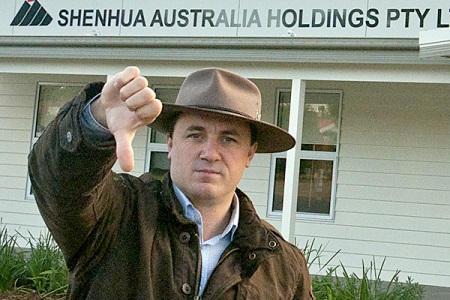 Greens MP of the NSW upper house Jeremy Buckingham demands Shenhua “come clean” on its exploration licence ‘EL7223’ and release key documents behind Ian MacDonald’s dodgy project approval and why the fee was so high at $300 million.

Tim Duddy, a farmer whose land lies partly on the proposed site, said Mr Hunt failed to understand the difference between so-called consumptive water extracted by farmers and the potential for intercepting and disrupting groundwater supplies in the region.  “It’s not the water that they’re taking that’s the problem,” Mr Duddy said. “It’s the water that they’re harming.”

“This is the most significant groundwater source in the Murray-Darling Basin,” he said.  “Once the Liverpool Plains is harmed – and it will be – it will no longer be about co-existence, but sequential land use and the destruction of agriculture.  It’s been war for a long time, but now it’s really war,” he said.  “This community will do whatever it takes.”

The irony of Greg Hunt signing-off on the mine on the same day, Nationals deputy Barnaby Joyce, who is Abbott’s lap dog Agricultural Minister, released a white paper into “Agricultural Competitiveness”. 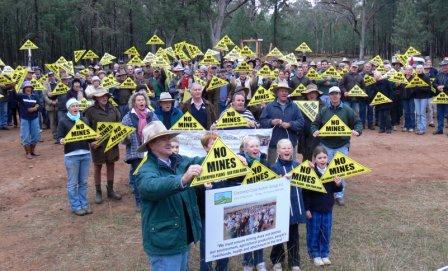