Responding to a complaint by United Nationalists Australia (UNA) that a person favouring its clothing brand had perpetrated a criminal attack on two nationalists in Sydney the Construction, Forestry, Mining and Energy Union (CFMEU) provided a perfunctory response.

Whoever administers their Facebook page firstly issued a disclaimer regarding their retail merchandise by inferring it must’ve been a random someone who just happened to buy their clobber. No bona fide union member would dream of committing such a contemptible act. Then they advised us to contact police.

They may as well have recommended we alert Dominoes Pizza. The suggestion although outwardly sensible belied the responsibility, indirect or not, this most militant of unions have for the radicalisation of the lumpen idiot responsible. Dave Gullis, the scaffolder who threatened the life of the AFP President and vandalised the home of a member on Dec 7, sports his CFMEU togs with pride. But there is more to Davey boy.

No bona fide union member would dream of committing such a contemptible act. Then they advised us to contact police.

The CFMEU leases offices at its Kremlin at 12 Railway St Lidcombe, Sydney. A conference room on this floor is availed for meetings to both the Communist Party of Australia (CPA) and its estranged but similarly anachronistic counterpart the Communist Workers Party of Australia (CWPA). These extremist groups have no qualms about flying the genocidal hammer-and-sickle symbol. Therefore, the CFMEU is well aware of these groups’ agendas.

One member of the CWPA, named Yousef, who cultishly styles himself as an imitation of Che Guevara, was earlier this year exposed by UNA as demanding the very two nationalists who Gullis harassed be physically assaulted by its members. It is unlikely Gullis’s choice of targets was a coincidence or that Yousef is unknown to him.

As the CFMEU prepares to merge into a “super union” that will comprise the Maritime Union of Australia (MUA) and the Textile Clothing and Footwear Union this integration will in theory position the zealots of Antifa into the globalist Labor party’s field. 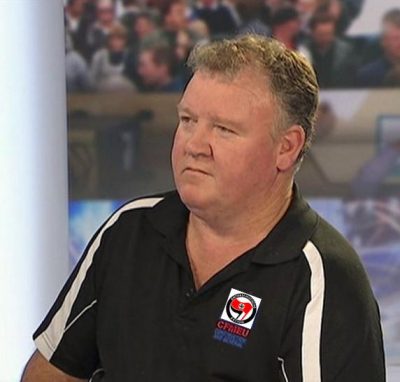 UNA and other committed nationalist commentators have established how the Liberal party has over the years suckered in the naïve. They engage operatives and satellites to beguile far-right greenhorns with misrepresentations about how the Liberal party harbours racialist sects dedicated to nationalist principles. These sleeper cells, they promise, are waiting for the strategic moment to rise and revolutionise the Liberals to a national socialist course. It is all bullshit. But this is no different to what the Labor party does with its own extremist base.

Labor trades on its former associations with the worker but has consciously drifted from its unionist roots. While still happy to take their donations the dynamic of the relationship has changed.

One member of the CWPA, named Yousef, who cultishly styles himself as an imitation of Che Guevara, was earlier this year exposed by UNA as demanding the very two nationalists who Gullis harassed be physically assaulted by its members. It is unlikely Gullis’s choice of targets was a coincidence or that Yousef is unknown to him.

Once the greater proportion of elected ALP members of parliament were union officials. There are now only about 45% of those with direct links. There are a small number of affiliated unions that still carry clout within the party, and they were named in a piece by The Conversation as being The Shop Distributive and Allied Industries Union, Transport Workers’ Union and the Australian Services Union.

These affiliated unions are still able to influence the ALP through discreet internal lobbying along party structure lines. Yet, as the same article points out, there is a fallacious notion about the power unions wield within the party. Here, factions such as the Socialist Left and Centre Unity, make the decisions. To quote the piece, “The factions are unified less by ideology nowadays, but have been characterised as clans that distribute influence and rewards.”

Those parliamentary members tend not to come through the union ranks anymore and even if they have enjoyed the support of unions the political experience recalibrates their views and priorities. Likewise, those influential unions operating within the party generally promote their own agendas.

In other words, all the promises for the workers are broken at the other end as the ALP has long outgrown its traditional support base. In a way, far from the hard-forged socialist rhetoric of the meeting hall, the ALP has assumed more the qualities of the neoliberal American Democrats. This again echoes how the conservatives such as Cory Bernardi and Pauline Hanson divert nationalist sentiment into support for its absolute antithesis – global capitalism and global consumerism. Labor has as much a sell-off-the-farm policy as the conservatives do. Suddenly the ‘worker’ is an international citizen and not an indigenous unit of labour whose rights must be protected.

When a program of free and open immigration brings down wages then opposing it must seem sensible enough. Trade union leaders should be the first to understand how mass immigration affects the worker but here you have “the workers” all rallied in various sub-factions ready to protect the interests of global capitalism. To this end, Antifa spares the government the need to oppress far-right opposition. In turn, through their carjacking methods, Antifa has done more to contribute to the strengthening of police powers than their adversaries who, ironically, lobby on a genuine working class platform and in the traditional spirit of the original Labor movement.

Labor has become so divorced from its working-class roots that the only time its elitists can stomach the workers is during press opportunities and on election days. The modern Labor party is the purview of the restaurant radical.

Victorian Premier Daniel Andrews is a solid example of what Labor has become serving as he does without ever once having put in a hard day’s slog. Palaszczuk sux CFMEU BrisVegas cock every night. Consequently, those revolutionaries shuffling their feet back down the chain spare little mind to the beneficiaries of their actions.

Given there is no longer historic fascism the zealots that the CFMEU entertains have simply painted a ‘Nazi’ face onto the enemies of globalism and given our side a Holocaust-centric narrative. All of this points to Antifa being just another construct of the state.

When the extremists who manipulate these globalist army irregulars sound their clarion call the union responds. They did so in 2014 when the Australia First Party and the now defunct Golden Dawn Australia (Hellenic Nationalists of Australia) held a demonstration in Brisbane to support of the Golden Dawn elected officials being held in indefinite detention in Greece. The demonstration turned ugly when members of the CFMEU rolled up waving their banners and spoiling for lashings of the old ultra-violence.

Later, when members of the AFP were unwinding at a local bar they were subject to a flash attack in brought daylight by CFMEU thugs. One of those assaulted was an elderly man. The union hooligans did not concern themselves with such courtesies as not attacking women or the elderly. In the case of union organiser Luke Collier, he had done both. For his assault on the AFP members, he served three months jail while his compatriot Joe Myles was let off on a technicality.

There has been no shortage of CFMEU members mingling with Antifa at counter rallies against Reclaim Australia and the like. On the day of the Brisbane GD rally, however, it was clear that those unionists (sic) had been organised from outside. We lay the blame for that craven act of organised thuggery squarely at the feet of the terrorist Slackbastard. 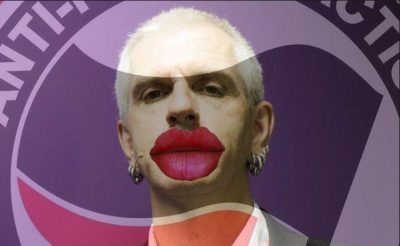 Now more than ever those within the media, especially the ABC, should be put under pressure to reveal the unknown member of the Slackbastard group. It has become a matter of strong public interest to unmask this dangerous bigot. We have identified Professor Rob Sparrow from Monash University, a person with historical family ties to the extreme left, but now it is time to unveil the remaining Wizard of Antifa; the one who doesn’t mind getting blood on other people’s hands.

Doubtless, it was Slackbastard who was behind Dave Gullis’s criminal acts against nationalists on December 7. Yet, as we have argued, how does serving any of these globalist interests have to do with the workers?