On Australia Day, Julia Gillard gets a Companion of the Order of Australia from PM Turnbull?  What the?  Can’t believe in hugging witches who ruin this country. Well at least she’s no Abbott dame. Wears the pearls, the polka dots and now the AC.

This token AC medallion is a commie Gough Whitlam invention anyway from 1975 when he was on the nose with the Australian public. He copied Canada anyway, comrade. [Read article below]

These accolades mainly get given by the PM of the day to former politicians as if a ‘no hard feelings’ and ‘thanks for coming’ convention.  Somehow Canberra has snuck in a convention for former prime ministers to receive an AC in order of when they left office.  So it makes it all rather meaningless being so automatic a convention.

Frankly, it’s up there with street naming and ribbon cutting.  Outlaw bikies get a medallion after they pass initiation, usually after bashing someone.

Gough of course got one (he invented the ‘Order’ thing because as a republican he was pissed off with pommy knighthoods).  Gough’s mate Malcolm Fraser got one,  and Johnny Howard, Bobby Hawke and even Kimmy Beasley (who also got transportation to America) plus many other Canberran elites.  Unfortunately Kev is still out of favour since his UN dummy spit.

It’s not as if they sacrificed themselves to save Stalingrad from the Nazis. 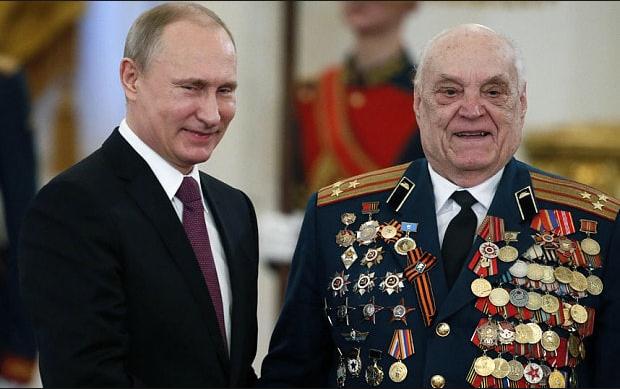 Now there’s someone more deserving of medals, with a chest to pin them on.

And there’s a Red Star somewhere in there – Gough probably considered it.

So what did Julia get her companion AC for?  Services to misogyny and feminazism?  Emily listers are lining up. What happened to Tim and Reuben and her live-in lady friend? Apparently Julia got it for “eminent service”. What, for Australia’s debt, for empty school halls, for her carbon tax lies and the 50,000 illegals?

How undeserved.  It makes a mockery of the Order of Australia chivalry system when anyone can get one and when pollies automatically get the top one.   Isn’t her polly annual pension of $370,000 enough?

Lesser mortals only get an AO, AM or OAM – whatever they mean and whatever the difference is?  America has a secret society of dubious medal wearers The Royal Antediluvian Order of Buffaloes.  They’ve had secret chapters in Australia since the late 1950s.  Anyone can call themselves “the Most Exalted Order of the Star Grand Poobah of Callithumpia”.

Former PM Paul Keating rightly turned down Gough’s gong in 1997, saying he believed honours should be reserved for unrecognised achievers.

Since 2000, almost 150 potential recipients have knocked back Gough’s Order thing.  Stephen Brady, the official secretary to the Governor-General who is the one who puts it around your neck as long as you turn up to Canberra, says “The most common reason given for non-acceptance was modesty.”

Perhaps they should also issue a wooden spoon award for the most useless politician…The Order of the Toad’?

The Order of Australia: still a substandard product

“At a conference of the Samuel Griffith Society in August 2014 Sir David Smith KCVO, AO delivered a paper entitled “The Order of Australia: In the Beginning”. To crib from the title of Dean Acheson’s second volume of memoirs Sir David had been “present at the Creation”. As Official Secretary to five Governors-General from 1973 to 1990, he was closely involved in the establishment of that Order in 1975 and was its Secretary for fifteen years until his retirement in 1990.

Sir David’s account is a credit to him and to the Governors-General in that period. Proposals which risked undermining the Order’s integrity were successfully resisted. And yet! And yet! His paper reminded me of the poet Roy Campbell (1901-57) assessing some novelists of his native South Africa:

You praise the firm restraint with which they write —
I’m with you there of course:
They use the snaffle and the curb all right,
But where’s the bloody horse?

Unfortunately “the bloody horse” Smith so fleetingly identified turned out to be, not a thoroughbred, but a brumby.

The Order of Canada which Gough Whitlam singled out as the model for the Order of Australia is by any international ranking a substandard product and ipso facto so is Australia’s only Order.

Christopher McCreery recorded in his definitive study: The Order of Canada: Its Origins, History and Development (2005) that the fourth Viscount Monck who served from 1861 to 1868 first as Captain General and Governor in Chief for the Province of Canada and then as Governor-General of the Dominion of Canada wrote to the Colonial Secretary, Lord Carnarvon, as early as 7 September 1866 recommending that the new Dominion establish a local Order.

He suggested an Order of St Lawrence modelled on the Most Exalted Order of the Star of India which had three classes: Knight Grand Commander (GCSI), Knight Commander (KCSI) and Companion (CSI) the top two classes carrying the accolade of knighthood as with the Most Honourable Order of the Bath and the Most Distinguished Order of St Michael and St George. With unbelievable shortsightedness, the Colonial Office rejected this proposal as “too unconventional”.

Unfortunately, the issue of a local Canadian Order remained unresolved for more than a century. As McCreery observed, “Had such a system, separate from other Imperial honours, been conceded, Canadians might have been more favourably disposed in the early twentieth century to recognise their fellow citizens with titular honours.”

Even so, the suggestion that a local honour be created for Canada did not go completely unheeded, and a partial solution was devised. But it was not one that applied to Canada alone. Over the following half-century, the Most Distinguished Order of St Michael and St George served as the chief mechanism through which eminent politicians and public servants were recognized, not only in Canada but throughout the British Empire.

And at the end of that half-century? Vincent Massey, a long-serving but, at the hands of his Prime Minister, a long-suffering High Commissioner in London and Canada’s first native-born Governor-General was a committed proponent of a Canadian honours system. As he recorded in his memoirs:

The story of honours in Canada since the sweeping [Nickle] resolution in the House of Commons in 1919 abolishing in effect all decorations of every description makes fantastic reading… It does not read like the record of the mature country that we believe we are. The principal actor on this stage was [William Lyon] Mackenzie King, whose attitude on such matters during his long period in office seemed to be nothing less than pathological…

The honours question passed through many phases, but always it was evident from the documents that the Prime Minister of the day was determined to bury the question as deep as he could. (I hope I will be forgiven if I mention the fact that after years of effort to eliminate honours from Canadian life, he was prepared to accept the Order of Merit from the late King [George VI] and the highest decorations of a number of allied powers at the end of the Second World War.)

McCreery identified those allied powers as France, Belgium, the Netherlands and Liechtenstein. Those awards made him the most highly and most colourfully decorated Canadian statesman ever.

In inaugurating the Order of Canada to commemorate the centenary of Confederation Lester Pearson as Prime Minister obstinately and perversely repudiated the many proposals discussed over the years for a four/five class Order comparable to the Order of the British Empire and the French Légion d’Honneur.

He was completely untroubled that his three-tiered Order of Canada – Companion (CC), Officer (OC) and Member (CM) — compared so unfavourably to such Orders and their international counterparts in terms of status and insignia. Mackenzie King’s ghost must have chuckled. (Bruce Beatty designed insignia for a five class Order including the addition of breast stars and sashes after his designs were adopted for the three class Order of Canada in 1972.) What if Pearson had inaugurated such a five class Order! Would Whitlam in that event have been at all attracted to it as the model for the Order of Australia? Or might he have felt drawn to some of the grottier specimens spawned by the Soviet Union?

At a conference on Commonwealth honours in 2006, Christopher McCreery was reported as raising the concern that the three grades of the Order of Canada were insufficient to recognise the nation’s very best. One suggestion was to add two more upper levels to the Order making it comparable to British Orders.

New Zealand had earlier inaugurated a five class Order along those very lines. Should not Australia reconstitute its only Order along similar lines? And might not more than one such Order now be required to serve this country’s needs?” 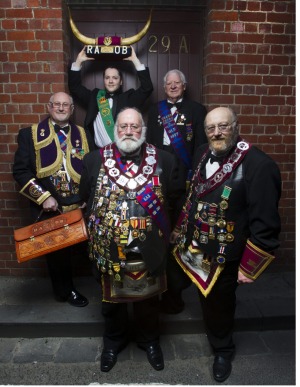 The Royal Antediluvian Order of Buffaloes. More medals on offer than in the Scouts