Premier Mike Baird (das Führer):  “We have taken decisions that are in the interests of ratepayers“.

But just as Baird’s corrupt IPART approved the forced council amalgamations, IPART has also approved rate hikes for 30 councils up by as much as 20%.  IPART (The Independent Pricing and Regulatory Tribunal) is the tool of das Führer. 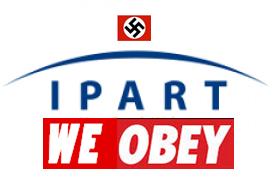 IPART uses KPMG’s methodologies, assumptions and dodgy statistics to justify all.  IPART’s fitness for future proposition is as corrupt as its so-called ‘independence’ from government, from party politics and from vested interests like Manildra’s.

In relation to the council mergers, Liberal Party Minister for Local Government Paul Toole blatantly betrayed his pre-election pledge prior to the 2011 State Election that under a Liberal Government there would be no forced mergers of councils.

Paul Toole, the then Nationals candidate for the seat of Bathurst signed a letter, along with then Opposition leader Barry O’Farrell and Deputy Leader Andrew Stoner, assuring Oberon Council it would not be forced to merge with Bathurst Council. 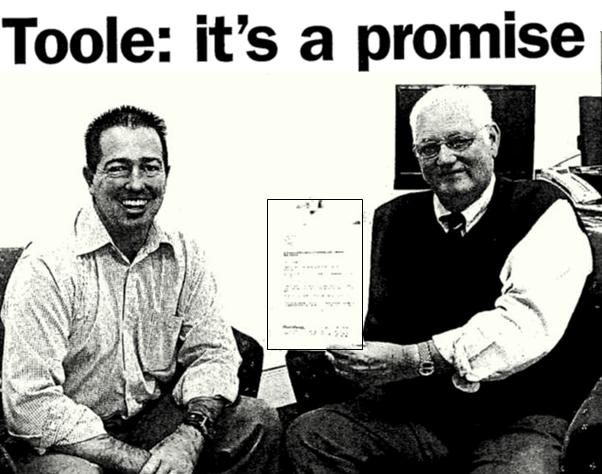 “..reiterated the NSW Liberals and Nationals’ long-standing opposition to forced council amalgamations”.  A Liberals and Nationals government will also ensure there are no forced council amalgamations…Should local councils decide it is in their best interests to merge or enter into a strategic alliance we will support them; however, in government we are committed to leaving these decisions solely in the hands of local government authorities.” 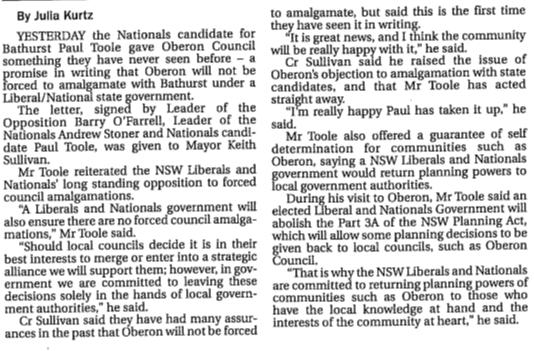 And again when Paul Toole was sworn-in as Minister in 2014, he again pledged his opposition to forced mergers, saying: “The government has stated there will be no forced amalgamations and I aim to honour that.”

Liberal Dalek 1: “You will move ahead of us and follow my directions. This way. Immediately.”

Liberal Dalek 1:  “Your legs are paralyzed. You will recover shortly, unless you force us to use our weapons again. In that case, the condition will be permanent.”

All Liberal Daleks: “Tomorrow, we will be the masters of planet LNP!” 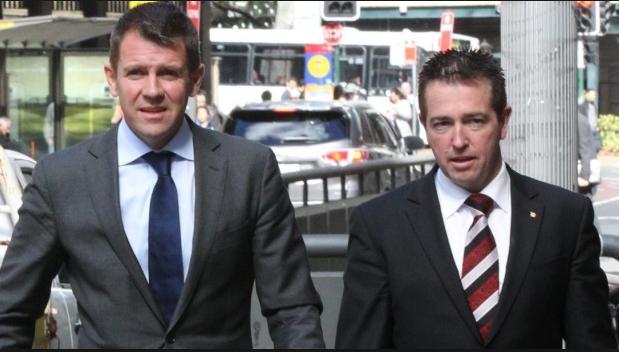 “Local Government Minister Paul Toole said there would be no forced amalgamations, however he is now bullying councils to do the thing he said would never happen,” he said. “This is a day when democracy is on the rack and people do not take kindly to politicians who tell lies.

Alan Jones also slammed the recent IPART inquiry that labelled our three local councils as unfit for the future on the grounds of size and capacity, despite their financial position being sound.

“The argument that bigger is better has been exploded as an almighty myth and if they’re going to lie about this issue, what other issues are they lying about.” 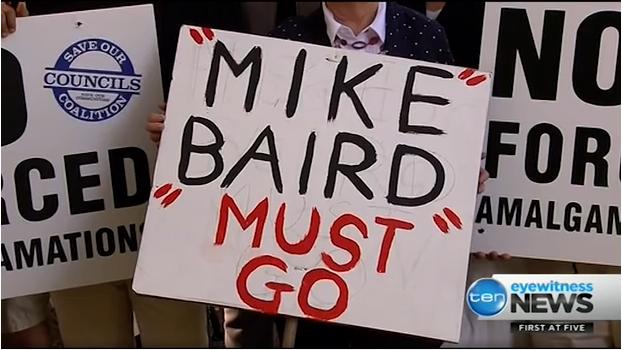 “Baird says local councils are losing millions of dollars a day,” Mr Rhoades said.  “What a load of bull, we’ve got the evidence and we’ve presented the evidence to this government.”

“I suspect Malcolm Turnbull’s re-election campaign will be disrupted more broadly than in the key marginal seats, thanks to Mike Baird’s undemocratic council amalgamations (“Baird plan threatens PM”, May 14-15). Voters now will surely wonder what a post-election Turnbull might do. I suggest that if Turnbull is re-elected he will do a “Baird” and ride roughshod over us.”
by Graham Lum North Rocks

“The people of NSW are  now reaping the benefits of voting for an oh-so-wonderful Mr Nice Guy with a winning smile, bountiful promises and comforting reassurances. So on July 2, before you answer the knocking on the door of your non-harbourside non-mansion, consider very carefully the flash of blue tie and cold sharp steel beneath the sheep’s clothing.

“Please dear voter, please vote me in?” Not by the hair on this chinny-chin-chin!”

“Tumbarumba Council was deemed fit for the future, is the winner of the Bluett Award for excellence in council administration, has a community fully behind no amalgamation, and was recommended not to be merged by the consultant, and yet will be forced to amalgamate with a council over 80 kilometres away. Totally absurd.

Oh wait. Tumbarumba is not in a marginal electorate. Mike Baird, beware of the folk from the mountains. We will not be moved.”
by Noelene Haslett Tumbarumba Shire councillor 2003-2008, Tumbarumba

“A cornerstone of democracy is that we vote for those who spend our taxes. With the Liberals’ sacking and merging of local governments this cornerstone is removed. Many are angry – but what can we do?
We wait for Mike Baird’s administrators to green-light over-development. We wait for Luke Foley’s promised plebiscite. But we forget that ratepayers vote for local democracy every three months. It would take only 10 per cent of ratepayers to forget to pay. A rate strike would be an administrative nightmare for the administrators. A real revenue problem. Revolutions have been fought – and won – on this principle. No taxation without representation.”
by Peter Greenland Summer Hill

Instead of heeding the concerns of residents and councillors, boundaries as proposed were accepted without change and revenue-raising commercial, industrial and high-rise residential hubs have been deliberately cleaved from Cumberland in order to supercharge the new Parramatta Council, a Turnbull-anointed Global City.

Taking advantage of residents’ general lack of awareness to push for a legal fight, it seems the Premier has accepted inequity over inclusion and sustainability.”
by Inara Molinari Granville

“Yes…Mike Baird has form when it comes to disregarding democracy. In February 2015, this government specifically amended the City of Sydney Act  as part of its plot to unseat democratically elected Clover Moore.

The amendment audaciously challenges Lincoln’s idea of government of the people, by the people, for the people. It does this by making corporations eligible to vote in the City of Sydney Council election. That’s right, non-human, legal fiction, limited liability, for-profit entities, including those with non-Australian ownership, get to vote. And what’s even more distorting and perverse, is that those businesses can get two votes via nominees, whereas actual human citizens get only one vote. This serves democracy how?”

“Mike Baird’s council amalgamations have something in common with his approach to biodiversity; a resolute refusal to acknowledge the importance of locality and context. The forced amalgamations seek to impose a one-size-fits-all model across the entire state and the biodiversity legislation seeks to make unique ecological communities in disparate parts of the state equivalent with its dubious environmental offset schemes.

Baird would be best to remember that there are many of us who love variety. Oh, and democracy, too.”
by Chris Burns Forestville 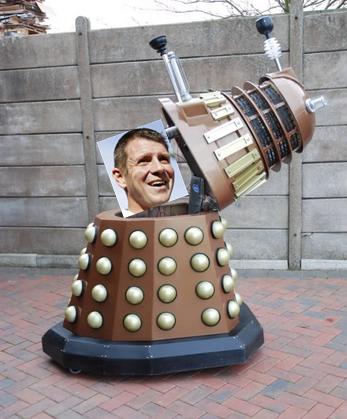