Within 24 hours of this photo being published in the Murdock media’s newspapers throughout Australia (city and country), Malcolm Turnbull on September 14, 2015 was able to secure the nervous numbers to undemocratically depose a Prime Minister by secret ballot inside the Liberal Party – 54 to 44. 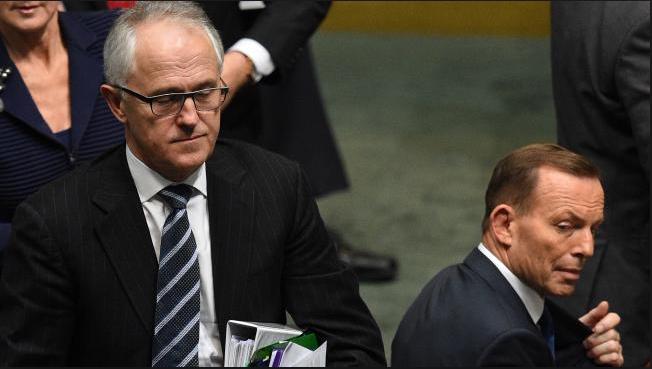 But Turnbull didn’t depose a Prime Minister; an influential media fear campaign did.

Whether Australians support Abbott, Turnbull or even Shorten is irrelevant.  All Australians should feel undemocratically cheated – just like what happened under Labor with Gillard, Rudd, Hawke and Whitlam.  Australians deserve better than this.

What had triggered the leadership challenge was a concerted campaign by conservative corporate media over more than a year since Treasurer Hockey’s divisive austerity budget of 2014 and after a series of decision bungles by Abbott and his ministerial team.

Rupert Murdock and his immediate family own News Corp Australia, which has 40% market share of print media across the country through every electoral seat. (IBISWorld Market Research 2013).  Murdock himself is well-known as a vocal committed conservative. He votes Liberal and could even be a member of the Liberal Party.  Despite living in the U.S., Murdock comes from Adelaide and maintains a close interest in Australian politics.  His newspapers are notorious for bias support for the Libs and for influencing election outcomes in the led up to elections at both federal and state levels.

He and his media empire have a vested interest in ensuring the Libs retain power and keeping the Green-Labor lefties out of power.

Clearly, with conservatives like Murdock adamant about keeping Labor out of power, support for the Liberal Coalition translated to making sure they stayed in power.  With PM Abbott and his poor judgment less likely to ensure a second term, the conservative media power brokers would use their influence to find a replacement who would.

Influential pollster, Newspoll is but a polling brand administered by Galaxy Research, owned and controlled by News Corp Australia and it’s reach is national being published by The Australian newspaper – also owned by the Murdock media empire.

Newspoll is well known for political polling.  Newspoll’s surveys of voting intention are published exclusively in The Australian.  But its polling methods are dodgy – using skewed questions and automated robodial polling to landlines and online polling.  Calls are specific to a region, which meant they could be biased towards a demographic.  Ninety per cent of calls are unsuccessful, so the ten per cent are used and diddled tp a prescribed agenda.

Media polls influence not just voters but MPs, especially backbenchers and those nervously clutching on to marginal seats.  After two terms of Labor, many Liberal and National Party MPs were adamant about ensuring the Liberal Coalition would win a second term in 2016.

So on September 13, when the Galaxy Poll for the Liberal’s WA seat in Canning published a forecast 10 per cent swing against the Liberals on a two-party preferred basis, Liberal MPs in marginal seats got really nervous about their tenure.

That was the whole intention.

But the pollster forecast turned out to be crap. The Libs new candidate Andrew Hastie kept the seat for the Liberals with a 5% health margin.

Yet the purpose was the next day to convince enough Liberal MPs to vote against Abbott and for Turnbull on the basis that Turnbull would have a better chance winning the 2016 election for the Libs than Abbott and increase the margins in the Liberal marginal seats.

The deposing has widely been interpreted by even disinterested Australians as one of polly self-interest.  It would be played out again by the Liberals three months later in North Sydney, when Joe left and Jewish Trent Zimmerman was installed.

Canning had been a safe Liberal seat under their long-standing MP Don Randall.  But he died and so triggered a by-election.

The media played this by-election as a national campaign to convince Australians that the Canning by-election was a litmus test for the Libs under PM Abbott.

Strategically timed just days ahead of the by-election, on September 13, the Murdock media’s Galaxy Poll published a forecast 10 per cent swing against the Liberals on a two-party preferred basis, meaning that Canning had deteriorated to being a marginal Liberal. 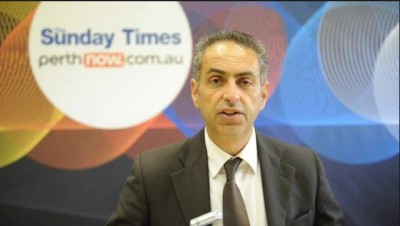 “This puts Labor at the door – not knocking, but banging to get through. It will play out a little further down the track at the 2016 federal election.  And it’s the potential of where that story could be headed that will have every Liberal MP in the country nervous this morning.

Don’t forget, the Liberals have also heavily outspent Labor at this by-election, triggered by the sudden death of their party stalwart Don Randall.
However, it’s not a Labor win in Canning that will have Liberals worried today.

Their concern is if that swing is replicated across the state.

A 10 per cent swing means the Liberals could lose Cowan, Swan, Hasluck, Pearce, Stirling and the new seat of Burt.
Almost certainly Steve Irons, Luke Simpkins and Ken Wyatt would face unemployment. So much for the Liberal Party’s stranglehold of the west.

And then there’s the rest of the country.

In the email to Liberal MPs and senators at the time, Simpkins said he had been inundated with emails and visits to his electorate office questioning the Government’s direction.

He said Abbott’s decision to grant Prince Philip a knighthood on Australia Day “was for many the final proof of a disconnection with the people”.

“These contacts have come from many people that I personally know and are firm supporters – in some cases they are booth workers,” Simpkins wrote.

If Canning goes wrong, as our poll suggests it could, then it won’t just be the backbenchers out for blood.

WA Liberals such as Julie Bishop, Mathias Cormann and Michael Keenan are all senior ministers in Abbott’s Government.

Bishop has waited years for the political life she now leads.

Faced with the very real possibility of returning to opposition in 12 months, you have to wonder what her thoughts would be this morning?

Throughout this election, Abbott and the Liberals have insisted this was not a referendum on the Prime Minister’s leadership.
Of course it is…As much as Liberal candidate Andrew Hastie and his strategists have tried to make this by-election about local issues – there is no escaping it is a litmus test of Abbott.”

So who in the conservative media knew what when?

Considering the Murdoch media spends significant coverage supporting the Coalition, newspapers poll results just add to the propaganda message.  Many of the so-called ‘opinion polls’ are clearly rigged to suit the political agenda of the newspaper owners.

Galaxy, Newspoll and the Murdock media sets the agenda and determines the result of an election before it’s been held. That’s not a democracy.

Fairfax and the ABC do it for Labor.

Then there’s this newspaper article on September 13, 2015 by Murdock media’s national political editor at The Sunday Telegraph, Samantha Maiden, using the lead image above.

In less than 24 hours, a Prime Minister would be deposed: 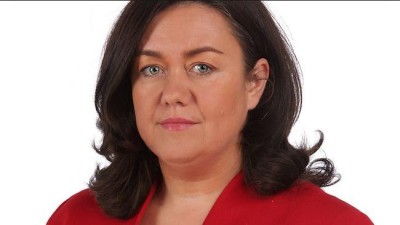 “Chinese military strategist Sun Tzu’s ancient book observes that “the supreme art of war is to subdue the enemy without fighting’’.

This appears to be the strategy of leadership aspirant Malcolm Turnbull, who is maintaining a vow of complete silence as Tony Abbott’s leadership is once again assaulted by unseen forces.

Sun Tzu’s advice, first issued circa 500BC, gets a bad rap these days after it was popularised by everyone including Hollywood director Oliver Stone in Wall Street, but let’s examine the evidence.

Turnbull conducted a single press conference on Monday, noting the Government was in “the best of hands’’ before spending the entire week in silent media repose. Tranquillity and calmness, thy name is Malcolm.

There was not a peep out of him even on social media between Monday afternoon until Friday, when he posted dawn shots of Melbourne’s “magnificent’’ Flinders St station at 6.06am.

Then he hopped on a tram — he loves trams does our Malcolm — and visited a school with frontbencher Josh Frydenberg.

Yesterday morning he was in Sydney, walking his dog. Silence.

Meanwhile, the wheels had completely come off the Abbott Government on Friday in a series of unforced errors.

Peter Dutton’s gag about “Cape York time’’, suggesting a certain tardiness to the north, and jokes about Pacific Islanders not caring much for punctuality either when there was water lapping at their door, was captured on an open microphone. Stories emerged that the PM had humiliated frontbencher Andrew Robb at a dinner party for backbench MPs.

The Government mentally unhinged into a Cluedo game of paranoia over predictions of a major Cabinet reshuffle and reports the PM would sack his praetorian guard of Kevin Andrews and Eric Abetz.

Why would anyone suggest that? More Sun Tzu: “If his forces are united, separate them. If sovereign and subject are in accord, put distance between them.”

There is a reason, just quietly, why the PM has barely touched his frontbench since 2009. Reshuffles are disruptive and historically have triggered leadership revolts, not quelled them.

The Prime Minister had a strong week announcing 12,000 places for Syrian refugees — a more generous response than the United States — and getting traction on Labor’s opportunistic complaints about the free trade deal. But by Friday, everything was turning to cactus.

So, what is Turnbull really up to? Supporters of the Prime Minister insist it is another Sun Tzu-ism that offers insight: “If you are far from the enemy, make him believe you are near.’’

Translation? Turnbull doesn’t have the numbers and won’t get them. He would have challenged in February if he had the numbers.

But how does he get there? Julie Bishop has traditionally argued the leadership is for the party room. Scott Morrison’s best hope of a bloodless transition is to play dead when it comes to protecting the PM. Which frontbenchers would fire the starters’ gun?
Macca’s view.

In recent weeks, Turnbull has travelled around Australia, visiting marginal seats in Queensland, Melbourne, NSW and even popping over to Perth to campaign in the Canning by-election. This was a flight across the Nullarbor that plunged the Prime Minister’s camp into deep, deep, paranoia.

Today’s Galaxy poll suggests with good reason because if a swing of 10 per cent is replicated on polling day leadership speculation will reach fever pitch.

There was chatter this week that Turnbull might challenge this week if the Canning by-election swing was modest. After this sitting week, Parliament takes a three-week break.

Today’s poll suggests the Canning swing will be big, despite the Liberals blowing $1 million on the safe-seat campaign.

What will Turnbull do next?

As Sun Tzu notes: “In the midst of chaos, there is also opportunity.” 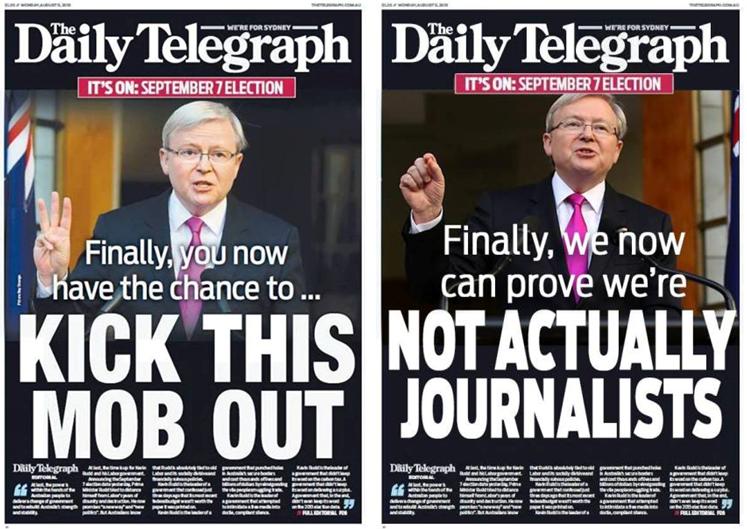 So what did Samantha Maiden know and when?

It seems Samantha Maiden, having been denied scoops decided to have it in for Tony Abbott’s Chief of Staff, Peta Credlin.

Google search of the two… 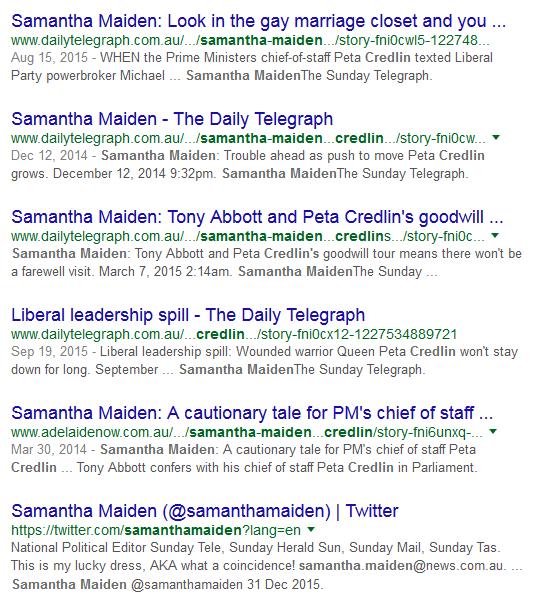 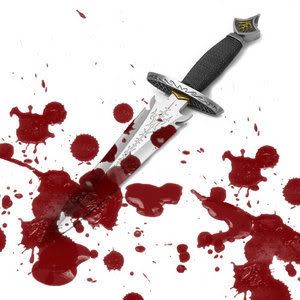