The public face of refugee advocacy is the director  of the Refugee Action Coalition – Ian Rintoul. 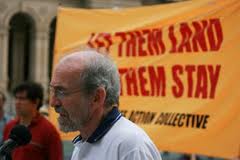 Rintoul appeared on Radio 2UE on June 11 to say that there should be a policy that anyone who seeks to come to Australia can come. On June 22, in answer to a question from John Laws, he said that there was no limit to the number of refugees (his term for them) who should be permitted entry to Australia. He added that we should all be prepared to accept a lower standard of living.

Rintoul is a long standing Trotskyite communist, a matter to which we will tell you more. But first, understand that Rintoul owns properties and his mother owns an old style country homestead in the Southern Highlands.

Rintoul, the man, has not offered to “share”. He expects us to.

We have often pondered the logic of Rintoul and some of those in his Coalition.

Although it may be at first hard for ordinary people to follow, Rintoul’s goes something like this:

This is the cry of a lunatic.

The Australian working people have a country, an identity and a future. They want their country and they want to take it back it back from the globalists and their cheap labour identity-free hordes.

If Rintoul was to go to a building site to raise funds – as he has done but with little success – and to accidentally fall off the scaffolding, we don’t think the Australia would miss him.