Back from holidays into 2013, The Gillard’s two platoons of media advisers have hit the ground running.

Gillard took Christmas back in her home town of Adelaide, but instead of taking a break from spending, she took the taxpayer cheque book with her.

Her spin meisters have returned from the Christmas break fully spinning: “Prime Minister Julia Gillard returned from holiday yesterday and delivered a late gift to her former home town of Adelaide – to the tune of $30 million towards the redevelopment of Adelaide Oval.”

So in Gillard’s head, spending by Labor this time of year is not actually spending, it’s GIVING – different.

Funding mates at home, sounds like something out of Sussex Street – O’Beid and familia?  Gillard has visited her home town of Adelaide and ‘gifted’ $30 million to the local sports club while at it.  She just happened to have the taxpayer cheque book in her handbag.

And Gillard’s chief spin doctor, Blair Labor’s import, John McTernan, seems to have worked through Christmas. Only he could twist more Labor Waste into the following media release:

“Ms Gillard has been on leave since December 18 but made it clear her mind was never far from the job, saying she had been in constant contact with Immigration Minister Chris Bowen and her cabinet colleagues throughout the negotiations with the opposition over asylum seeker policy.”

Just like handouts to Afganis, Indonesians, 17,000 boat illegals through 2012 – Gillard has put sport ahead of Australia’s own needy.  Single mothers have still lost critical child support so that Gillard Labor can save $173 million over the next four years.

This comes on the back of Gillard’s $1 billion cut to private health insurance rebates, hitting many underprivileged Australians, especially seniors.

Gillard is so out of touch with the desperate reality being experienced by ordinary Australians. 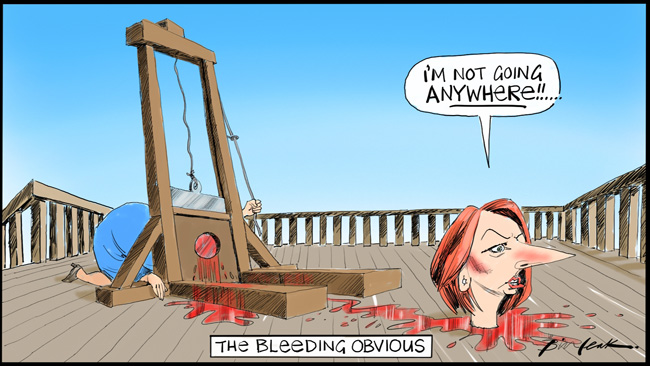