Yet another illegal migrant in Australia has been today charged with sexual assault.

It is a perfect reason why Manus Island is vital to protect Australian families from this foreign backward Slave Third World scourge.

Iranian, Omid Roshan, 21, whom the Labor Government released from detention into the Australian community on one of its bridging visas, has today been charged with abducting and raping a nine-year-old boy in Melbourne’s ethnic ghetto of Dandenong.

What background checks did ASIO carry out?  Any?

This is not just illegal invasion, but rape and paedophilia running amok in the Australia community.

Omid Roshan has been charged with abduction, two counts of rape and three counts of committing an indecent act with a child following the alleged incident in Melbourne’s southeastern suburbs earlier this month.

If found guilty, the scum needs to be auto-deported back to Iran, and never allowed re-entry to Australia.

The scum bastard was arrested by the NSW sexual crime squad in Sydney’s ethnic ghetto of Auburn last week after Victorian detectives learned that he had travelled interstate.

It is alleged Mr Roshan, who lived in Dandenong, asked the boy to get into his car in the neighbouring suburb of Doveton and then drove to nearby Eumemmerring before sexually assaulting him, then offering the boy $10 and demanding the boy say nothing.

Yet not a word of this crime is reported by migrant loving lefties at the ABC and Fairfax Media.  Both leftist media are fixated on lies told by a few deported illegals about their hands being burnt by Australia border security and re-runs of Manus Island detention facilities. 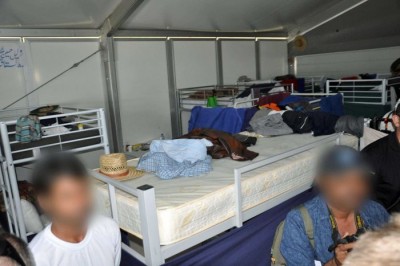 600,000 of Australia’s homeless could do with such generosity.