Australia’s clothing and footwear industries have been completely lost to the cheap Third World.  Our once proud automotive industry has shrunk to dependency on government handouts to maintain jobs in the short term, simply so LibLabs can avoid electoral backlash.  Yet neither faction has any long term viable manufacturing industry policy for Australia.

This week an Australian food manufacturing icon, Rosella, has been forced into receivership with over 270 jobs in Seven Hills, Dandenong and Auckland at risk.  After more than 100 years in operation, our legendary tomato sauce brand Rosella could either become foreign owned or disappear altogether.  No one told the employees about the company going into sudden receivership until they arrived at work – there needs to be a law against that. 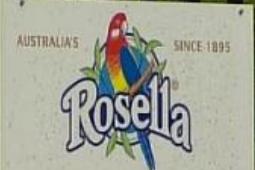 Appointed receiver, Ferrier Hodgson, was legally brought in by an undisclosed creditor using a court order, probably one of the big four banks, because Rosella’s debt had grown and shrinking profits could not service the debt repayments.  While the cause of the business failure has not been publicly disclosed, clearly Rosella has not been making sufficient revenue and profits to trade out of debt.

If it cannot charge fair prices to cover costs, any business becomes unviable.  At the same time, if its costs are already as lean as legally possible in Australia, then the business is condemned.

Just last August, Melbourne food manufacturer, Kerry Ingredients suddenly announced the closure of its factory at Altona, with the expected loss of more than 100 local jobs.   A ‘manufacturing review’ of its costs has seen management decide to shift all production offshore to the Third World of Asia Malaysia and China, so the business can compete with cheap imports.  It is a disturbing trend of both globalism and lowest common denominator ‘free trade’.

The month prior it was Australian confectionery icon, Darrell Lea, with 700 Australians to lose their jobs.  Darrell Lea is another local victim of the globalised economy, forced to compete on price with the massive economies of scale of foreign multinationals like Cadbury (Kraft) and Nestlé…on the mythological ‘level playing field’.

Last March, Victorian regional food manufacturer, Mars and Murray Goulburn, had to sack more than 100 workers.  The confectionery company shed 38 positions at its Ballarat plant and 64 jobs at its Murray Goulburn’s milk powder plant at Rochester, north of Bendigo.  Rochester has less than 2000 residents.

Other recent job sackings in food manufacturing have been at SPC in Shepparton, Heinz in Girgarre and National Foods in Campbellfield.  Australia’s once great brands, Arnotts and George Weston Foods Limited are now foreign owned.

Generations of Australian pioneers and hard-working European migrants were invited to build Australia’s agriculture particularly in the dedicate irrigated regions of the Riverina, Murray Goulburn.  Australia has built up a skilled workforce and self-sufficiency in quality food production with fully integrated industry from farm through to grocery shelf.

Then Whitlam and Fraser dismantled Australia’s tariff structure, opening us up to Third World cheap import dumping, multi-national takeovers, and duopolies and at the same time adding more cost pressures on local manufacturing.   Australia’s manufacturing is in crisis.  It is like watching our finest go over the top and be slaughtered by the enemy.

Australian wages and workplace standards were never ever going to be able to compete with a two bit waged Third World.  The free trade deception of a ‘level playing field’ is like a L. Ron Hubbard lure to recruit scientologists.  Talks of clever innovation, research and development can only do so much.   When labour is a prime cost of production what do you do with labour when Third World competitors pay wages of $2 a day?

The Gillard’s froth about Australia being the food bowl of Asia in the Asian Century is toxic and rotten.

So more high quality skilled Australian jobs have gone, to be replaced by cheap labour overseas.  This is free trade!  Free trade means that cheap labour is freely allowed to compete with Australian labour, which is incompatible if we wish to maintain Australian wages, workplace conditions and our Western Living Standards.

But under the LibLabs free trade liberalism all these 300,000 jobs are at risk.  So what is the future for Australian dairy brands such as Bega Cheese, Warrnambool Cheese, or Murray Goulburn?  Home grown Dick Smith Foods is struggling to remain viable as it tries to compete with Coles and Woolworths importing from China.

To safeguard Australia’s manufacturing wealth and to defend our fair and reasonable Western standards of work, and the jobs that underpin our vital regional communities, Australia must protect itself from Third World dumping and multinational competition.

We don’t have to feed the breeding billions of Asia.  In our national interest, we primarily need to feed ourselves and to maintain our own food security, like any other nation.  International trade (importing and exporting) is an economic bonus that comes after domestic food security.

But with no rules, only the foreign multi-nationals thrive and survive under ‘free trade’ economic rationalism.

Australia needs to reintroduce its import tariffs that made its strong economic and lifestyle and the envy of the world.  We need to rip up the plethora of foreign serving ‘free trade’ agreements (FTA).

Look at them all!

And the LibLabs are set to tighten more FTA screws on Aussie manufacturing with these under negotiation:

This is Manufacturing Death by a Thousand Free Trade Agreements!

NO!   Rip them up!  Save Australian Manufacturing! 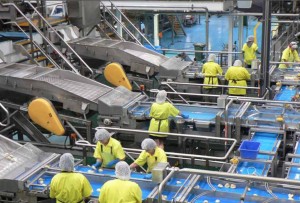 Thanks to the greedy likes of KPMG and PWC Outsourcing consultants spruiking the cost savings of outsourcing labour to cheap workers in Swaziland, China, France and Thailand and South America, Coles and Woolworths are throwing Australian food manufacturing workers on the scrap heap. 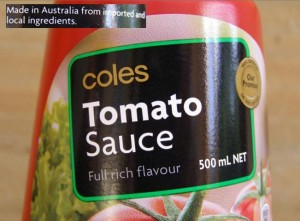 Despite the buy Australian marketing, both Coles and Woolworths have been caught out issuing global tenders to produce their home brand or “private label” products such as frozen berries, oils, rice, pasta sauces, canned spaghetti and tinned tuna, fruit and vegetables. One in every four grocery items sold here is a supermarket brand product.

“They just slap the retailers’ label on it and send it out to them.”

One in two of the Woolworths Select brand products is now imported, while Coles imports about a third of its own brand.    The power of the supermarket chain bullies is such that they will have the food manufacturers fill the exact same product into home brand containers and sell it as home brand, on the supermarket same shelf cheaper.

And the Coles/Woolies corporate retail bullies will cancel orders if a supplier complains or speaks out.

Coles and Woolworths with most of their respective home brands have copied the proprietary brands to a tee – same packaging shape, size,  colour, and design except with a different name and priced cheaper.  Like in the UK, homebrand copycat packaging has become rife in Australia, all intended to entice and mislead consumers.  Why they have not been convicted of patent and design infringement is a mystery, well paid dodgy patent attorneys and/or else political – LibLab parties are reliable election recipients of Wesfarmers and Woolworths political donations.

For a food manufacturer supplying to Coles or Woolworths, to think of suing their massive customer for patent or design infringement would be a case of biting off the hand that feds it.  Don’t expect any future sales orders. In fact expect to be permanently black listed.  Just ask De Bortoli wines, Greenseas tuna, McCormick spices, DickSmith Foods, and domestic meat and dairy producers.

If Woolworths and Coles are not a supermarket cartel, anti-competitive, engaging in exclusionary provisions, misusing their market power and exclusively dealing as buyers, then Julia Gillard is honest.

Coles and Woolworths don’t have marketing costs for their home brands, they just put the products on their shelves where they attract the highest sales.

Yet Australia’s national regulatory body, the disingenuously named Australian Competition and Consumer Commission, has done nothing.

The market dominance and bullying by Wesfarmers and Woolworths must end.   If we want to preserve the right to have goods Made in Australia we need anti-competitive protection legislation.  Industry self-regulation never works.  Australia’s Competition and Consumer Act needs a to be amended to mandate a maximum 30% market sector share by any corporation, akin to the anti-trust laws applied effectively across the United States.