Race riots are on the rise in Australia’s major cities because it is the outer urban areas that the ethnic ghettos have been allowed to grow and fester.  Urban Australian society has disintegrated and decultured since Whitlam’s naive 1972 multiculturalism manifesto.

Australia saw many race riots between the mid-19th and early 20th centuries when immigration was out of control, and the riots are back because immigration is out of control again.   In December 2005 roaming Arab gangs stirred up the infamous Cronulla Riots along Sydney’s beaches.   In September this year, 300 Arabs rioted in the centre of Sydney over a foreign issue nothing to do with Australia or Australians.

Early yesterday morning in ethnic concentrated south western Brisbane riot erupted between up to 150 young males resulting in one man driven over and murdered.

Australian police report that the riot spilled out from two parties in the south-western outer suburb of Woodridge in Station Road shortly after 10.30pm after news of the parties was widely circulated via mobile phones and Facebook.  Woodbridge is adjacent to the infamous Logan Ghetto which has attracted a high concentration of Pacific Islander immigrants.

Witnesses say the 21 year old driver deliberately run down a 17-year-old boy after his car was damaged in the riot.  Then the driver fled the scene.  The teenager has since died in hospital from his injuries and police have arrested the 21 year old, seize the car and charged the driver with murder. 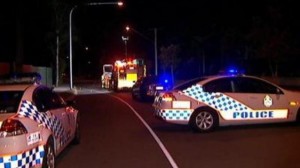 On the same day in ethnic south-western Sydney, a race riot blew up involving 30 African spectators at a soccer match- a Sudanese community football cup.  Initial reports indicated the fight was racially motivated.

The riot ensued from Van Hasselt Park where the match was being played in the outer suburban ethnic enclave of Willmot near Penrith.  The fighting involved Sudanese immigrants, both men and women from their late teens to early 20s.  The fighting spilled over into the street and continued for two kilometres along the length of Palmyra Avenue.

One man was stabbed in the back and four others were injured when a chisel, a spanner, a knife and a football corner flag were used in a brawl in Sydney’s west, police say.

Police were called about 4.30pm and established a crime scene stretching across the two kilometres, from Forrester Road, Lethbridge Park, to Van Diemen Avenue, Willmot. Three people were taken to Westmead Hospital and two to Nepean Hospital.

Officers arrested one man, but no one has been charged yet.  Police seized clothing and five cars for forensic examination.  Investigators arrested one man and five others were taken to hospital, three to Westmead and two to Nepean. One of those remains under police guard.

Chief Inspector Bill Pearce, from Mount Druitt local area command, said police were not certain what caused the riot.  “It’s something within the community,” he said. 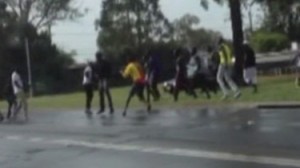 Only three months ago, a soccer riot occurred between fans at the Campbelltown Stadium in south-western Sydney in mid-August.  About 15-20 youths were embroiled during a pre-season game between Sydney FC and the Macarthur Rams soccer teams.

A man was taken by ambulance to hospital, and a six-year-old boy was grazed by a flying rock. 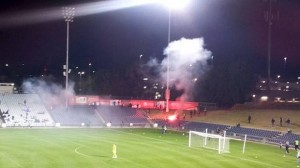 But the police can only do so much.  Why should our domestic police do the job of Immigration anyway?  This is a serious ethnic problem undermining our social fabric. Our national government has a duty to protect its citizens from criminals, from civil disorder and from invasion.  Our national government needs to remove the cause of this growing ethnic violence problem – put an end uncontrolled immigration, deport the offenders and abolish multiculturalism.

Fix our Criminal and Migration Laws

Within six months Australia’s urban crime rate would surely be back under control and our gaols almost empty.