This award is derived from the vernacular heritage of Australia’s pioneering peoples, who applied the term to those who betrayed fair dinkum values, or undertook what was considered un-Australian activities. The graphic symbol of the award, Bufo Marinus, [Cane Toad] should exemplify the character of any nominee – a terminal despoiler, necessitating complete removal from any influence in our Australian civilisation.
Nominations are restricted to individuals who are either Native Australian or European originating “New Australian”. Persons nominated should have excelled in the prevailing Traitor Class:- Globalists and internationalists working against the Great Cause of Australian Independence, and the European derived identity of the Australian Nation; bourgeois liberals; media sycophants; quisling politicians; warmongers; advocates for fake refugees; money changers who advance economics as the prime determinant in society; Australia-hating multicultists undermining our Aussie culture and heritage; destroyers of our Aborigine Races; degenerates and perverts to High Culture values; proponents of mass immigration and overpopulation chaos, exploiters pillaging the environment and adding
to the destruction of the ancient ecosystems of our Native Land.
Please forward the name and address of the person to be nominated, with full particulars, including references to supporting the nomination, by 30th December 2021, to the address below. Include your own name and address. 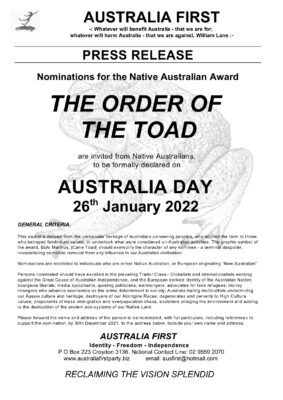