The Australian War Memorial website states that Vietnam Veterans Day is commemorated on 18 August every year.

The day was originally known as Long Tan Day, chosen to commemorate the men of D Company, 6RAR who fought in the Battle of Long Tân in 1966. On that day, 108 Australian and New Zealand soldiers fought a pitched battle against over 2,000 North Vietnamese and Việt Cộng troops about 5km from the 1st Australian Task Force (1 ATF) base at Núi Đất in and around a rubber plantation at Long Tân commune in Đất Đỏ District in then South Vietnam.

The Australians prevailed, but only after fighting in torrential rain for four hours. They were nearly overrun, but were saved by a timely ammunition resupply, accurate artillery fire from the nearby Australian base, and the arrival of reinforcements by armoured personnel carrier. Eighteen Australians lost their lives and 24 were wounded, the largest number of casualties in one operation since the Australian task force had arrived a few months earlier. After the battle the bodies of 245 enemy soldiers were found, but there was evidence that many more bodies had been carried away.

6RAR/NZ (ANZAC) Battalion mounted ‘Operation Long Tân’ on 18 Aug 1969.  A nine foot unpainted concrete cross was helicoptered in and planted in the position that 11 Platoon had defended for most of the battle.  The cross was constructed in reinforced concrete with scarring marks by a New Zealander and a brass plaque at the centre of the cross bearing the following inscription:

Neil Rankin was the platoon sergeant of 10 Platoon, D Company, 6RAR in 1966, and he fought in the Battle of Long Tân. He returned to Vietnam with 6RAR/NZ (ANZAC), and on 18 August 1969 he was sent out to the rubber plantation in an armoured personnel carrier, charged with finding the right site for the cross.

“The site that I was looking for was not D Company’s position, but a certain location where the second contact took place,” he said. “That position was 11 Platoon’s, one of the three platoons that took part in the battle. This platoon, under the command of Gordon Sharp and Bob Buick, not only had the first and second contacts with the enemy, but repelled attack after attack [against] machine-guns of 50 calibre which were zeroed at ground level. This was the platoon that took the most casualties. Out of a strength of 28, 13 were killed and eight wounded. This to me was the site on which the cross had to be erected.”

Rankin had a special attachment to these men: he had trained them prior to the battle, and also knew the families of most of them. After some searching, he found the site of their last stand.

“The rubber trees bore the scars of small arms and heavy machine-gun fire. With the heel of my boot I marked the site where the cross was to be erected.”

The cross weighed 120kg and so was flown in by Huey. 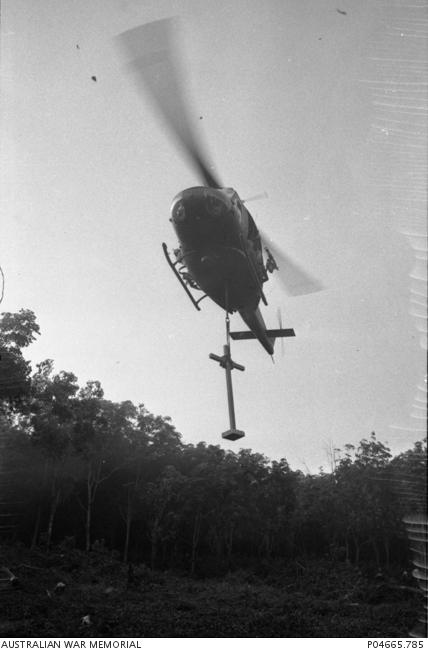 The plaque faced south (as does the replica at the site today). 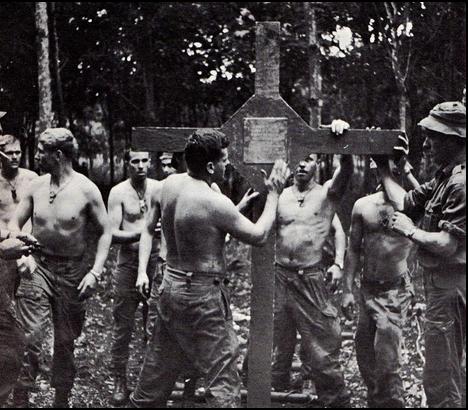 The first memorial dedication service was then held on the site of the Battle of Long Tân on 18 August 1969 by members of 6RAR/NZ (ANZAC) to honour the fallen soldiers of 6RAR from both deployments to Vietnam. Veterans of the Battle of Long Tân lined either side of the cross while the remainder of the battalion are assembled under the surrounding rubber trees.  The entire battalion of 6RAR/NZ (ANZAC) were assembled for the dedication ceremony led by a chaplain. Standing on either side of the cross, flanked by two pipers, were ten soldiers who fought at Long Tân in 1966. 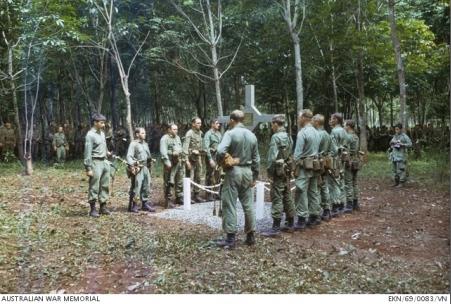 The day was commemorated by them as Long Tân Day from then on. Over time, all Vietnam veterans adopted the day as one to commemorate those who served and died in Vietnam.

Lieutenant Colonel Len Johnson was the last Australian soldier to see it in that place.  “I was the last to leave in an APC with the ramp down. My last sight was a lonely cross standing abandoned in the sunlight in an opening among the rubber trees. My last, sad thought was ‘tonight the Vietcong will blow it up’.” 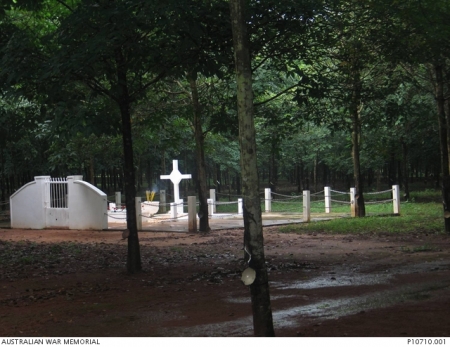 In the years after the communist victory in 1975, the cross was removed and “recycled” by local people as a memorial for a deceased Catholic parish priest, Nguyễn Văn Chính, whose name was engraved on the cross when they erected it over his grave.

In 1984, the cross was recovered and acquired by the Đồng Nai Museum in Biên Hòa city, where it was displayed with other relics from the Vietnam War. In the meantime, in 1989 the Long Đất District People’s Committee erected a replica cross on the site in the Long Tân rubber plantation.

In 2016 the Vietnamese government banned Australian access to the Long Tân battle site, which had become an annual pilgrimage for many. 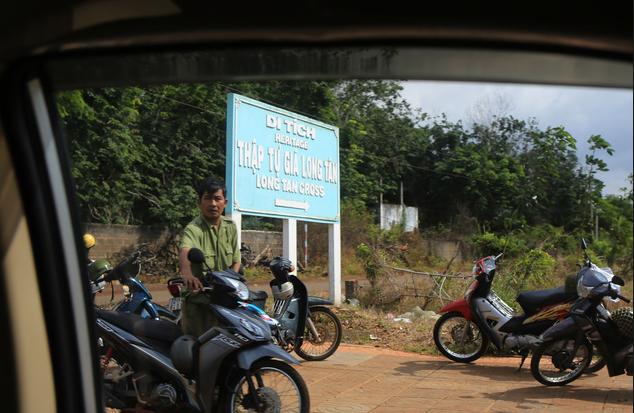 Peter Dinham AM, a lieutenant with A company 6RAR, had been part of a re-enforcement group sent in to support D company. 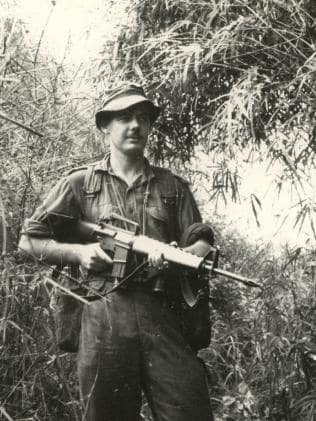 In the 1990s, Dinham began his campaign with other Vietnam veterans to try to convince the Vietnamese government to give the cross to Australia in the early 1990s, when he was still with the Australian Defence Force as a colonel and chief of personnel.

Discussions about bringing the cross to Australia permanently began after the 2016 controversial decision by the Vietnamese government to ban access to the site for Australians wanting to visit the site for the annual commemoration.

In a secret operation in late 2017, the Long Tân Cross, being one of Australia’s most important war remembrance symbols was handed over by the Đồng Nai Province People’s Committee to Australia’s Ambassador to Vietnam Craig Chittick at a small ceremony at the Dong Nai Museum in Biên Hòa.

Around October 25 2017, two weeks before PM Malcolm Turnbull was due to fly to the 2017 APEC meeting in ­Da Nang, the Australian embassy in Hanoi received an unexpected approach from a Vietnamese ­official.  Ambassador Craig Chittick was told Hanoi wanted to hand over a monument from the Vietnam War — one of only two ­memorials to foreign forces that have been officially allowed in Vietnam. The government official wanted to know if Mr Chittick would accept it. If so, it would have to be done quickly. Such were sensitivities around the item they also wanted it done quietly.

A condition of the goodwill gesture following months of quiet negotiations, was that there not be any publicity around the handover due to long-held sensitivities in Vietnam over the annual commemoration of the 1966 battle.

And so began an operation to repatriate the Long Tân Cross, a shrine first hammered into the red dirt of a rubber plantation in South Vietnam almost 50 years ago to honour the 18 Australian soldiers of Delta company 6RAR killed during the now infamous and bloody battle.

Australia arranged the cross to be secretly transported from Saigon to Canberra with a military ­escort and secretly stored in a Canberra warehouse.

On Tuesday December 5, the original Long Tân Cross was officially unveiled at the Australian War Memorial.  It was closure for Peter Dinham’s 20-year personal campaign to repatriate the cross, which has become a beacon for all retired Vietnam veterans.

“We are very thankful to the Vietnamese authorities,” he said yesterday. “It must have been a traumatic thing for the Vietnamese … they didn’t want to do it … so good on them. For us it will form some sort of closure.” 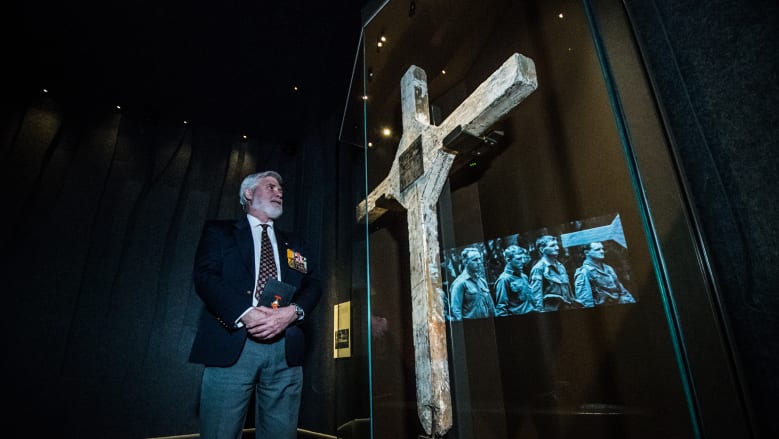 Read About the Vietnam Veterans Association of Australia

The Long Tân Cross – commemorating the 18 killed and 24 injured during what’s considered to be Australia’s most costly engagement in Vietnam.  Approximately 60,000 Australian men and women served in the Vietnam War between 1962 and 1975, including 521 who lost their lives and 3129 wounded.  For many Australians and New Zealanders, the Long Tân Cross has come to symbolise our involvement in the Vietnam War. It is a powerful memorial to the service and suffering of Australian soldiers.

The cross is now home. 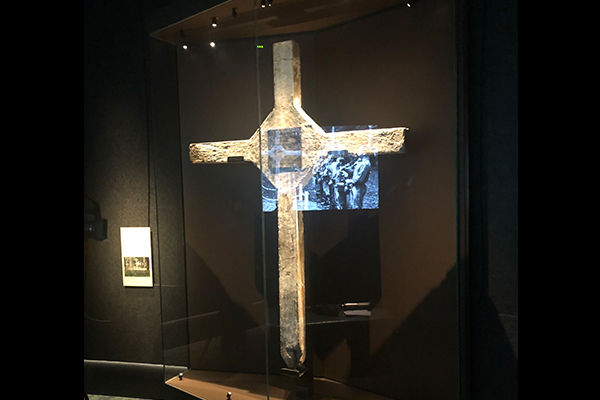 ← Turncoat’s climate cult guarantee might save 26 per cent of Australia’s 0.01 per cent of bugger all
Set to do a Peter Costello →