Few statistics in the game correlate as closely with the top of the AFL ladder as does the number of average goal kickers per side. Hawthorn, Port Adelaide and Sydney are the top three teams on the chart.

But what’s just as notable is Collingwood’s lowly ranking of 15th, better only than Melbourne and bottom-eight sides Brisbane Lions and St Kilda. 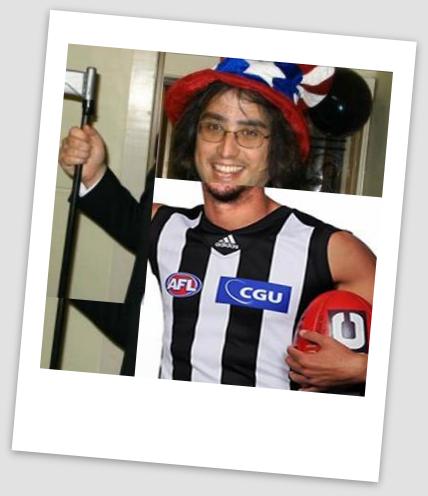 Whereas Hutchings has form as an online anarchist
(Doesn’t exercise much).

In 2005, lead forward in anarchism theorising, James Hutchings was in his blog kicking prime: 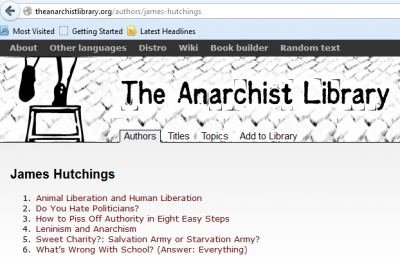 Title: How to Piss Off Authority in Eight Easy Steps
Author:   James Hutchings

According to one James Hutchings:

“Are you unhappy with your life? Do you hate being pushed around by parents, teachers, perhaps the church, perhaps the boss at your shitty four dollars an hour job at Macdonald’s? Our society isn’t exactly kind to young people — bossed around by everyone, in a lot of cases we’re the victims of out and out abuse. In the Northern Territory, the government was considering forcing people under 18 to wear identity bracelets at night. In Queensland they can put teenagers in shackles for court appearances. And when you get the ‘freedom’ of adulthood, it turns to ashes in your mouth: parents and teachers are replaced by bosses (or case managers if you’re unemployed). Sexual harassment and racism don’t go away. Our parents are just as helpless and frustrated as we are. If none of this bothers you, please don’t keep reading. If it does, then you’re not alone (even though you probably often feel like you are). In fact, most teenagers would probably like to replace this society with a better one. However, most teenagers are also letting their anger out in a way that won’t do anything. If you’re interested in how and why, please read on.
Television — the Drug of a Nation (not to mention radio stations, magazines, newspapers…)

If you’re young, you’ll know how the media can distort things. If you believed the TV, you’d think that all teenagers are bludgers, heroin addicts, and all sorts of other condescending bullshit. But media stereotyping isn’t limited to programs like A Current Affair. There’s no group that’s lied about more than anarchists. The very people who get upset about stereotyping of, say, the metal scene, will often then turn around and tell you that all anarchists are drug-addled nutcases with a beer in one hand and a molotov cocktail in the other. I can’t stop you doing the same thing. If you want to believe what the mass media tell you, that anarchists are half terrorists and half crusty fashion rebels, then you do that. But next time someone stereotypes you for having the wrong hair or an earring in the wrong place, don’t complain, and don’t think you’re any better or more open-minded than they are. (For those who are fairly open-minded, anarchism means believing in direct democracy ie no government, sharing the wealth, and equality. You don’t have to be into drugs, music or fashion to believe this, though we think that everyone should be free to take whatever drugs, listen to whatever music, and wear whatever they choose. It also has nothing to do with chaos and destruction, except the destruction of authority. If anyone tries to tell you otherwise, you now know more about it than they do).

Punk, from anarchism to those pompous old men the Sex Pistols.
If you’ve heard of anarchism already, it’s likely to have been through punk. Punk has always had an anarchist presence: from Crass to the Dead Kennedys (and Jello Biafra’s solo albums) to Propagandhi today. The D.I.Y. ethic, of having self-sufficient local scenes instead of passively consuming what record companies have to offer, is taken from anarchism. However, the punk scene isn’t as good as it should be (or as good as people sometimes make it out to be). Punk is meant to be a way of fighting back. But, like a lot of rebellion, it can turn into a way of running away.

We Believe in Freedom — Here’s Your Uniform.

The point of punk is meant to be the anger. That and doing something about it. This is the difference between, say, Smash Hits and anarchist punk zines like Maximum Rock ‘n’ Roll. Or why Jello Biafra does spoken word albums and the Spice Girls don’t. However, punk can be used as just another fashion. It can be a little in-group, where having the right hair is more important than having the right ideas. Some people will make fun of people for dividing on the basis of what football team you support, and then turn around and be worse on the grounds of what bands you like. A lot of people see punk attitude as just ‘fucking shit up’, which is exactly the opposite of anarchism. If you really want to just wreck things, you’d be better to go and join the government. This is a general problem with subcultures. Most of them have some pretty good points — the gothic and metal scenes can be very anti-religious, punk is often pretty anti-authority, and so on. But, it isn’t enough. Some people act as if everything will be OK if you wear the uniform, support local bands and boycott Macdonald’s. Which is bullshit. If you really hate being at the bottom of the heap in this horrible world, then you should do something about it — not try and escape and forget, because you can’t. The powers that be won’t let you.

Rage In Favour of the Machine.

Living your life based on what bands you’re into is one of the most un-rebellious things you can do. As long as the people at the bottom of the pile express their anger by dividing instead of by uniting, the people at the top will be safe. It doesn’t matter whether you listen to Brujeria or Tina Arena, you’re getting screwed by the system either way. You listen to music because you enjoy it. It can give you ideas, but by itself it isn’t going to change anything.

And the corporations will do all they can to make sure music gives you bad ideas. Whenever any kind of rebellious movement comes along, the powers that be will try and take it over. Yesterday’s rebels can easily become today’s bosses. And turning something into a scene, with its own music, fashion etc, makes that all the easier. They can simply copy all those things, and leave out the political meaning. How many ‘punk’ bands just sing about love and are on major labels? The ex-members of the Sex Pistols don’t seem to be giving away their millions, despite singing about ‘Anarchy in the UK’. Exactly the same thing happened in the ’60s: there were a lot of really good ideas around, like the early feminists and the Black Panthers. But all we really get to hear about are Martin Luther King and smoking pot. The mass media is owned by a few very rich men. And they aren’t going to let people get hold of anything that really threatens their power. As Phil Spector (a record producer) said, “I dictate to the kids what I want them to hear and what I want them to buy. They’ll buy what I put out there.” This is true whether the music is mainstream or alternative (which is getting more mainstream every day). There’s nothing sadder than seeing people expressing their anger by buying CDs and t-shirts from the very rich bastards who make life miserable in the first place.

We Fought the Law and — We Won.

There’s no point criticising unless you can offer something better. Which I think I can. I won’t try and bullshit you — anarchism is a pretty small movement in Australia. But it’s equally obvious that we’re growing. You might have heard about the recent speaking tour of Lorenzo Ervin, the ex-Black Panther who our government arrested, bashed, called a terrorist and tried to deport. We wouldn’t have been able to do a tour which 1000 people came to, in the face of persecution by the government and Pauline stupid Hanson. The reasons why we’ve been quiet for the last few decades are important, but not that relevant to this article. For now, it’s enough to know that we’re waking up from a long sleep, where other movements seem to be stagnating or even getting smaller.

No one expects you to go out and start a revolution all by yourself. At best, young people face a life slightly worse than their parents — a bit more frustration, a bit more anger, a little less pay. At worst, the environment might completely fall apart thanks to the greed of the rich. If you want more than this, if you’re feeling frustrated or angry, and very importantly if you’re prepared to express it in a way that will actually do something, then you should join an anarchist group. You might already know where to contact one. If not, you can get in touch with me — email (jameshutchings@hotmail.com), or write to me c/o Angry People (my group), PO Box 108, St Peters NSW 2033. I answer every letter and every question I get.” 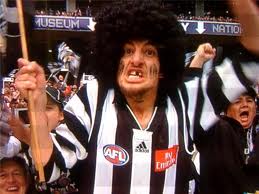