Last year Packer while intoxicated and abusive, refused to leave the licensed Crystal Bar in Martin Place around 1 am on Saturday November 23, 2013.  Outside the venue Packer then repeatedly punched a Summer Hill man (22) unconscious then stomped on the victim’s head inflicting a fractured eye socket and two fractured bones.

Today the Magistrate Greg Grogan of the Downing Centre Local Court in Sydney said Packer’s behaviour was cowardly and deplorable, and has sentenced Packer to two years’ gaol.

Packer has form.  Last June Packer was fined $15,000 for urinating in his shorts during an NRL match at Suncorp Stadium in Brisbane. 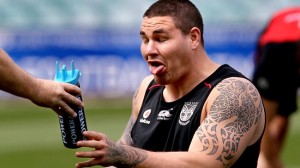 Packer is a criminal convicted of a serious violent offence.  He rightly deserves gaol time.

Australians have standards for immigrants arriving on trust and we’ve had a gut full of immigrants abusing that trust.

Ethnic thugs are unwelcome in Australia.  Get the message!

Packer must serve out his imposed sentence in commensurate custody there.

A lifetime ban on re-entry to Australia must also be imposed on Packer.

The associated legal costs of the trial also need to be recompensed by the New Zealand Government to the Australian Government, since it is one of New Zealand’s own that has caused these costs.

Russell Packer is an antisocial alcoholic and now a convicted criminal.

He is unwanted in Australia.  Piss him off.