Members of the Australia First Party and some other Australian patriotic people joined with supporters of the Golden Dawn party drawn from Australia’s Hellenic heritage community – to picket the Consulate General of Greece in Sydney. 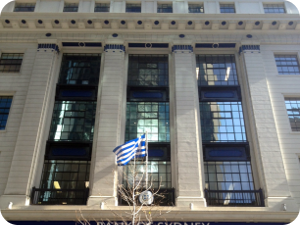 Golden Dawn’s demand is that the Greek state free six imprisoned Golden Dawn members of parliament. A leaflet was handed out to passers-by.

We reproduce the text:

Greece is a democracy – but it has political prisoners.

Six Golden Dawn party members of the Greek parliament, including party leader N. Michaloliakos, have been imprisoned without bail on charges that they are running a “criminal association”.

The other 12 Golden Dawn MP’s may also be locked up soon – for the same reason. The Greek constitution won’t allow the banning of a party, so the Greek politicians want to proclaim the party a “criminal organisation” instead.

Perhaps over twenty per cent of Greeks will vote for Golden Dawn in the May elections. The Greek government has tried to produce evidence against the Golden Dawn, but has nothing.

So it delays the court dates and writes propaganda without proof. Greek politicians have been selling off the country’s assets for to pay the fraudulent “loans” provided by the International Monetary Fund, Social security has been cut reducing pensions and the dole. The government lets in masses of immigrants to work as cheap labour. It has sold off Greek industries. Greek politicians have salted away billions of dollars in Swiss bank accounts rather than pay their share. They are the criminals.

Our demonstration today is just one organized in many countries.

We demand the release of the Golden Dawn prisoners! The experience of Golden Dawn has shown to politically aware Australians generally – and to all patriotic people in particular – a great truth. This truth arises from Golden Dawn’s successes to date.

It is clear that Golden Dawn has demonstrated both an electoral power and a community power. The party may now hold over twenty per cent of the votes and it is active in every area of Greek society from the army and the police, to the pensioners and the unemployed.

It has threatened to break further ground in becoming a truly mass movement which will ‘take political power’ in the next few years. Golden Dawn would then break Greece from the New World Order regime.

No wonder then that the New World Order regime of the international bankers and the multinationals has panicked and demanded that the local Greek branch of its global power (the Greek government)  – take action against Golden Dawn. The thieves and the traitors will violate their own laws and commit any crime to destroy the Golden Dawn.

It is in the matter of ‘take political power’ that the great truth of Golden Dawn rests.

What does that mean? We say it lies in the way that Golden Dawn considers the very nature of political power.

Golden Dawn appreciates that there is no such thing as a pure democracy where ‘votes’ and ‘opinion’ determine outcomes.

Democracy is a system and it is owned by someone and it is not to be shared. It is also much more than parliaments and ‘parties’ and it cannot be brought to the heel of the people’s will by election campaigns and media friendly public debates.

It is a system of patronage and universal deception.

This month, the Greek Ambassador to Australia, Haris Dafaranos, accompanied by the Consul General of Sydney, Counselor Dr. Stavros Kyrimis, met in Sydney with the President of New South Wales’ Parliament, Shelley Hancock and the President of the Senate of NSW, Don Harwin. They discussed recognition of three historic genocides (Armenian, Assyrian and Pontus) yet at the same time continue to turn a blind eye to Greek nationals held illegally as politican prisoners in their own country.

These Greek aristocrats are out of touch with Greek sentiment.  As representatives of the Greek government, they are complicit in breaching Greece’s democratic constitution, hypocrites, and unworthy of their office.

Golden Dawn knew that it had to organize in a special way in order to win over the New World Order system in Greece with its so-called democracy.  Golden Dawn has had to function from deep within Greek society to challenge the state itself for power. The leader of Golden Dawn, Nikolaos Michaloliakos, set out at the start to develop a different sort of party to the bland ‘electoral parties’ favoured by so many in the Australian patriotic scene.

He understood in his own nationally-specific way that the party had to be structured according to the three tier method.  It would wage electoral struggle; it would wage a community engagement plan and operate directly at street level with the people; it would defend at every point the cultural heritage of Greece and it would employ the politics of cultural defence in its struggle to develop a new ideology that answered the needs of the Greeks.

Certainly, the Greek money class and its government intended that even if Golden Dawn was to win a ‘majority’ of the parliamentary seats, it would not be permitted to govern. In that case it would be the subject of force. In other words, the masters of money showed that the real power does not lie in parliament because parliament is but one institution of the state.

Yet, it does not intend that Golden Dawn even gets to that point if it can be disrupted and contained well ahead of events. Hence, the Golden Dawn since last September has been the subject of raids, false imprisonments, media campaigns of disinformation – and the assassination of two of its young activists by extreme-left terrorists who may have secret links to the state.

Golden Dawn was not deceived that power can be theirs easily and within any parliamentary structure, so the party was prepared psychologically for the Greek state’s attack.

But more immediately – the party did not break under sustained attack and it has continued to grow. And so, the Golden Dawn is a challenge to those who have enslaved Greece to the New World Order banks and multinationals. 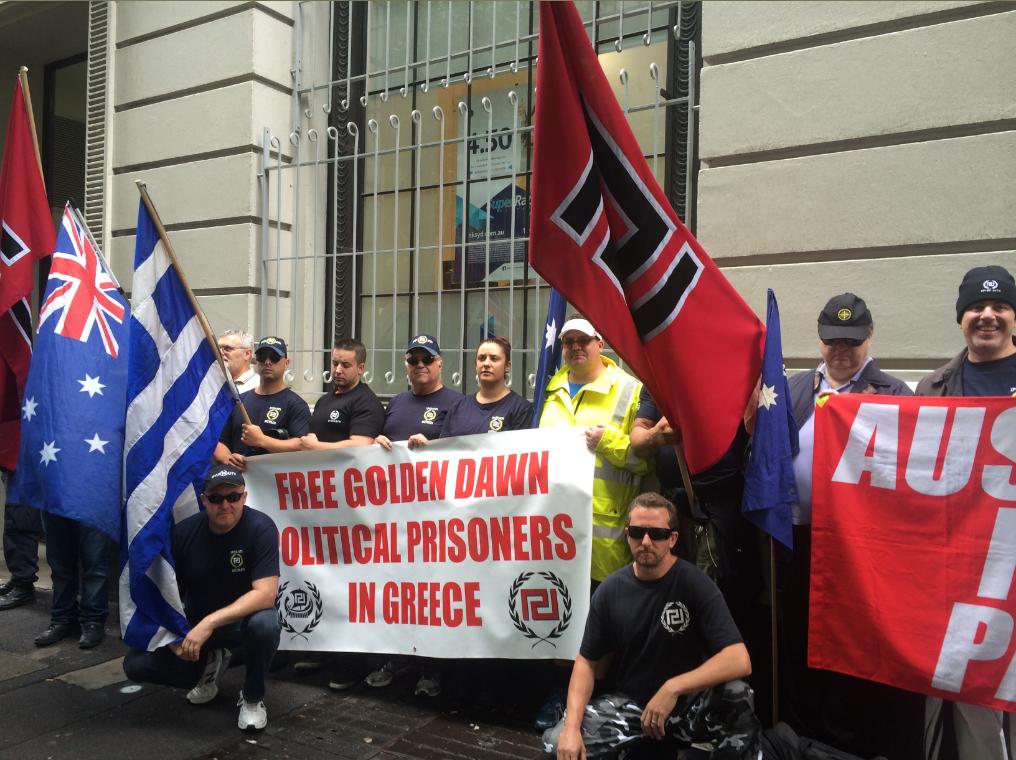 It is now on the edge of a major electoral breakthrough which will flow over into a political earthquake when the imprisoned leadership of the party are released from prison under mass pressure and the sheer absence of criminal evidence.

The struggle for state power can then commence. And so, if we Australians perceive that were we to go down the same three tier path, with the developing conditions of economic decay now slowly becoming evident – we too will become a significant electoral and community movement and thence into a mass movement.

“Our party must support the efforts across many countries to highlight the political imprisonments of Golden Dawn parliamentarians in Greece and to offer whatever support we can to Golden Dawn.

Our party is a brother party to the Golden Dawn even if at a lower level of development. We exist in a common period of crisis for a civilisation and the people who sustain it. We are challenged by a New World Order system that pillages our countries and threatens an entire race with a type of genocide by replacement.

This is the power game of all games. We are convinced that Golden Dawn will ultimately be victorious in Greece and draw a positive inspiration for our struggle.” 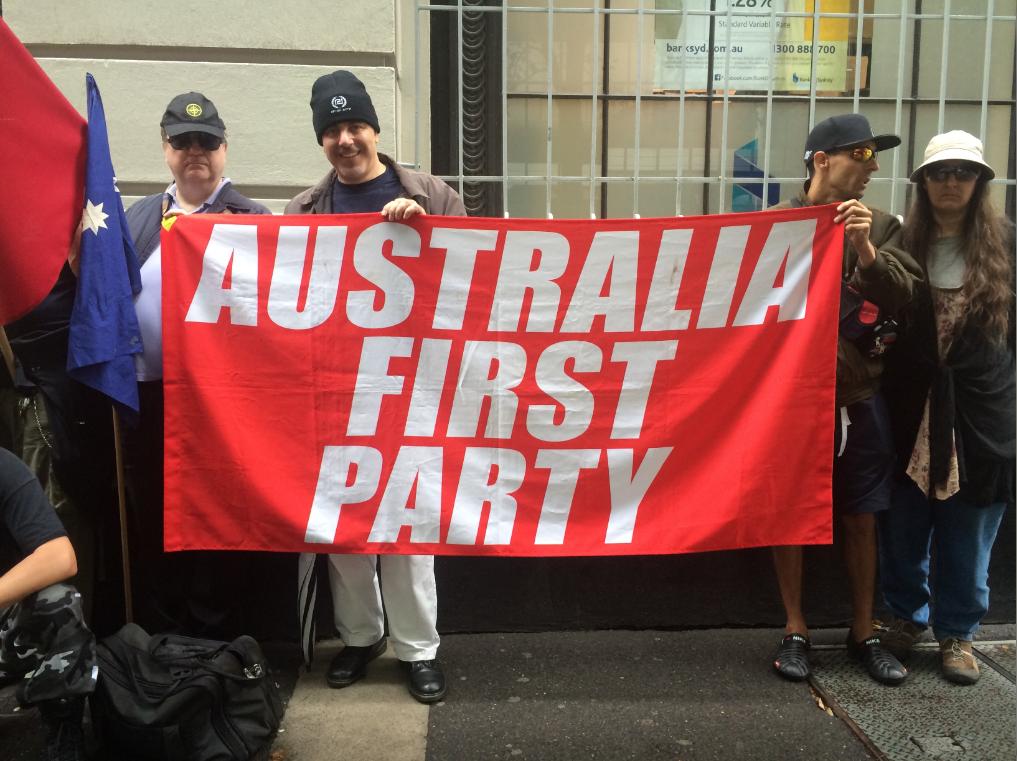