Want to feel the rath of Islamic extreme prejudice?

No need to pilgrimage to Mecca or Yemen, just drive out to western Sydney.

Last week reported in Sydney’s Sunday Telegraph April 07, 2013, mourners at the Auburn Gallipoli Mosque were told they were “not welcome” by an Islamic cleric at a former policeman’s funeral because they were non-Muslims.

The family of Erdinc Ozen, a former police officer and member of the Australian Navy Reserves, are demanding an apology following the incident  last month.

Mr Ozen, a Turkish-born Australian who served as a policeman until 2011, died from a brain aneurysm last month.

His brother Tunc said a number of senior police and friends from his fishing club at the Seven Hills-Toongabbie RSL left the service after the unexpected directive from acting president Dr Abdurrahman Asaroglu. Others attending included an 87-year-old World War II veteran and former NSW premier Nathan Rees.

“He told everyone it’s a Muslim prayer service, all women and non-Muslims were not welcome and they had to leave the mosque area,” Tunc Ozen said.

“All of his friends were not Muslim, so they had to leave – it was a big shock. It upset a lot of people.”

Most hurtful for his family was that when it came time to move Erdinc’s coffin, his closest friends were not allowed to take part in the proceedings.

“These complete strangers were grabbing my brother’s coffin, not his mates, as a result of what this bloke had said,” Mr Ozen said.

Mr Ozen has written to the mosque and Turkish consulate demanding an apology.

“He didn’t raise any of this with us. There were plenty of opportunities,” he said.

“I’ve spent as much time thanking people for coming as I have apologising to them over what happened.” 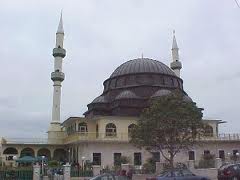 Auburn Mosque in ethnic western Sydney – a blight on Australia
The grotesque building should never have been permitted.  It should be condemned and boarded up.

In May 2012, Sheikh Feiz Mohammad, a Muslim preacher decended from the Middle East who has decided to impose foreign anti-Australian dogma in Australia, launched an extraordinary attack on Rugby League, calling it the devil’s game. 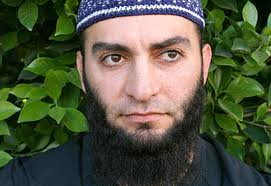 Australians have had a gut full of foreigners coming to Australia and telling us what we can and can’t do.  Their offspring are no better rejecting Australian way of life.  This is the consequence of Whitlam’s naive myth of multiculturalism.

Simple message for Islamic extremists like Muhammed and any other nutters with bigoted ideas about Australian culture and way of life, if you don’t like us and don’t like our laws, leave Australia. Go back to whence you came and to barbaric cultures to which you aspire! You are not welcome in Australia!

Anti-Australians are not welcome in Australia!

Sharia is not welcome in Australia!

Australia is for Australians