Witnesses along footpaths in Melbourne’s CBD on Friday recount a crazed hoon of Middle Eastern appearance, Dimitrious Gargasoulas (26), doing multiple doughnuts in an old maroon Commodore in the intersection of Swanson and Flinders Streets, while foot police passively watched on like unprepared traffic wardens in shock.

The disturbing antics were all captured on smartphones.

The ICE-addicted ethnic lurched out the drivers window shouting to draw attention.

While the maroon Commodore was doing its many doughnuts in the Flinders Street Swanson Street intersection, some brave pedestrians tried approaching the car to get at the crazed ethnic driver. One even had a baseball bat – vital self-defence in Apex Melbourne these days. 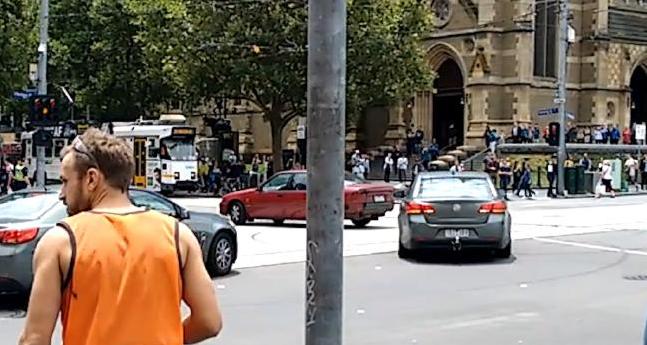 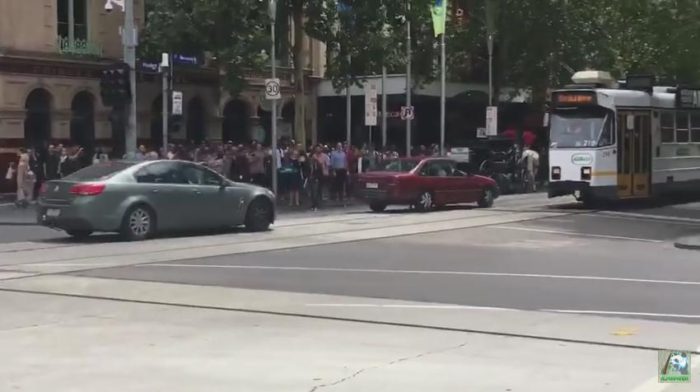 A bad decision that would worsen the situation

A pedestrian can be heard asking “Where are the coppers?.. you’re kidding me”

After which we learn that the driver turned desperately into Burke Street Mall along the footpath accelerating his escape into random pedestrians.

Record the above footage because culpable Victoria Police senior management are soon to delete it to preserve there slimy skins.

Police culpable for not containing the obvious psychotic situation in Flinders Street or what? 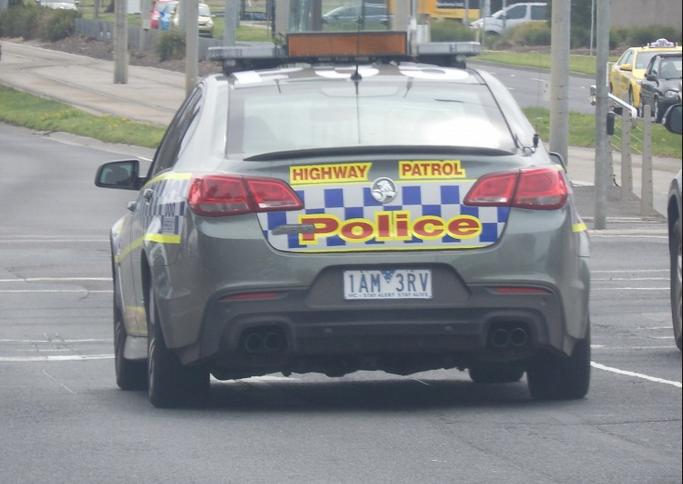 The effect was a copy cat Nice and a copy cat Berlin.  One witness even recorded the driver yelling out “Alluha Akba“. Not terrorism-related?

Yet the politicians excuse the terror as only “criminal”.  Is not a killer using a car along a footpath to murder pedestrians, an act of terror?

What does it take?

Killer Had Been Released on Bail

Damn the bail justice who let Dimitrious Gargasoulas loose on the community after being charged with attempted murder of his brother Angelo in a stabbing frenzy with a kitchen knife at 2am the previous Friday, punching his mother’s partner, Gavin Wilson (76) and throwing a burning bible at him, before stealing Mr Wilson’s car, and despite being a known serial drug addict and violent offender. 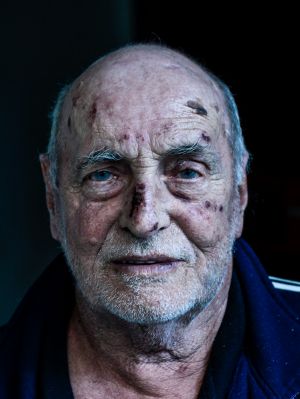 Following the stabbing attack on his brother, Dimitrious Gargasoulas high on ICE, kidnapped his African girlfriend Akiir Muo in Wilsons maroon Commodore eventually dumped her on the Bolte Bridge when police were following him. 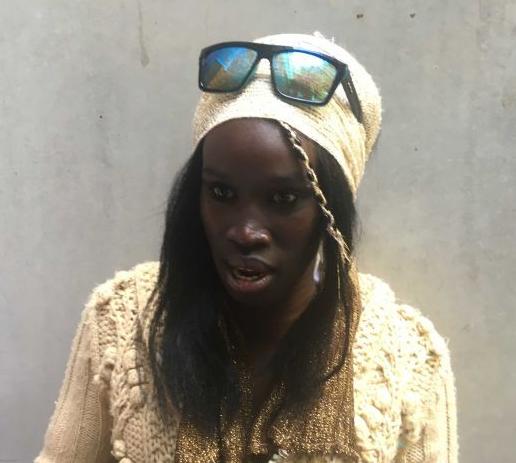 “I remember the last words that he told me. ‘I’m gonna go to the city and I will run a lot of people down’. “He was saying something about the comets is coming or it’s like the end of the world and saying he is the saviour or he’s God – all this crappy stuff.”

Police chose not to intercept him on the bridge when he pulled over.

And so who was the reckless magistrate responsible in the Magistrates’ Court of Victoria.  Was it Drug Court Magistrate Anthony Parsons or Chief Magistrate Peter Lauritsen?  It will transpire in due course.

Dimitrious Gargasoulas also had a psychotic online rants on his Facebook page, claiming to be “greek islamic kurdish” – that is, just another Islamic Arab. 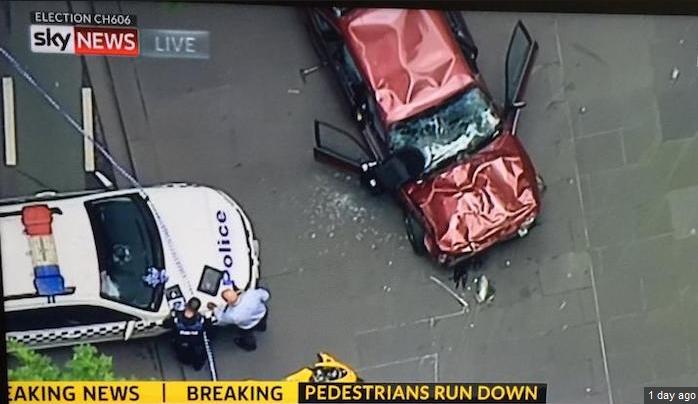 In Sydney, the Lindt Café islamic terrorist Man Haron Monis had previously been formerly charged with an accessory to murdering his ex-wife (found stabbed 17 times) yet was given bail by Magistrate William Pierce at Penrith Local Court.  Politically correct senior police at the time wrongly described the siege and murder not as an act of terror but as “criminal”, despite all the obvious signs.

Now in Melbourne, a 10-year-old child is among three people murdered by car. Three are dead and twenty maimed, many critically, many permanently.

One witness reported he saw the car travelling along the footpath.

‘It was a maroon Commodore travelling easily 70km/hr on the footpath. We heard thumps and there was people flying everywhere.”

Victoria Police confess they knew the driver was involved in a stabbing in inner-city Windsor in the early hours of this morning.

“What we do know of the person is there is an extensive family violence history involved. He has come to our attention on many occasions in the past and we have mental health and drug-related issues in the background of this particular person. He has been coming to our attention more recently over recent days in relation to assaults, family violence-related assaults.  He was involved in a hostage situation on the other side of town where a woman escaped from the car on the inner-west Bolte Bridge.”

If it was Israel, the terrorist would be dead by unloaded lead, not castigated by corporal punishment to his right arm.

Yet Graham Ashton‘s passive policing allowed the ICE-fueled ethnic, one well-known to Victoria Police, rampage Melbourne’s CBD and deliberately mow down pedestrians with his car with impunity. And Premier Daniel Andrews yet again plays down the crime proclaiming it not to be and act of terrorism – somehow because no registered terrorist group phoned in afterwards confessing “yep it was us”.

As if?   When is an act of terrorism official then?  Well like unemployment statistics, the government has its own narrow definition to suit its propaganda. Does terrorism have to have to be by a registered group, despite random citizens being wantonly murdered and passersby terrorised and traumatised? Pardoning criminals sux.  Victoria Police under Graham Ashton’s Circus are either complicit in the ethnic gang crime, else incompetent at dealing with it.

Melburnians are unsafe in the wake of ethnic invasion.  It’s time to either side-arm up, or leave Melbourne or else passively hide in your homes.

We expect some leftist lawyer to defend the mass murderer and plead some excuse for reduced sentence, and the leftist judges to oblige.

Why did Victoria Police, with the background intelligence that has, not trigger counter-terrorism response starting with 101 containment of the nutter to the doughnuting intersection of Flinders and Swanson Streets – and bloody ram the Commodore clear of onlookers?

Such decisive policing would have averted the terrorist in the maroon Commodore from exiting the crime zone and from being allowed to drive to Bourke Street Mall.

Ashton’s PC passive cops will never live this one down.  They ought sack themselves. 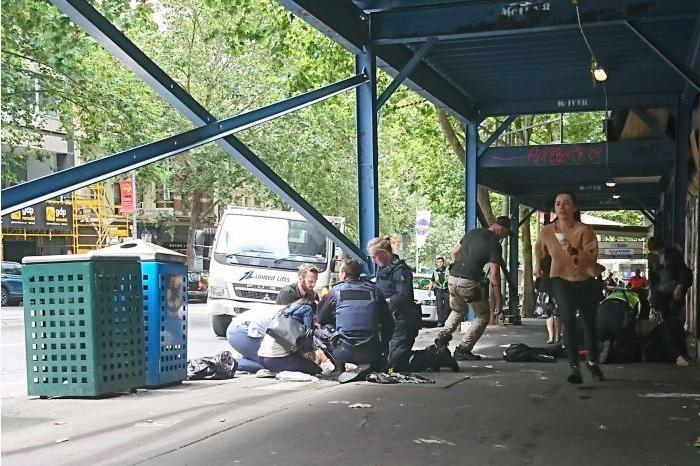 People in Australian cities can no longer feel safe going about their ordinary business.

..But as predictable as bureaucracy runs for cover, here comes the government’s paltry excuses, the kneejerk law tweak, the spin enquiry…before the mental state bullshit defence, the plea bargaining, the reduced sentence…all till next time.