We told you Frankenstein was running Spring Street.  Union-installed Premier Daniel Andrews’ is about social re-engineering.  Think Leftie Cultural Marxism – welfarism, borderless Third World migration to the West, national debt until bankruptcy, decriminalisations, social liberalisation, globalism and Agenda 21.  He’s even been to China to get lessons. 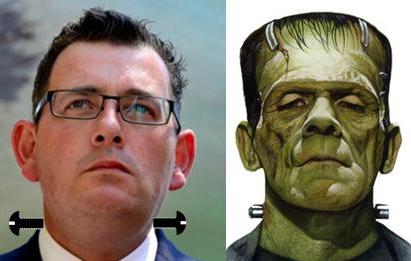 His first action was to shred $1.1 billion of Victorian wealth by caving into the Socialist Party and scrapping the East West Link.   $1.1 billion could have delivered a new major hospital to Melbourne.  After Labor’s Climate Change alarmism under Brumby, Victorians are already forking out $600 million a year not to take water from the desal plant, while Melbourne’s reservoirs are 60% full ahead of a forecast rainy winter.

Then there’s the $207 million on window dressing consultants and Dan’s drama coach.  His dalliance in China There’s the $250 million on a disused mine in Stawell to investigate CFMEU ‘Black Matter’ and $58 million on a penguin-led cute recovery.   More than making up for all the above is his $1.6 billion elevated Dandenong Railway Corridor to drive a noise knife through eastern Melbourne like a social lobotomy. It will not only ruin the properties and lives of those along the corridor, it will feed high-rise ghettos for Third Worlders along its route and funnel waves of machete-wielding negros from Dandenong right into the heart of Melbourne.

But don’t mention the ‘N’ word.  That is the Dandenong Negros crime rampaging across Melbourne.  Remember Moomba’s Negro Race Riot last March?   Shh !  They got their own special Moomba Court, and will probably get slap on the wrist 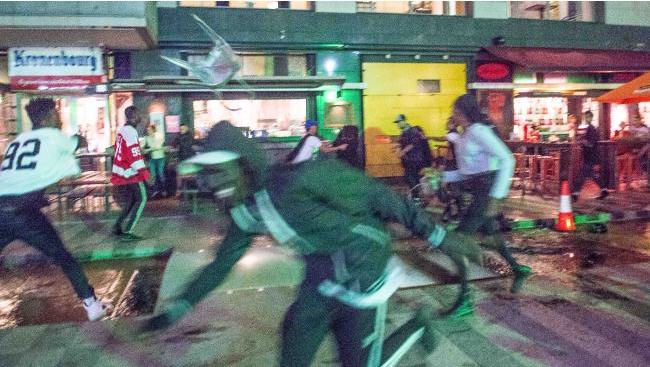 If you drive any car made in Europe, expect to be carjacked, if you are ‘White Privilege’.  (Actually we prefer the term ‘White Franchise‘ – our destiny for our White Australia).

Carjacking is a Third World gang preoccupation, common amongst underclass Third World immigrants dumped into White nation states in cities of American White Franchise.  The main culprits are hispanics in the US, and negros in what was White Franchise South Africa. 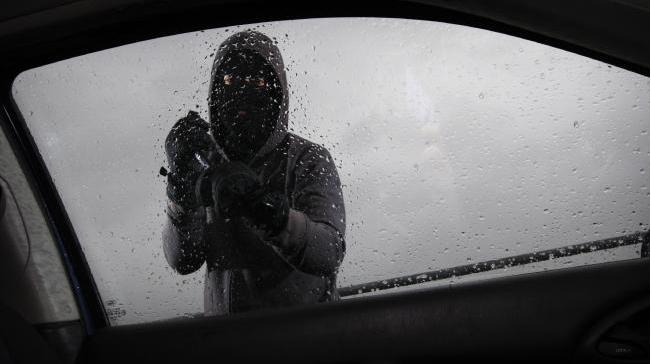 You don’t have to be too smart ta do da deed, bro.  The modus operandi is (1) bump a White Franchise’s Merc, Beemer or Audi from behind.  (2) When driver gets out to check damage, threaten with baseball bat/machette, then (3) take car.   That is why low life Third Worlders do it – easy peasy.

Thousands of black as the ace of spades Sudanese and Somalis have been dumped on Melbourne in selected ghettos, and under multicultural doctrine told they can stay African and do as they would in Africa, ignoring Australian laws, values, standards.   Of course, now there are gangs and they’re as violent as in the civil war-torn horn of east Africa.

They are underclass and they have started to realise that they shall never attain Australian White Franchise. 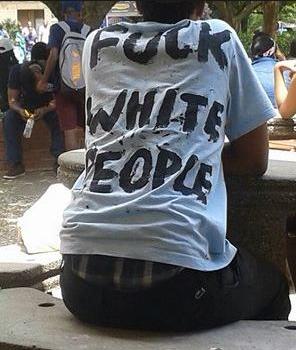 And with every new wave of ethnic invaders from da Third World let in by leftist Immigration criminals in Canberra, the local state police set up a dedicated ethnic crime squad.  Think Vietnamese, Middle Eastern, Pacific Islander, now Negro mudfish – but they don’t call it what it is.  In the case of these negros, the Victoria Police have already set up Taskforce Ares and Taskforce Tense.  Send the bill to Canberra Immigration!

Melbourne now has a plague of carjackings and home invasions caused by these negro gangs. The hoodies target Melbourne’s White Franchise in the affluent leafy suburbs like Toorak. 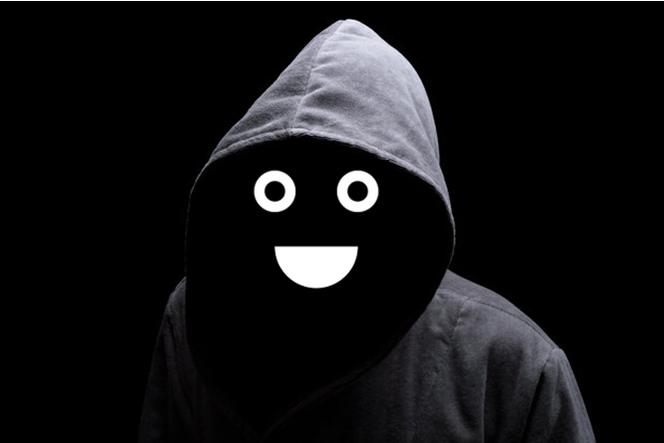 The same teenage negro gang that rioted with baseball bats, machetes and iron bars through Melbourne during Moomba last month are rampaging again.  The violent negro ‘Apex’ gang from notorious refugee burdened Dandenong is behind the latest spree.

Apex is being held responsible for the vicious assault of a Mercedes driver on ANZAC Day and a subsequent home invasion in which the man’s luxury car was used.

Michael Tallal (29) pulled over his Mercedes car on Toorak Road in Toorak at 2am on Monday after it was hit from behind by another car, believed to be a grey Nissan.  When Mr Tallal got out to speak with the other driver, he was attacked by “five or six” men and hit on the head with a baseball bat, police said.  The men then demanded Mr Tallal’s mobile phone before ordering him to hand over his car keys. They then sped off in the Mercedes.

Mr Tallal, who went to hospital, said his glasses and watch were smashed during the attack as he was attempting to shield his face.  When he was released from hospital, he said, he found out his car had been used for “numerous other crimes” including a home invasion in Cranbourne. 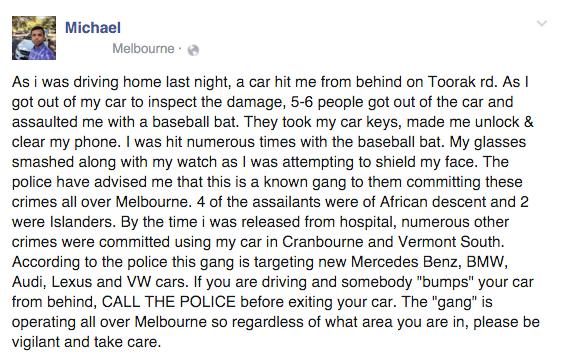 Carjackings are on the rise across the city and many communities are becoming increasingly fearful.   Earlier this month after a carjacking in Elsternwick, businessman Avi Yemini set up a Facebook page called J-Safe for victims of such crime, Mr Yemini said the page had been created in response to an increase in crimes against members of Melbourne’s Jewish community.

On the night of February 14, 2016 a 39-year-old male negro went on a carjacking spree in Melbourne’s CBD, threatening to kill a woman and her young child. 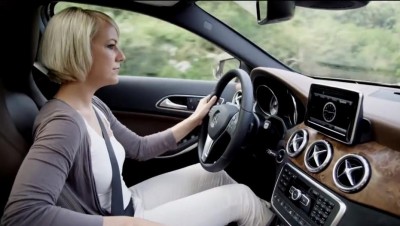 He started in Melbourne’s busy CBD at the intersection of Williams and Collins streets about 7pm, where he attempted to steal two separate cars from two different owners.  He was not able to steal the BMW and Ford so he targeted a third person who had a Toyota Echo.  Police say he drove dangerously down Flinders Street before crashing into a taxi outside Federation Square.

Police were told the man was driving on the wrong side of the road and on tram tracks.  He then crashed into another car, a Ford Ranger, at the intersection of Russell and Flinders streets.  He drove to Glen Iris where he crashed into a BMW, which he then tried to steal.  It turned out he couldn’t work out how to drive the luxury car so he targeted a nearby Honda and threatened to kill a woman and her child.

A witness told the Herald Sun the thief informed the mother he had a gun and wanted her car keys.

“He was off his face on drugs,” she said. “The kids ran out of the car screaming and she got out and gave him the keys. “It was pretty horrific.”

The man then sped off and crashed into another car.  Police said they were onto him by this point, but there was no pursuit.  The man lost control of the stolen car at the intersection of St Kilda Rd and Commercial Rd and fled the vehicle and attempted to run away.

Police chased him and arrested him about 7.35pm.  He will front the magistrate in Melbourne later today and is expected to be charged with a number of offences.   How about deportation?

On Tuesday, Assistant Commissioner Bob Hill said there had been a spike in car-related crime, “where the Mercs, the Audis, the BMWs are parked in the driveways and streets of our leafy suburbs”.

“Look in the rear vision mirror, how many people are in that car? What are they doing?” said Assistant Commissioner Bob Hill.  If you are hit from behind, lock the doors and windows and drive to the nearest police station.  If you don’t get the rego of the other vehicle then probably your insurance company won’t pay up, but at least you’ll be alive to Facebook the account.  This is the new Joburg reality.”

Dan Andrews is silent and in denial.  He has told police to advise the Melbourne public “to be vigilant”.  Useless apathetic advice. How about being vigilante and carrying a loaded shotgun?  If the police don’t care and won’t act, then Ordinary Australians need to defend themselves however they see fit.  Buy a baseball bat.  Get a gun license. Get a bullbar and toe bar fitted to your vehicle, and don’t stop for no negros!

Melbourne’s negro immigration has made it a carjacking Joburg. 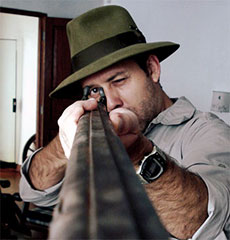 Dan Andrews has urged the public to increase their personal security while officers step up street patrols. What a useless patsy!

New Melbourne Defensive Driving:  If at night you see a black man standing on the road in front of you trying to hail you down, best not to stop, but accelerate and just say you couldn’t see him because it was dark, and argue self-defence.

They’re calling it the Mercedes Puma and is fully mudfish-kitted.  Though not cheap, apparently orders are filling fast. 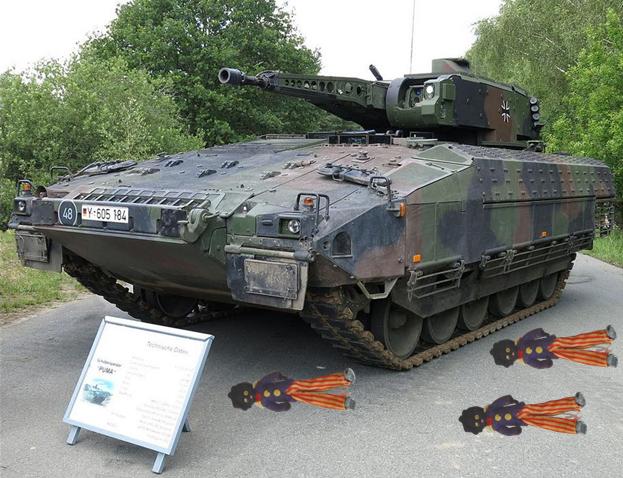