Notorious amongst the mob was a hardcore Trotskyite ‘Socialist Party’ heavy, one Anthony Main, aged 36.  Main artificially secured a stint as Socialist Party councillor in January 2011 with the City of Yarra, a small multi-ethnic melting pot of Melbourne’s inner city Richmond.  Strangely he has since become persona non grata at 333 Bridge Road.

Main has a history of intimidation and thuggery in Leftist protests and usually can be seen up the front looking for trouble.  Many nationalists have observed his presence and affray at such rabble opportunities. 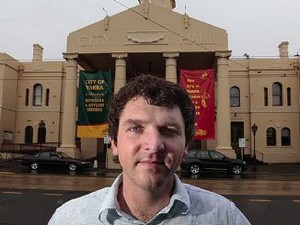 So last Tuesday, February 19, 2013 saw Anythony Main up the front of the anti-Wilders protest leading his skinhead bovver boys ready to put some steel-toe boot into guests paying $66 each to hear MP Wilders speak.

The Socialist Alternative’s forty odd protesters positioned themselves at the gate entrance to the venue blocking access to the invited guests.  Activists pushed and shoved guests to stop them entering, and linked arms to try to form a blockade.  The activists ripped up guests’ tickets.  Tony Iltis, from the Socialist Alliance was present.

At over six foot tall, Main is clearly observed with short curly black hair in his nondescript grey shirt at the front of the protest.  On two occasions he assaults a senior gentleman who was trying to gain access to the venue. Main assaults the same man on two occasions throwing two separate invited guests to the ground, including the senior gent . 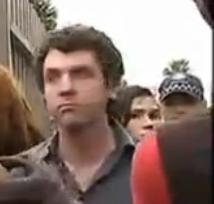 Main caught on video at the Somerton protest

Anthony Main, here is in a long-sleeved grey shirt.  He can be first seen in this video at 0.16, then again at .24 and .34 seconds, assaulting invited guests and throwing them to the ground.  Main is an outright thug who deserves time at Barwon Prison, bench pressing in the gym, Vaseline at the ready. 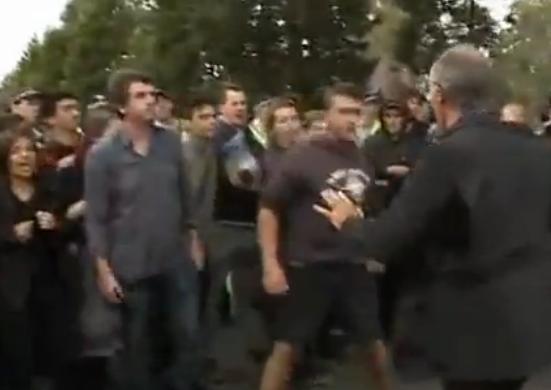 Main is now wanted for assault.  Witnesses at the protest, those invited guests who were present, are asked to come forward and to contact Crime Stoppers Victoria on 1800 333 000 to say what they saw. 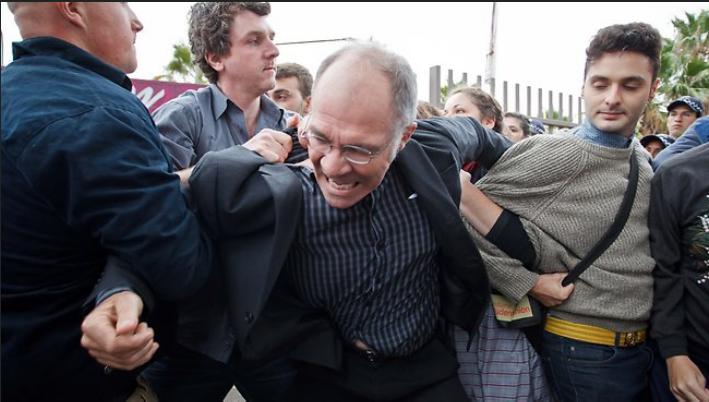 Information can be made safely anonymously to Victorian Police.  Any information will assist in the arrest and criminal conviction of this Trotskyite thug.  It is only a matter of time before Anthony Main’s violence kills someone. 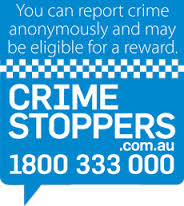 Riot police with horses eventually arrived.  Police Senior Sergeant Michael Maloney has said no arrests have yet been made, and that sixty police were despatched including the police riot squad on horseback, as well as a ring of steel unravelled around the venue to protect Mr Wilders and his guests inside.

City of Yarra councillor Anthony Main has form.  In 2011, he led a rabble of 30 protesters at an International Women’s Day event in March of that year.   Main was accused of threatening behaviour against female unionists and shouting derogatory abuse at them.

Victoria Police confirmed that property was damaged and federal Families and Indigenous Affairs Minister Jenny Macklin, who had addressed the event dinner, had to be escorted from the Trades Hall after protesters blocked her exit.   The tyres of Ms Macklin’s Commonwealth car were also slashed, forcing her to depart in another vehicle.

Main is also head of militant union Unite, as its secretary since 2003.   Not surprisingly, Unites campaigns have concentrated around Main’s inner north and east Melbourne turf with notable campaigns like ‘Name and Shame’ along Brunswick Street, Fitzroy and Main’s personal campaign to unionise Borders Books along Lygon Street, Carlton.

In October 2012, Main while councillor with the City of Yarra council pushed the idea of having his council heavies patrol known violent taxi ranks at Melbourne’s crime hotspots in Brunswick Street, Smith Street and Swan Street.

Not unsurprisingly, Main didn’t like the idea of CCTV at the same time.  Main and his thugs don’t mind a bit of bovver, so it would have been fun thuggery practice, out of sight… 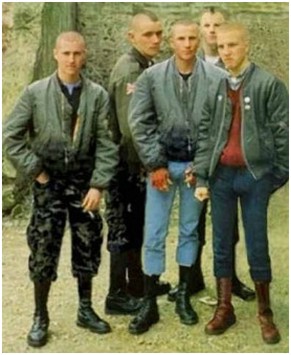