So we see another overpaid Arab rorting Australian taxpayers while sacking 1900 posties, installing dodgy asylum seeker scab labour and ripping the integrity out of a once proud vital national public service. 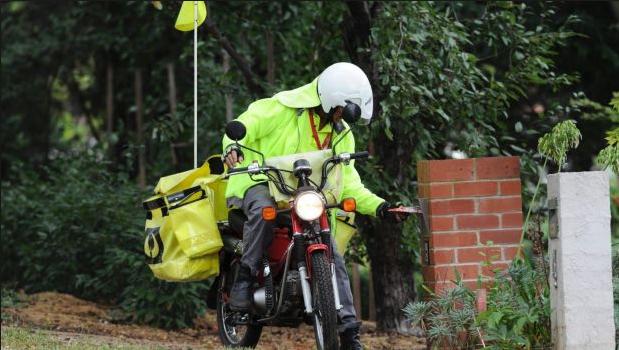 The arrogant Islamic Ahmed Fahour and his $5.6 million salary package is now Goneski! after public pressure for his to resign.  Yet the Board has let him rort Australian taxpayers over seven years and then guaranteed him a further $1.8 million annual pension every year for the rest of his life!

The rorting elitist Australia Post Board needs to be sacked immediately. Here they are, the unaccountables. 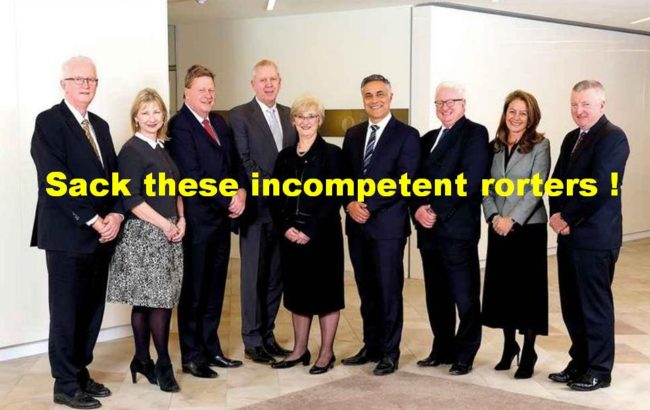 Why was the Australia Post Board permitted to hand such an important government public service job to a foreign Muslim Leb anyway?  What was so wrong with selecting a local qualified Australian – someone who would respect Australian public service standards, Australian jobs and turn a respectable profit?

What knowledge, experience, expertise does any of the Board member shave in logistics, postal services, freight or even public sector employment. Squat?

Ahmed has hoodwinked them like a sheikh with no clothes. 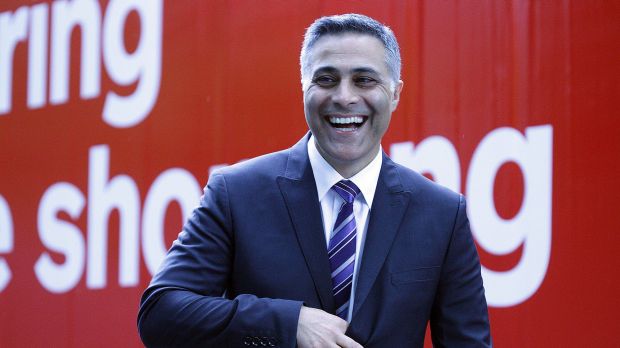 Consider what this anti-Australian bastard did, besides lining his own pockets? He sacked 1900 Aussie posties, replacing them with two-bit Third World asylum seekers with no background checks – so they could to throw parcels, not deliver at all or just steal the post.

Ironically, Ahmed Fahour claims he sent off his resignation letter in May 2014, but couldn’t officially announce his departure until the letter was received by the board, which occurred yesterday. 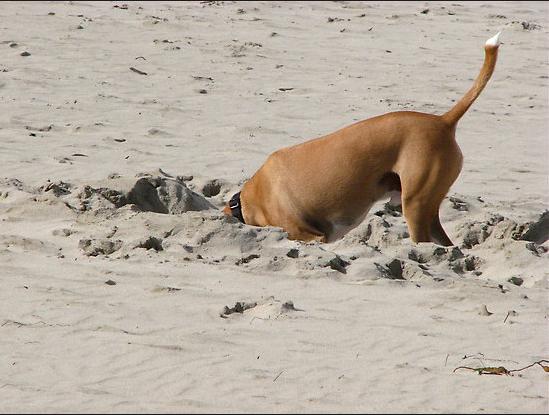 Customer Jennifer English Poole vented on Facebook after tickets for her daughter to see The Wiggles at Sydney Opera House on Australia Day turned up the day after the concert. “Awesome effort. Not sure what we should do with them now as obviously we missed the concert,” she wrote.
‎

Miradija Fitzell complained it had been a week since she sent an Express envelope from Adelaide to Darwin. “A week! It’s been sitting in a Darwin post office for seven days. Last time I’ll pay for Express,” she wrote.

Helen Dawes added: “Christmas presents delivered to Western Australia today. Only taken six weeks to get there. My grandchildren get their presents, I suppose better late than never. Would like reimbursement for my Express postage.”

In February 2016, Far North Queensland couple Mark and Jharna Hogan were shocked to discover a parcel containing hearing aids worth thousands of dollars casually chucked on their front lawn.

And late last year, Sydney business owner Julie Salama was outraged when CCTV footage captured by her home security system caught a lazy postie in the act of giving her ‘the slip’ without even attempting to deliver her parcel.

Joe from the Perth suburb of Beeliar had arranged a registered post service to deliver his son’s passport, only to find it opened and shoved in his letterbox (below) despite requiring a signature to be delivered. 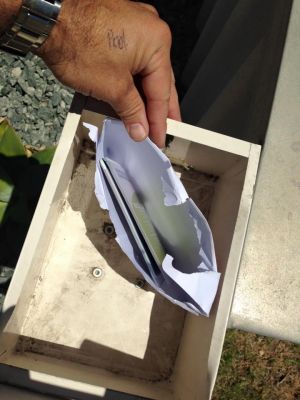 Customer complaints are at an all time high – lost letters, long waiting times, package delivery failures, outright theft – yet Sheikh Ahmed has kept them secret so he looks good to the Board. 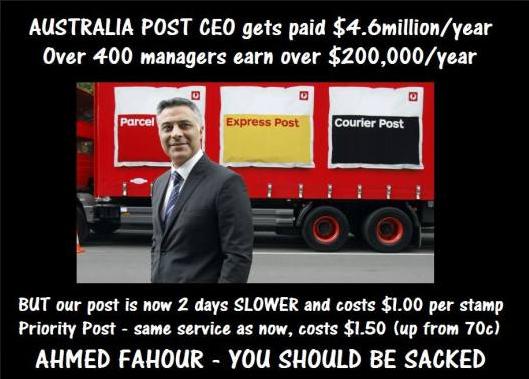 Read our previous article from November 7, 2014: ‘Australia Post missing mail crisis is symptomatic of the corrosion of our Public Service‘

On his CV, Ahmed was a consultant at Boston Consulting Group doing mergers and acquisitions. He creaming commissions from merchant banking at greedy Macquarie Bank and foreign Citibank before he landed the plumb government job. 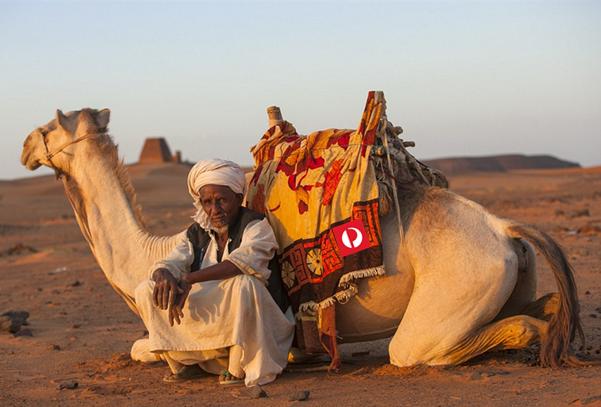 Ahmed Fahour’s Lebanese family business was in Middle Eastern bread making out of Melbourne’s ethnic Lygon Street.  The entire herd of ten lived in a squat above the shop.

Yet yesterday upon announcing his resignation, lying by saying it was “completely not true” to say he had resigned because of the salary issue, this now elitist multi-millionaire dares disparage Pauline Hanson for calling for his resignation.  He said running Australia Post is a “little bit more complicated than running a fish and chip shop“.

Islamic Ahmed wouldn’t know what fish and chips taste like – it’s not halal.

Lebanese pita bread doesn’t even compare with Fish and Chips

So what did Ahmed actually do at Australia Post anyway besides his mass sackings, splurging $400 million on StarTrack, $100 million on Aramex, running down the Post’s service reliability and parcel market share?  In the corporate world, it’s termed ‘cash draining’.   He continued his M&A camel trading, increasing prices, culling services and delivering boastful public speeches. 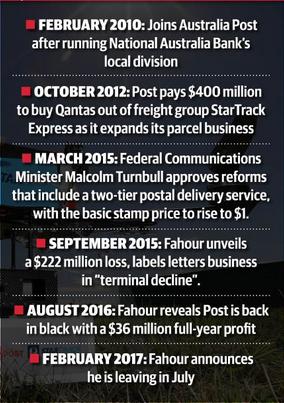 In 2014-15 Ahmed pushed Australia Post to a $222 million after-tax loss, despite over-inflating the price of letters and parcels. Last year he fudged a $36 million profit just ahead of his looming departure so he could personally reap a massive bonus.  Recall he had resigned in May 2014.  Last year’s numbers are creative accounting smoke and mirrors from the Balance Sheet.

But Post chairman John Stanhope still thinks the sun shines out of Ahmed’s arse.  “By remaining a self-funded business, the taxpayer avoided a potential $6.7 billion bailout over the next decade.”   Australia Post has always been a self-funded government service.  Stamps were never free.

Meanwhile corporate rivals Japan Post’s control of Toll Holdings and FedEx’s control of TNT, and DHL have seen faster growth in their profits and market share.  Australia Post has been so slow and backward in it’s uptake of e-commerce, technology and computerization.  It is only now thinking of overseas expansion into Asia.  How “future ready” has Ahmed made Australia Post?

So why didn’t the Australia Post Board select and Australian with experience running logistics instead of a bloody banker like Ahmed Fahour.  Must have been cronyism and backhanders involved.

Labor’s PM Bob Hawke in 1989 had no right to corporatise then the Australian Postal Commission.  It achieved nothing for Australians.  All we have seen is the Australia Post Board approve some multinational corporate salary of $5.6 million for a multinational Arab – more than 10 times that of Australia’s Prime Minister?  Are they so misguided as to think Australia post is a private corporate instead of a public service? How much is each of the board members on?  Sack the bastards!

The corrupted neo-liberal Institute of Public Affairs, Australian Competition and Consumer Commission (ACCC) and the Productivity Commission all want to privatise Australia Post to promote better services for consumers.

So give us an example of where privatisation has resulted in a better outcome for Ordinary Australians – as either employees or customers?

Ahmed Fahour is set to retire to his palatial digs at Invergowrie Estate, 21 Coppin Road in Melbourne’s exclusive suburb of Hawthorn.  He only paid $20 million (just five years income) and rumours have it that he is set to build a $4.5 million mosque out the back, complete with minarets. 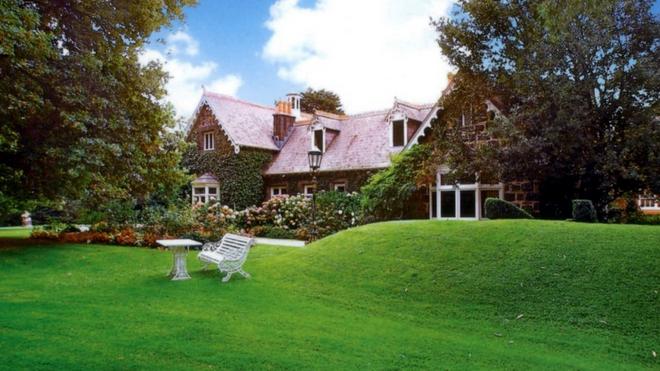 Islamic Ahmed’s renos follow his personal $2 million donation to a new Islamic Museum of Australia in June 2014 in Thornbury which was opened by the then Liberal Party federal Treasurer Joe Hockey, a Lebanese.

His donation of 2 million matches his CEO bonus received from Australia Post after sacking 900 staff, meaning that the museum has blood on its hands.  Ahmed is not just a donor, but the patron of this so-called ‘museum’. It is his pet socio-political project to promulgate Islamism across Melbourne.

What is the museum used for?  It is a front for the Islamisation of children of Arab migrants to Australia. It is a political museum under the guise of being a charity.

Mr Fahour said he and his family had been able to make a “substantial contribution’’ to several not-for-profit organisations in recent years.

“Earlier this year, I announced that my family had contributed $4 million to the Islamic Museum. We have also made contributions to a number of other community causes such as schools, sporting clubs and the arts,’’ he said.  All Islamic!

In the days of early White Christian Melbourne, the property’s original owner was English theatrical entrepreneur George Coppin, a Freemason, who later as a local politician helped establish the post office savings bank.  Old George would be turning in his grave.  Later utilised as a finishing school, the estate trained 2000 young ladies from Melbourne’s independent girls schools. 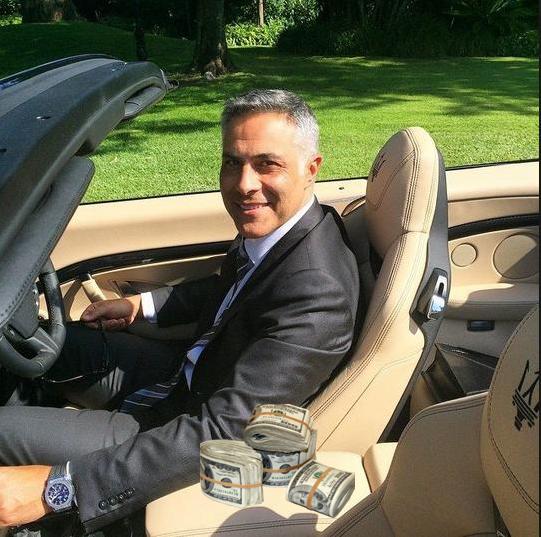 ‘Neither snow nor rain nor heat nor gloom of night stays these couriers from the swift completion of their appointed rounds.’

Australia’s postal service was officially born on 25 April 1809, when a former convict named Isaac Nichols was appointed to take charge of all mail arriving in what was then called the Colony of New South Wales. 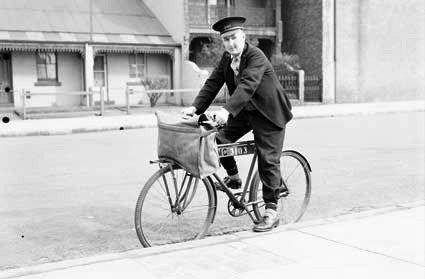 The Honorable Critical Public Service – ‘the mail must be delivered‘.