Friday’s much propagandized legal union between activist lesbians Christine Forster and Virginia Edwards was but another Canberran construction.  It is not a legitimate marriage. It was never a quiet private affair, but always a political campaign milking the media as pin-ups pushing to thrust deviant marriage upon Australians.

Yet the Marriage Equality (Same Sex) Act 2013 was voted on by dual citizen parliamentarians in breach of The Australian Constitution of 1901, so their laws passed like this one carry no legitimacy.  We don’t recognise your law, we don’t sanction you evil fringe dwellers imposing your warped deviance upon Australian decent mainstream society.

Of course the lesbian union couldn’t be consecrated on a Sunday nor in a chapel.  These witches have not so much as tied the knot, as rather blown on knots. 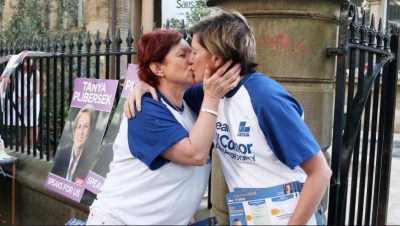 The deviant campaign to lowering the aged of consent is next – as the cult heads towards its pedophilia utopia.  They are condemned to be Australia’s true stolen generation and the church appropriately shuns them as an evil sex cult.

“I and a lot of other people want to indoctrinate, recruit, teach, and expose children to queer sexuality AND THERE’S NOTHING WRONG WITH THAT.  We want educators to teach future generations of children to accept queer sexuality. In fact, our very future depends on it.”

July 20, 2005 marked a very significant step towards leftard totalitarianism in Canada.  Free speech, the rights of parents, the right to preach and practise one’s religion and the worn and tattered fibers of normative decency were all deeply damaged. With the legalization of same-sex “marriage” what had been aberrant only a few years earlier became entrenched as a legal right, and what had been a normal and natural view of sexuality had been reduced to the retrograde thinking of hate crime dinosaurs.

Normally, the first thing we notice about a person is their sex, and the first thing we realize when thinking about the sexes is the obvious physical complementarity of male and female, but in the new SSM regime these simple and obvious truths must be appended with a caveat saying that there is no such thing as nature, human sexuality is plastic and there is nothing essentially organic, good and true. This is hugely significant for the psycho-sexual formation of the young and for the happiness and flourishing of individuals and society as a whole, but it is also a decisive step towards the destruction of critical intelligence, the cultivation of abject dependence, and then finally madness and totalitarianism.

The leftard agenda to redefine marriage is a form of incremental totalitarianism.  Terrence Prendergast is the Catholic archbishop of Ottawa. Speaking at St. Thomas University in Minnesota in 2012, he outlined the consequences of same-sex “marriage” in Canada:

The legalisation of same-sex “marriage” is recognised by Christians as perhaps the single most audacious social engineering experiment in First World history. 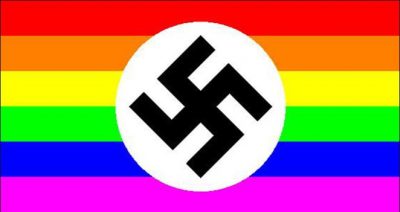 The stolen rainbow in yet another leftard campaign: ‘Fascist Deviance’ of society’s children – “getting ’em young!“

In natural truth, a ‘rainbow baby’ is a child born to a mother who has suffered a miscarriage or stillbirth in a previous pregnancy. For many grieving mothers, this baby is the light that comes after the tragedy of losing a baby — just like a rainbow.

It has nothing to do with lesbians and homosexual men buying children for their own ideological and perverted gratification. 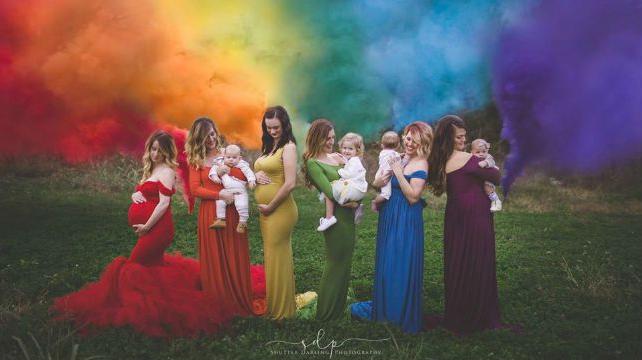 All along it’s been about deviants getting their grubby hands on innocent children.  Australia’s own social engineering program has already launched, disguised as the ‘Safe’ Schools Program, indoctrinating children into perverted LGBTTQQFAGPEDOBDSM+ debauchery, without any consultation with parents. In fact, children are taught how to lie to their parents about their online searches to over 18 websites, and they’re told to ask their school to unblock them. 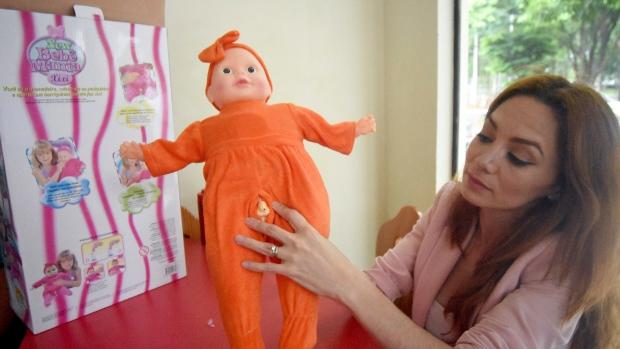 Publicly the person who set up the Safe Schools Coalition brainwashing programme reckons it’s justified by there to stop bullying and suicides, but Marxist founder co-founder Roz Ward told her Marxism conference it was part of a wider cultural Marxist strategy to radically undermine decent, traditional societal values and to ultimate outlaw Christianity. If you live in Queensland, parents are not told that their child’s school is participating in this perverted leftard curriculum. Parents instead must find oiut for themselves and then approach their child’s school to question of their children are being exposed.  They are legally permitted to withdraw their child from the programme, but this right is kept secret by the government. 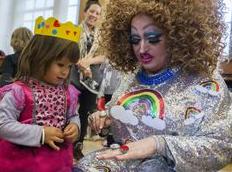 “Mummy, he said I looked pretty”

Childhood and puberty are the most dynamic periods of psycho-sexual development and all homosexuals puzzle over their sexuality. Unlike animals whose sexuality is purely instinctive, human sexuality is a combination of instinct and socialization. There are many contributors to a child’s socialization; family, peers, schools, culture, but all of these are overseen by the state that has the power of laws and punishments.

Deviant Marriage advocates have requested the voting age for the upcoming plebiscite into Gay ‘Marriage’ be lowered to include graduates of the Safe Schools [Indoctrination] Programme. Further evidence of their cunning plan.  And anyone who dares to question the validity of the Safe Schools programme is shouted down as a bigot. How can we possibly have an honest debate in this volatile environment?

The sick bastards are now going after toddlers – getting ’em while they’re young.

Canberra’s leftard legalising of deviant marriage is a social perversion wedge causing normal parents to lose their freedom to have their children sheltered from radical LGBTTQQFAGPEDOBDSM+ sex education in schools, which is becoming widespread and compulsory.

In 2013, Safe Schools Coalition Victoria announced their partnership with Early Childhood Development, celebrating their ‘Supporting Sexual Diversity and Gender Diversity in Schools’ policy. What could a toddler possibly need to know about sexual diversity?

“Children are sexual beings and it’s a strong part of their identity, and it is linked to their values and respect.” Clare McHugh – spokeslesbian for Early Childhood Australia.   Should a toddler’s teacher be referring to his/her private parts at all?  This so called anti-bullying programme doesn’t even touch on the most common reasons for bullying – weight, height, appearance, race, IQ, sporting ability.  It’s just perverted brainwashing by an evil sex cult.

South Australian Bishop of Port Pirie Greg O’Kelly is one of a number of clergy who have spoken out against same-sex marriage in response to recent moves to legalise it in Australia.  Back in 2015, O’Kelly warned about legalising same-sex marriage, saying children of gay couples will see themselves as a true ‘stolen generation’ because they have been denied a mother and a father.

This real stolen generation through the of technology to sever a child from its biological parent in order that same-sex couples could realise their desire to raise children in their perverted mould.

This is another example of Canberra policy requiring a child to miss out on his or her mother or father. 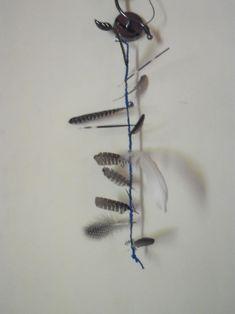