‘Australian nationalists have noted of late, various commentaries in critical magazines about challenges to liberal-globalist ideology and politics from various ‘right-wing’, ‘Alt-Right’ and otherwise supposedly ‘sinister’ forces.  Of course, any criticism of liberal-globalism may serve a point and it may serve to awaken people to other ideas.

However, to build any mass-based Australian nationalist challenge to our liberal-globalist system demands an Australian ideology – and then, a politics derived of that ideology. 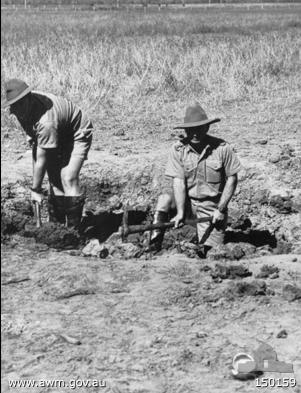 1942: Diggers outside Townsville digging up Jap bomb fragments on their Aussie soil

It is with this in mind that we assert that Australian nationalism is ‘native to the soil‘.

In his discussion of culture and how it develops in Australia, Percy Stephensen observed that our Australian Culture “grows fully formed from the head of Jove” (that is, from our European roots) and that “we inherit” all of that by virtue of who we are – but then he said, “we go on” to our new native-Australian identity and reality. 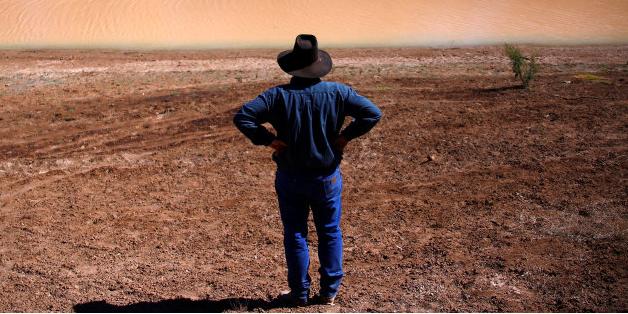 European sources, but never so much that it kills the “native plant”.   In other words, we are an adaptive ‘New Nationality’.

The nationalists consider those points on culture fit to the discussion on ideology.

Yes, we inherit the fully formed and general critiques of liberal-globalism. And yes, we look from time to time at some clever advance in that from anywhere, but at every moment we look to see where all this fits within our Australian reality.

Of course it also follows that if something does not quite fit, then we do not adopt it, regardless of how shiny it may look.

So today, we return to Jack Lang, a hero of the people’s struggle for Australian independence and for our national identity.

Jack Lang was the Premier of New South Wales during 1925-1927 and 1930-1932 when he was deposed by a state conspiracy to protect banking and financial interests.

In this extract from his book, ‘I Remember‘, Lang gives a brief history of the White Australia Policy; exposes how Britain interfered with local attempts to keep the hordes of non-European immigrants from flooding into our country in the nineteenth and early twentieth centuries; and praises the policies that established White Australia.

Warnings of the Asian Tidalwave back in 1956:

Listen to excerpts from the peoples champion, Jack Lang’s in his book of 1956  ‘White Australia Saved Australia‘: