Pauline Hanson has been noticeably silent on former neo-Nazi Neil Erikson’s support on his cesspit of a Facebook page. Mrs Hanson has failed to condemn Erikson for campaigning in her name despite his history of anti-Semitism, which he now claims to oppose, and his defamatory actions. 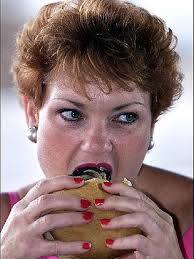 Neil Erikson, a former Hollywood Nazi bootboy was jailed in 2014 for making harassing phone calls to Rabbi Dovid Gutnick. Rather than a custodial sentence, Magistrate Donna Bakos ordered he undergo psychiatric assessment and treatment in the community. It is 2016, and Neil Erikson has burned his bridges with Blood & Honour Australia, Nationalist Alternative, and now the United Patriots Front. But more to the point he has remodelled himself with a vengeance as an active ‘anti-Nazi’, only on the basis that he was never accepted in any nationalist community because of his extreme behaviour.

Erikson was the United Patriots Front’s contact with the ‘Nazis’ of Australian nationalism, who he turned on after being chided for attempting to appropriate the French nationalist movement Génération Identitaire into an Australian anti-Islam context. Since then, this twisted gollum has been embroiled in all manner of dishonourable Facebook activity: inventing fake user profiles, harassing users, and writing boldface lies in an attempt to slander those whom he has made enemies of, or on behalf of a faction that he is now in league with.

Yesterday, Erikson published a blog in a disturbingly third-grade grammar making the most outrageously defamatory accusations against Australia First members, and others in Australia’s nationalist community.

Mrs Hanson’s brand is now dangerously blemished by this association and it must be asked how much of Erikson’s behaviour is she aware of, and is she in any way condoning his tactics.

We ask that she either qualify her support by Erikson, or denounce him as the odious leech that he is.